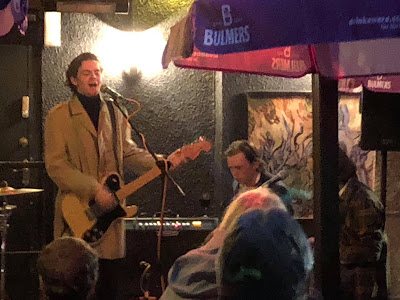 The Blinders emerged from lockdown with a stripped back "lounge lizard" set at their second and spiritual home The Rose And Monkey on Tuesday night to a socially-distanced audience of forty lucky fans who snapped up tickets within seconds of going on sale. An hour-long song set took favourites from their debut Columbia and predominantly tracks from their 2020 album Fantasies Of A Stay At Home Psychopath and reinvented and redrew them for the intimate surroundings.

Stripped down shows generally mean acoustic renditions of a band's big songs yet The Blinders have taken an altogether different approach to this live return. Setlist choices made based on what songs would fit the reworking style they've gone for and channeling the anger and desire to drive change into something less adrenaline-charged but no less potent form the basis of their approach, cognisant of the fact you can't let rip in a small beer garden in a city centre.

They start off with a long instrumental introduction to From Nothing To Abundance that sets the tone for the rest of the evening, the separation in the bass and guitar lines (augmented by Cabbage's Eoghan) and Castrey's understated drums provide a raw stark backdrop for Thomas's vocals. With the layers removed, many of their influences come closer to the surface - The Doors, Townes Van Zandt to name a couple - yet they remain just that, influences, that colour and embellish the core strength that underpins The Blinders' songs - the quality of the songwriting. 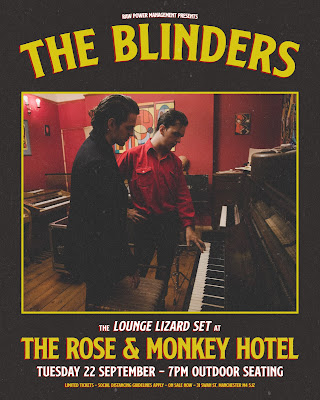 That applies across both albums of work. Something Wicked This Way Comes feels even more sharp and pointed in the chilly Manchester night air whilst I Can't Breathe Blues starts with Thomas repeating "I've got a badge" several times to build the tension. When it's punctuated by the sound of glass from the nearby Mackie Mayor being dumped into bins, he smiles, laughs to himself and says "percussion" before recomposing himself to turn the headrush anger at American police brutality into something equally as potent in its message at about a fifth of the pace.

They're clearly enjoying being back on a stage, Thomas joking that he and Charlie are like a bad smell sticking around and chiding his sidekick for leaving to go to the loo and asking him if he went up the side of a car when he returns quickly. There's also more serious moments where he dedicates a song to a lost friend and talks of the difficulties faced by both bands and venues with the lockdown and why it's so important to support both the best we can.

The Psychopath songs - Circle Song, I Want Gold and (we think) a debut outing for the album closer In This Decade - feel like they were written for just this treatment whilst Columbia's songs, with the exception of The Ballad Of Winston Smith which starts with Thomas solo and the other three joining into towards the end, feel reinvigorated and refreshed by their new arrangements. L'Etat C'est Moi's 1984 story-telling has a far more ominous and foreboding impact slowed down as if waiting for the next impending bullet that 2020 is going to fire at us, whilst Where No Man Comes' brooding bubbling discontent takes on even more tinderbox qualities waiting for a spark to lay everything to waste. The drama in early single Ramona Flowers is stretched out, extending the tension to almost breaking point and then letting it rebound back to shape.

Mule Track, all thirteen drawn-out minutes of it, brings the night to a conclusion, the four of them taking the song and expanding it, exploring avenues away from the core of the song in unison before returning back and then moving away once more. It feels both loose and freeform yet also meticulously thought through and true to the originals yet embellished with ideas that might not fit a record label's desire for radio-friendly singles.

We leave spellbound by the beauty of the set yet frustrated at the prospect of it being at least another six months before we can witness them and others unleash the raw energy of a full show upon us. Magical moments like this give both artists and fans hope that we will get back to something resembling normality at some point and remind us of the power and emotional connection of music.

The Blinders played Nothing To Abundance, Something Wicked This Way Comes, ICB Blues, Circle Song, Ramona Flowers, The Ballad Of Winston Smith, Where No Man Comes, L'Etat C'Est Moi, I Want Gold, In This Decade and Mule Track.