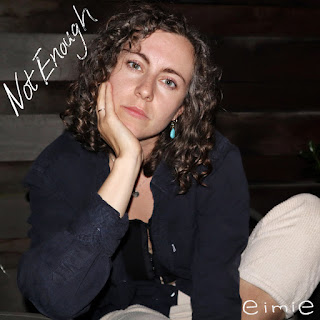 Eimie is the new solo project from operatically trained vocalist / musician / comedian Amy Webber and she has just released her debut single Not Enough. We caught up for a chat about branching out on her own, the single and its forthcoming video and how she's found ways in lockdown to perform and remain creative.

You’d previously released music as part of a duo Kaze - and Not Enough is your first release as Eimie. What inspired you to go it alone?

I've always written my own songs but I suppose I didn't really think they were anything different. I've realised that music doesn't have to strive to be "different" or "unique" (which KAZE certainly was) to be enjoyed by the listener.

I love expressing my emotions through music and just needed the confidence to release my own music. Lockdown gave me a lot of thinking, writing and recording time, so I decided it was time to go solo. It also means I don't rely on anyone else to write new songs, perform them, make videos, do social media posts etc, its just down to me which makes things easier!

Where did the idea for the name Eimie come from?

I wanted to be called "Amy" like my name but there were too many artists called Amy you'd never find me on google so I went for a pretentious spelling!

Not Enough is out now. Could you tell us a little about what the track is about?

The track is about feeling under appreciated and confused in love. Maybe you are expecting too much? Maybe they just don't like you very much? Maybe you need to love yourself before you can expect others to? Those sorts of big questions.

Does your music, and your art, provide an escape or a form of catharsis from everything else that’s going on around you?

Definitely. Its something I feel I can achieve in a day and that makes me feel good about myself. A lot of my day is spent feeling guilty for not doing enough of this or that but when I sing at the piano or write a new song that does make me feel like I've achieved something. When I share the music with others and they connect with it, that feels good too. Knowing others feel the same as me.

You’ve recently posted a teaser of the video shoot for the single. When can we expect to see that and is anything you can reveal without giving too much away?

The video is mostly me riding my bike and I loved filming it because I got to ride through some beautiful countryside while singing along to my own song haha. It was filmed by my amazing friend Grant Archer.

Over lockdown you’ve performed from a number of different locations indoors and outdoors. For someone who’s very active as a musician and a comedian how difficult has lockdown been?

I've missed performing to an audience SO MUCH!! I realise that on stage is where I feel really at home and where I get a lot of endorphins and validation (I reluctantly admit!) from. I've done some live streams on my eimie music Facebook page which I have enjoyed but I can't wait to be gigging again and trying to make people listen/connect/cry/laugh (depending on the gig and song).

Has it given you a lot of material for both music and comedy?

Yes, I did a comedy song a few weeks in to lockdown about people showing off on Instagram (making bread, doing 5ks, cleaning etc). I know I am guilty of occasionally showing off on social media but when you see people post about how motivated/healthy/happy they are it can really bring you down if you're having a difficult day. There's been a lot of emotions around worrying for the future of music and performance and that has made me question big things like what is the point to my existence etc so those deep emotions have given me lots to write songs about too.

Not Enough is your first solo single. How many other songs have you ready to record or release and what are you planning to do with them?

I have about 15 songs all together now and some more bits and ideas so I am definitely planning to record and release a second single in 2020 then hopefully my first album in 2021!

If you had to describe Eimie to someone who knew nothing about you and had never heard your music, where would you start?

I'd say go and watch all my videos and you'll see. No seriously though, I think its really hard to sell myself with words and I struggle to write words sometimes... I feel much more like I can express myself in person/video. But I'd say my music is heartfelt and catchy story-telling and hopefully my character comes across through my music too. My character is lively and always cracking jokes (with a 90% success rate unless you don't like sarcasm or dryness).

Email ThisBlogThis!Share to TwitterShare to FacebookShare to Pinterest
Labels: Eimie