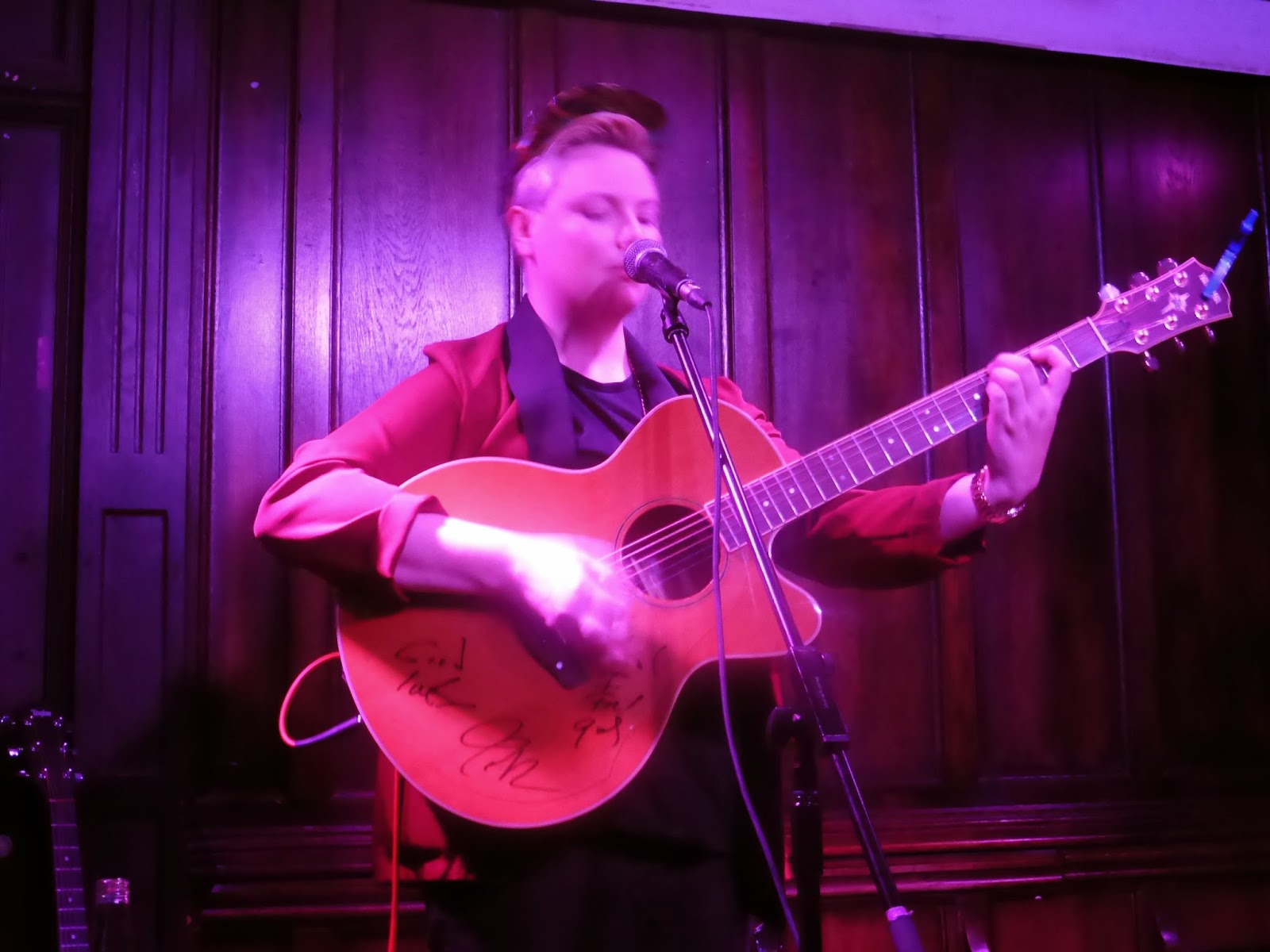 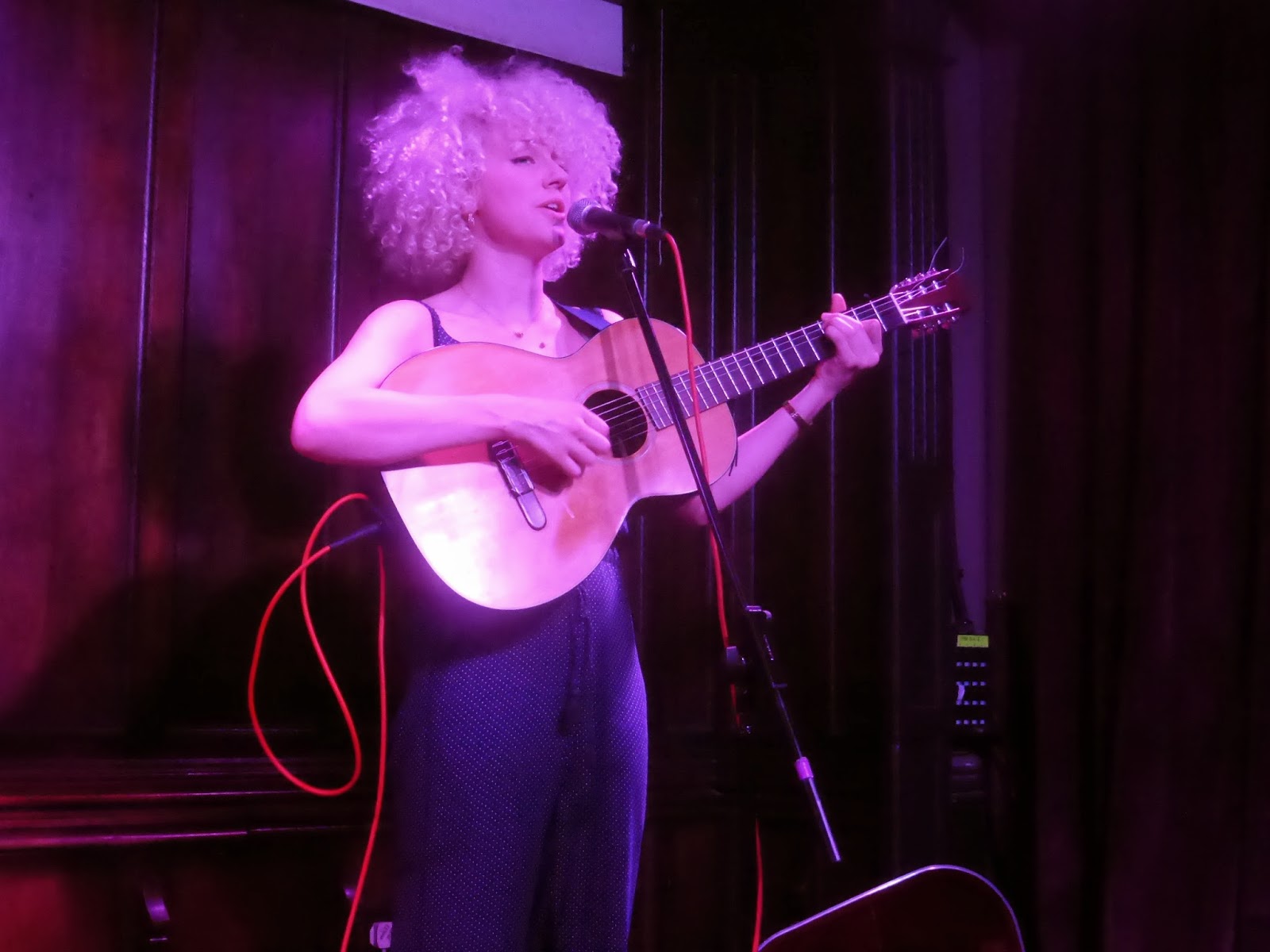 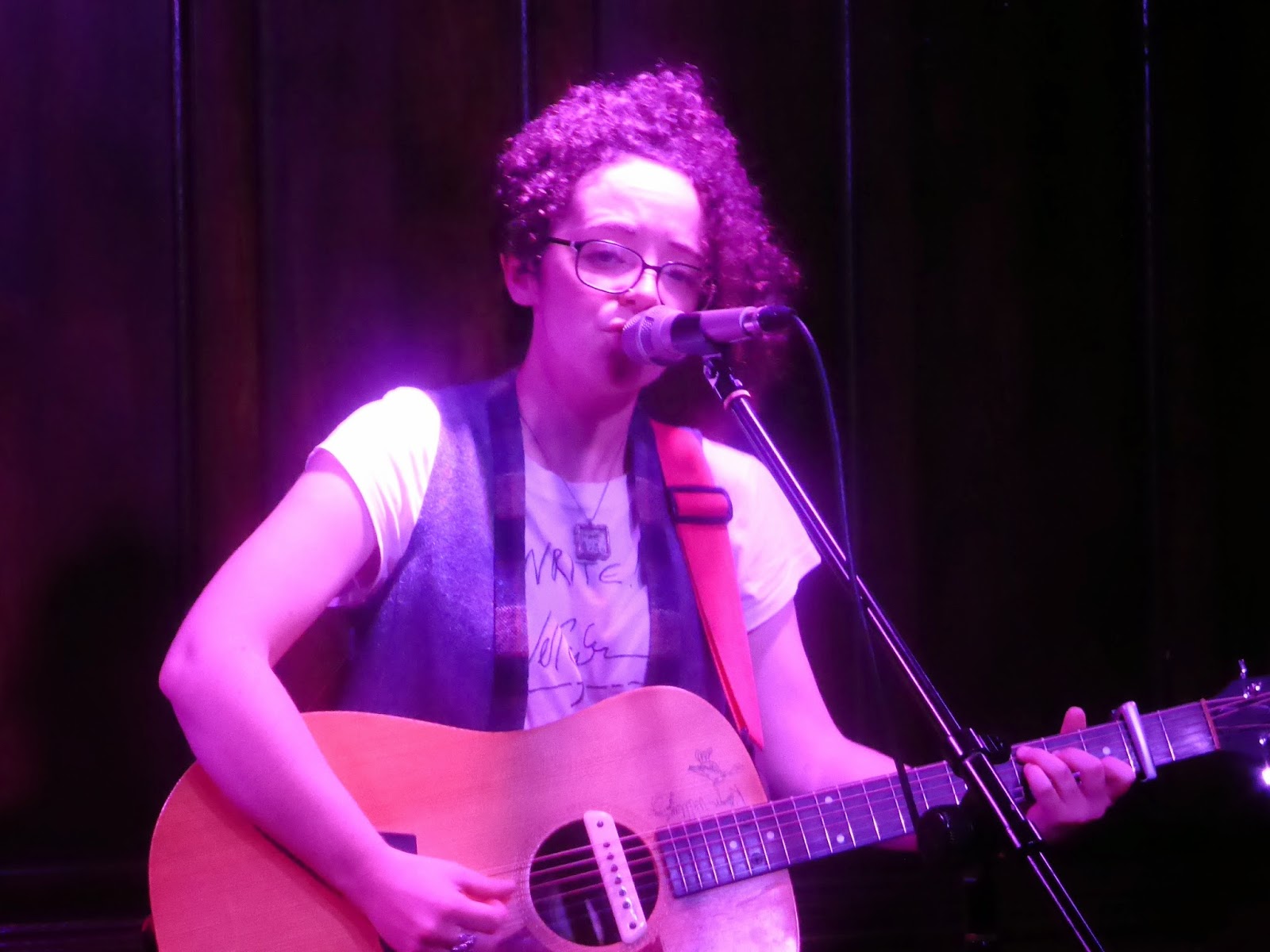 Kal Lavelle and Fiona Bevan have been touring the UK this summer playing co-headline gigs and running songwriting workshops for girls as part of their Song Sisters project to try and increase the number of young women writing and performing music.  We went to their sold out gig at The Castle in Manchester.

We will be interviewing Kal and Fiona about Songsisters later this week, but it's worth pointing out here that they are trying to increase the frankly shocking 13% female proportion of all songwriters registered with the Performing Rights Society.  Prior to the gig they held a two hour songwriting workshop and it was good to note that the audience reflected their target group far more than most gigs in this area of town do, even when the line-up is all female singer-songwriters.

As well as the workshops, they've encouraged female singer-songwriters to upload videos to You Tube for them to choose the support each night of their tour, another fantastic idea to increase exposure.  Tonight's winner was Little Rach.  We'd stumbled across her just a week and a half before at an open mic night at The Yard in Alderley Edge, where she'd wow-ed us and everyone else with a cover of You're The One That I Want and a song entitled Rice, which was about her iPhone being rescued from falling in water by placing it in a bag of rice.  Yes, that sounds terrible, but actually it was a genius piece of storytelling set to music. 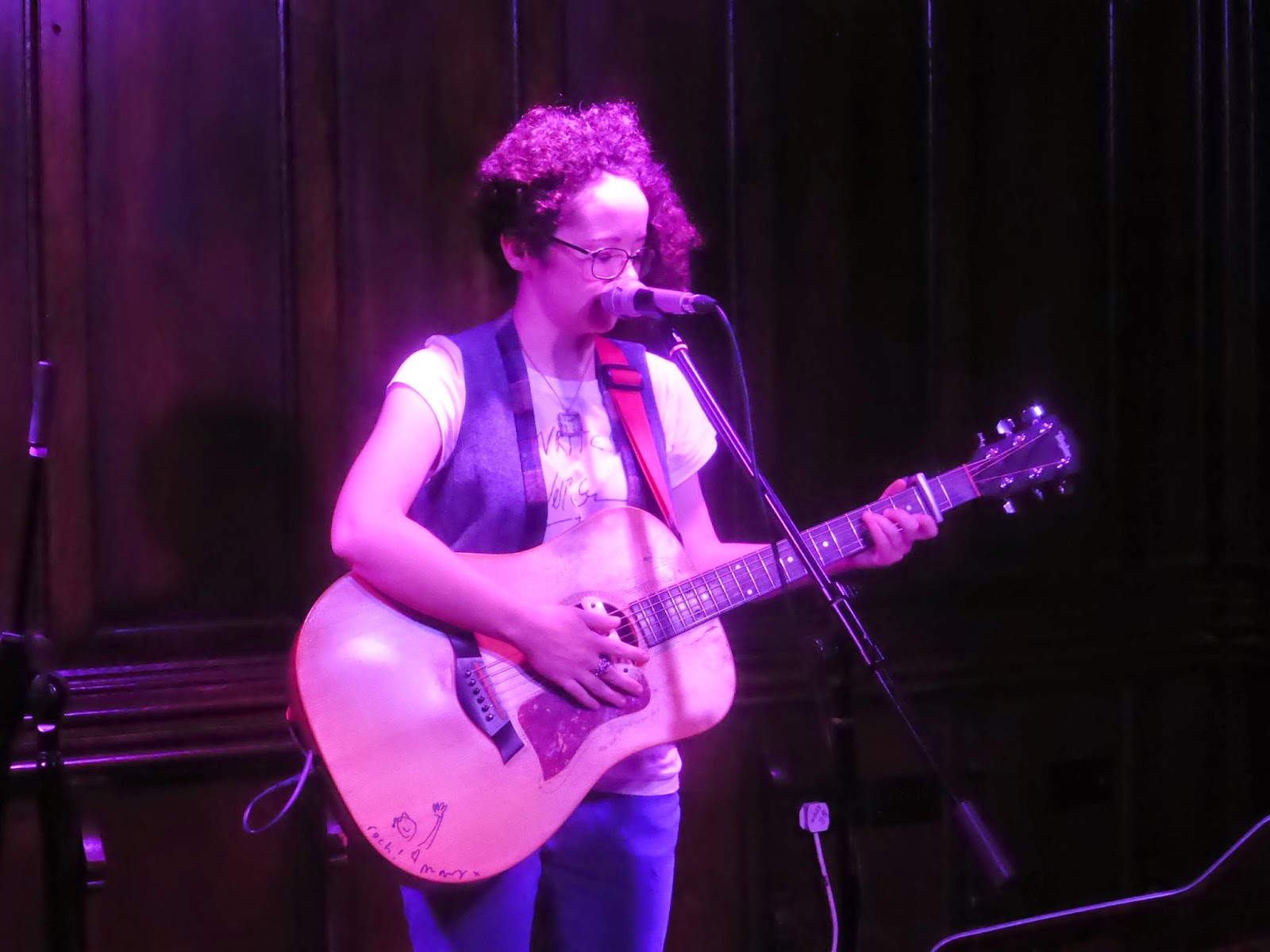 We see a very different side to Little Rach tonight though, she's a very accomplished songwriter and already a master at winning over a crowd, not just with her music, but also her charm.  She regales us with slightly off-kilter stories of an old woman dressed as a witch selling pictures with her on her broomstick and going to the Lake District on holiday without a coat and we're all enraptured.

Behind the slightly unusual offer of free biscuits hides someone who can write deeply emotional songs like opener The Secret and The Bohemians, whilst not being afraid to be more playful so we also get the rice song, which at the end of she gets the audience singing "all hail the rice".  Set closer Made To Love Music is the perfect anthem for any singer-songwriter - "I was made to love music, thunder was made for the clouds, just as the birds know the land from the sea, I know music was made to love me"

Little Rach is a perfect example of why the Song Sisters project is needed to support young female songwriters.  The music industry and promoters would generally cock a snook at her because she doesn't fit their marketing criteria for young female artists, mostly which have to do with image and little to do with song writing ability. She's also very prolific as three songs of her set don't feature on her debut album If You Go, released only a few months ago. She's brilliant and no one leaves the building at the end of her set thinking any different.

Little Rach played The Secret, If You Go (Shadows In My Mind), The Bohemians, Rice, I Need You (I'm Calling) and Made To Love Music 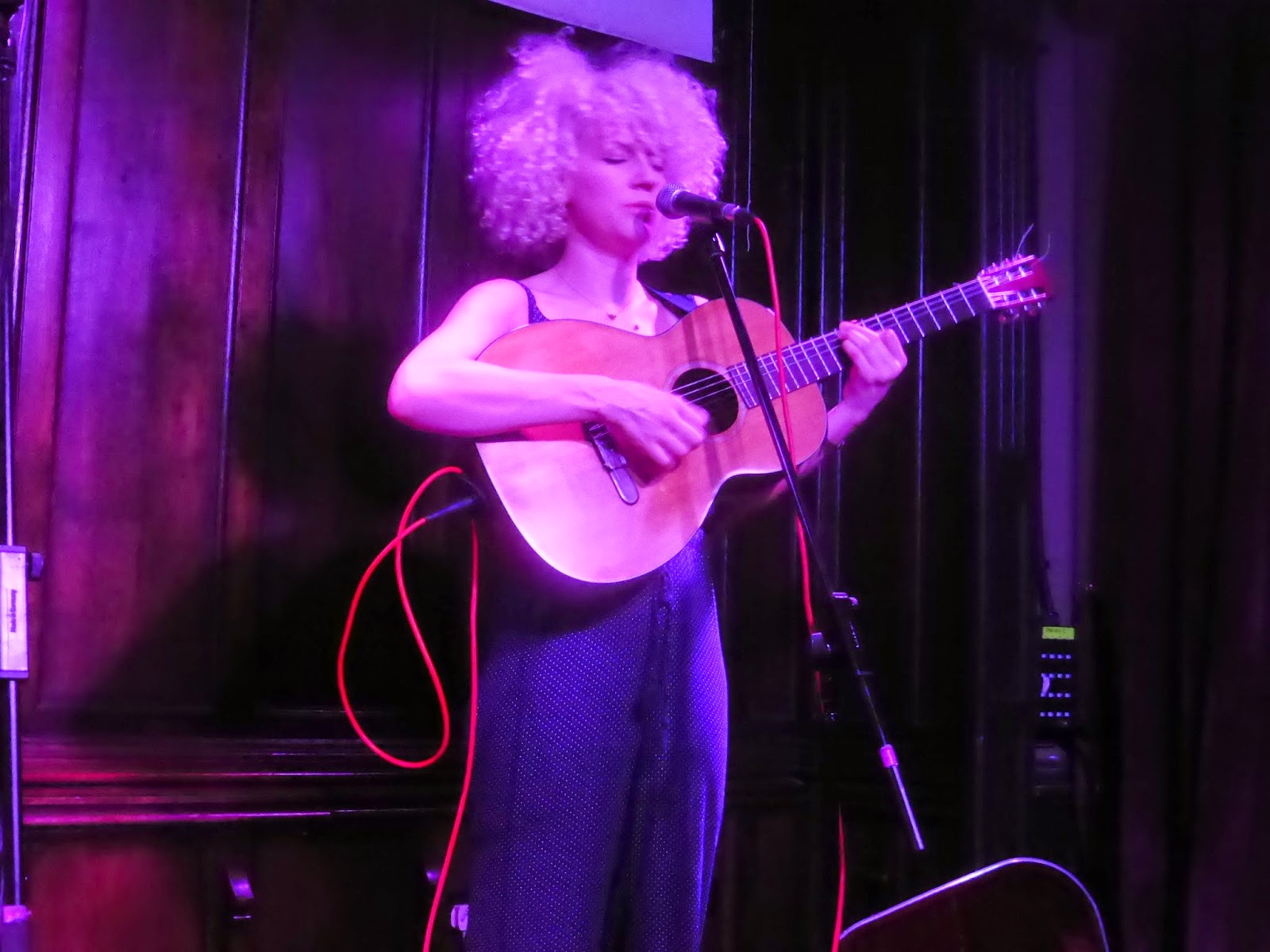 Next up is Fiona Bevan, who recently released her debut album Talk To Strangers and also co-wrote One Direction's huge worldwide hit Little Things.  I have to confess to never hearing that song, but already had a couple of her EPs from 2012 from when she supported Jesca Hoop in London.

She starts with the opening track of Talk To Strangers, Rebel Without A Cause, a song about the 2012 riots which transformed into a love song and plays a set of songs from that album. The first thing that hits you is Fiona's voice, which has incredible range which moves from high notes to softer stylings in the same line, soulful with hints of funk and pop in the same section and all supported by just an acoustic guitar which follows those peaks and troughs in the pace of the songs. This is all testament to the depth of her songwriting which should serve as an inspiration to those who attending the workshops before each of these gigs.  Her recent single The Machine is a great starting point for anyone wanting to discover her, it works as perfectly here in acoustic form, with Kal performing backing vocals, as it does in its recorded form.

Between each song, she takes the time to explain what the song is about, which is always important when it's just one person armed with a guitar.  She writes about love, heartbreak, relationship issues, insomnia, being stuck in the daily grind - real life things that impact everyone. Unlike so many singer songwriters that just stand there looking either too cool for school or just damn uncomfortable, it's impossible not to warm to her genuine infectious excitement at being up there playing her songs.  She engages with her audience too, a perfect masterclass in how singer-songwriters should be and a real inspiration.

Fiona played Rebel Without A Cause, Forwards, Us And The Darkness, Dial D For Denial, Pirates And Diamonds, The Machine and Talk To Strangers 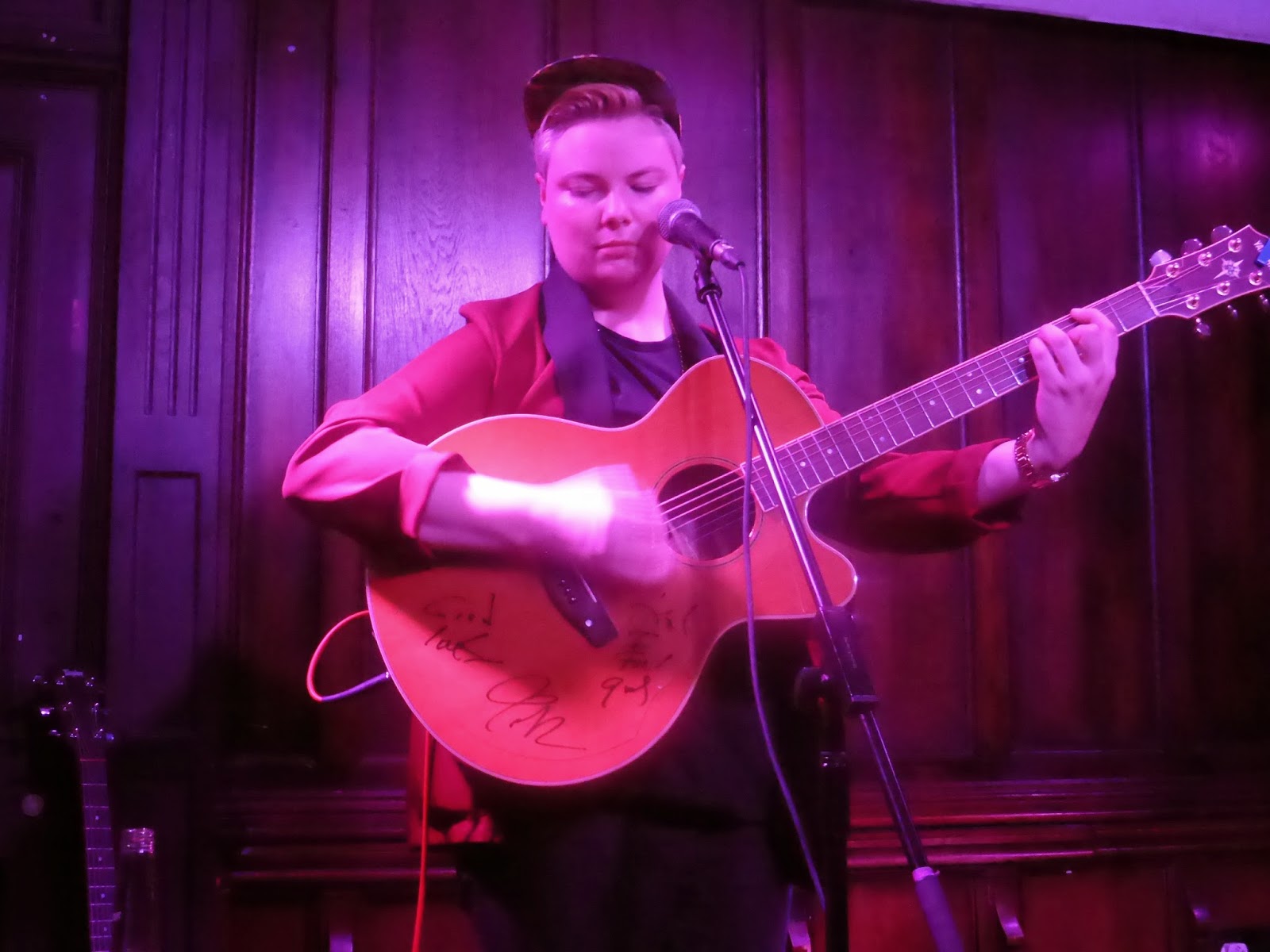 Kal Lavelle has a very different style entirely to Fiona and Little Rach, but the contrast demonstrates the breadth of what can be achieved with a voice and acoustic guitar. She tells tales of a lonely youth back in her native Ireland on Blue Lagoon, that awkward situation we've all found ourselves in at some point on 2013's Fell In Love With My Friend and how suicide is something that often becomes a taboo subject not talked about in Closer.  There's a beautiful fragility and vulnerability in those songs, which are in contrast to her confident outgoing on-stage persona.

She introduces songs from her forthcoming debut album.  Since her 2011 EP Shivers announced her on the scene, it's been a long time coming as she's played live supporting the likes of James Brown and she tells us about a show she played in Bethlehem before the recent troubles kicked off., but on tonight's evidence she has a collection of songs now that will make people sit up and take notice when it's released next year.

There's a directness, an openness and an honesty to her, but she's also wise enough to know that engaging with an audience is key to keeping them focused.  The chorus of penultimate song Get Out Of My Head becomes a sing-along response to an ex, with comedic references to them liking being watched whilst touching themselves. She steps amongst us to perform Shivers completely unplugged and gets us all singing along on Gypsy Blood and set closer which is a cover of Gnarls Barkley's Crazy.

Kal played Dark Angel, Blue Lagoon, I Fell In Love With My Friend, Gypsy Blood, Closer, Shivers, Get Out Of My Head and Crazy.

Song Sisters is a concept that deserves all our support.  There aren't enough young women getting into the music business as evidenced by that stark 13% of PRS artists being female.  There's a lot of talk and bluster about the reasons behind this, but Kal and Fiona are taking real, direct action with this tour rather than sitting behind a desk and writing about it.  Complaining about the misogyny of the industry does little without concrete action to address it and Song Sisters is doing just that.  They're a real inspiration as can be seen from the response they're getting on social media from the people they're aiming to encourage.