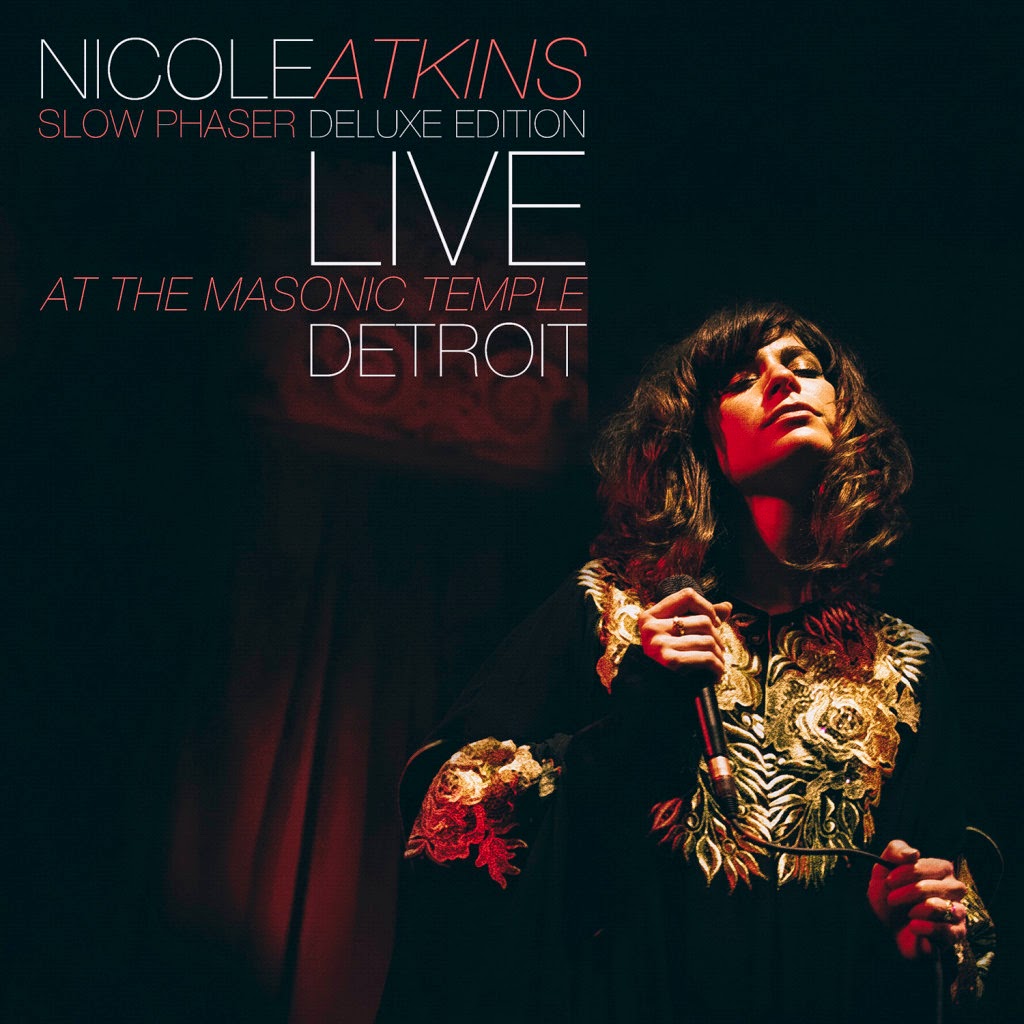 We missed out on reviewing Nicole Atkins' Slow Phaser earlier in the year as it was in some writing downtime. Fortunately we've been given the opportunity to talk about one of our favourite records of the year by the release of a deluxe digital edition.

It's been three years since Nicole's second album Mondo Amore, a record that dealt with the fall out of the break up of a long-term relationship and her split from a major label.   What's immediately evident from the opening shimmering bars of Who Killed The Moonlight is that those demons have to an extent been cast aside and this is going to be a remarkably upbeat record, her most commercial yet, but at the same time defined totally by her personality.  You listen to it and you instantly like Nicole, you want to hang out with her, nail a few shots and chat shit with her till the early hours. And at the end of the record, you're left with the impression that the feeling would be mutual.

The opening half of Slow Phaser fits together perfectly, each song bursting at the seams with dramatic intent from the sensual vocals and dance floor stylings of Who Killed The Moonlight, through It's Only Chemistry and its theatrical sung vocals, spoken commentary and key changes, the bubblegum euphoria of Girl You Look Amazing and the brooding, building electronica of the verses of Cool People giving way to a gorgeous chorus resplendent with melody.  The beauty of this record is the way it gels together despite each song having a vivacious personality of its own, no more so than over these first four songs.

Whilst those four songs are the most commercial offerings on the album, that doesn't mean the quality drops off after that.  There simply isn't a weak or weaker track on the whole record.  Red Ropes feels like a comedown from those opening songs with Nicole in more contemplative mood lyrically as the keyboards that form the basis of the song bubble menacingly just beneath the surface. Gasoline Bride is her yearning journey song, whilst The Worst Hangover sees her calling 911 such is the extent of her dramatic suffering.  Sin Song is a couple of minutes of throwaway fun before album closer Above And Below contrasts everything that's gone before it, providing the one darker, deeper more reflective moment in an album that shines boldly and brightly.

Slow Phaser is an album which has Atkins' personality stamped all over and all through it, an underlying sense of quixotic romanticism and optimism in parts, always striving to sound big and bold.  Despite only using four instruments on the whole record, it feels like a much more complex record than that, full of big ideas, pretty much all of which hit their target.

It's not restricted by that choice of instruments either - one of the album's strengths is the sheer diversity of it whilst maintaining a strident, self-confident purposefulness.  It's expansive, widescreen in parts, brimming with unspoken sexual tension and adventurously taking her out on to the dance floor in parts. It's exploring new sonic territory for her throughout, both in the music, but also in the way she stretches her voice, using it as a fifth instrument to dictate the pace of the song and to provide a dramatic intervention to change the whole mood of the record.

Slow Phaser is the best record we've heard by a female artist this year.

The Deluxe Edition of the album features eight tracks recorded in Detroit earlier year.  What it immediate demonstrates is that Nicole doesn't just replicate her recorded work live, she adds even more range to her voice when performing to an audience. The musicians create a rougher, harder, scuzzier canvas for her to paint her stories over.

We can't see her, but the live capture allows us to close our eyes and picture the utterly captivating theatrical aspect of her performance perfectly.  There's five tracks from the main album (Who Killed The Moonlight, Gasoline Bride, The Worst Hangover, We Wait Too Long and Red Ropes) as well as War Torn and lead single The Way It Is from her debut and a sole track The Tower from Mondo Amore.  It does lack any of her enrapturing between song chat, but putting that minor quibble to one side, it captures perfectly the, and we keep coming back to this word, drama of the Nicole Atkins live experience.