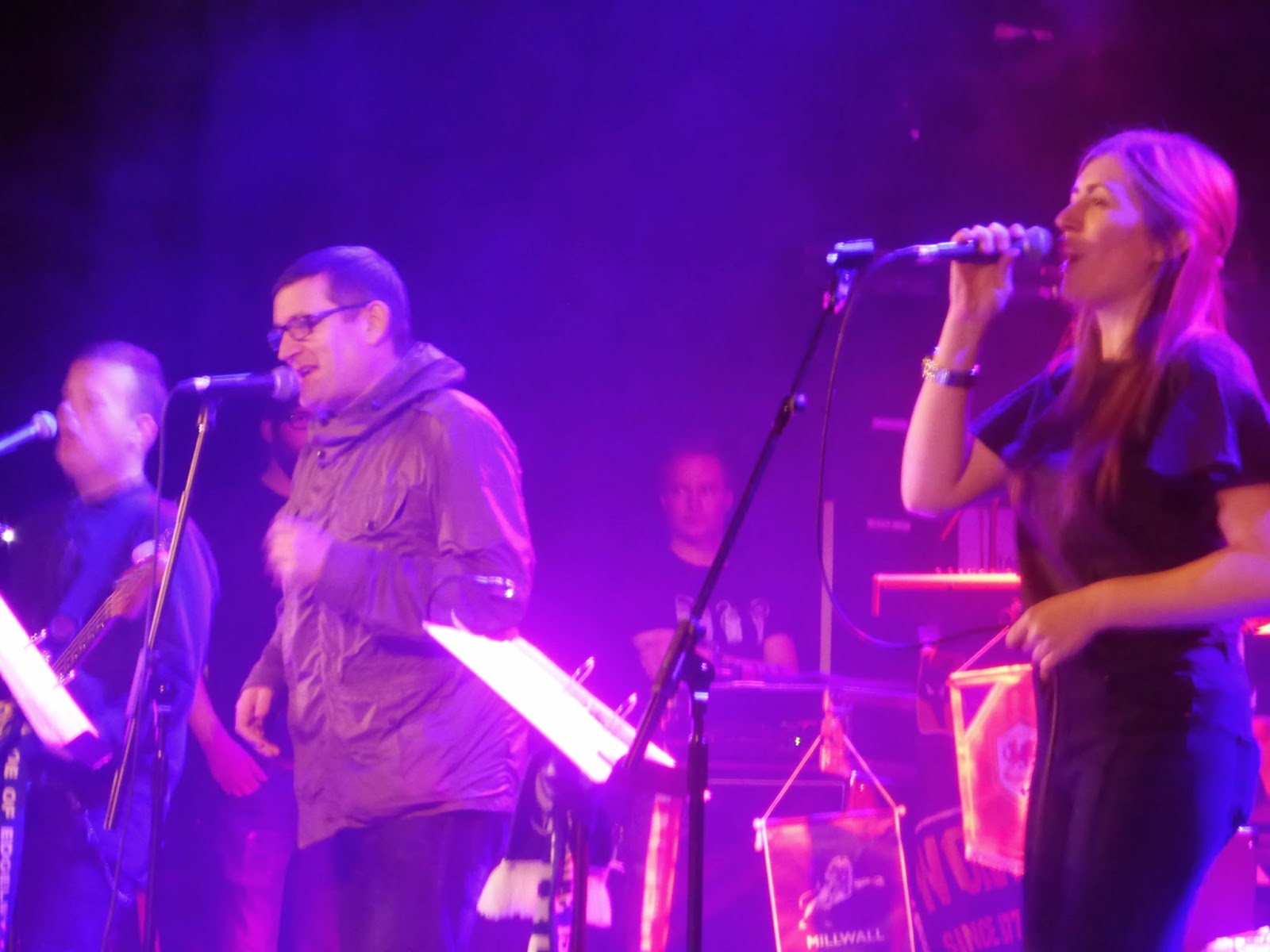 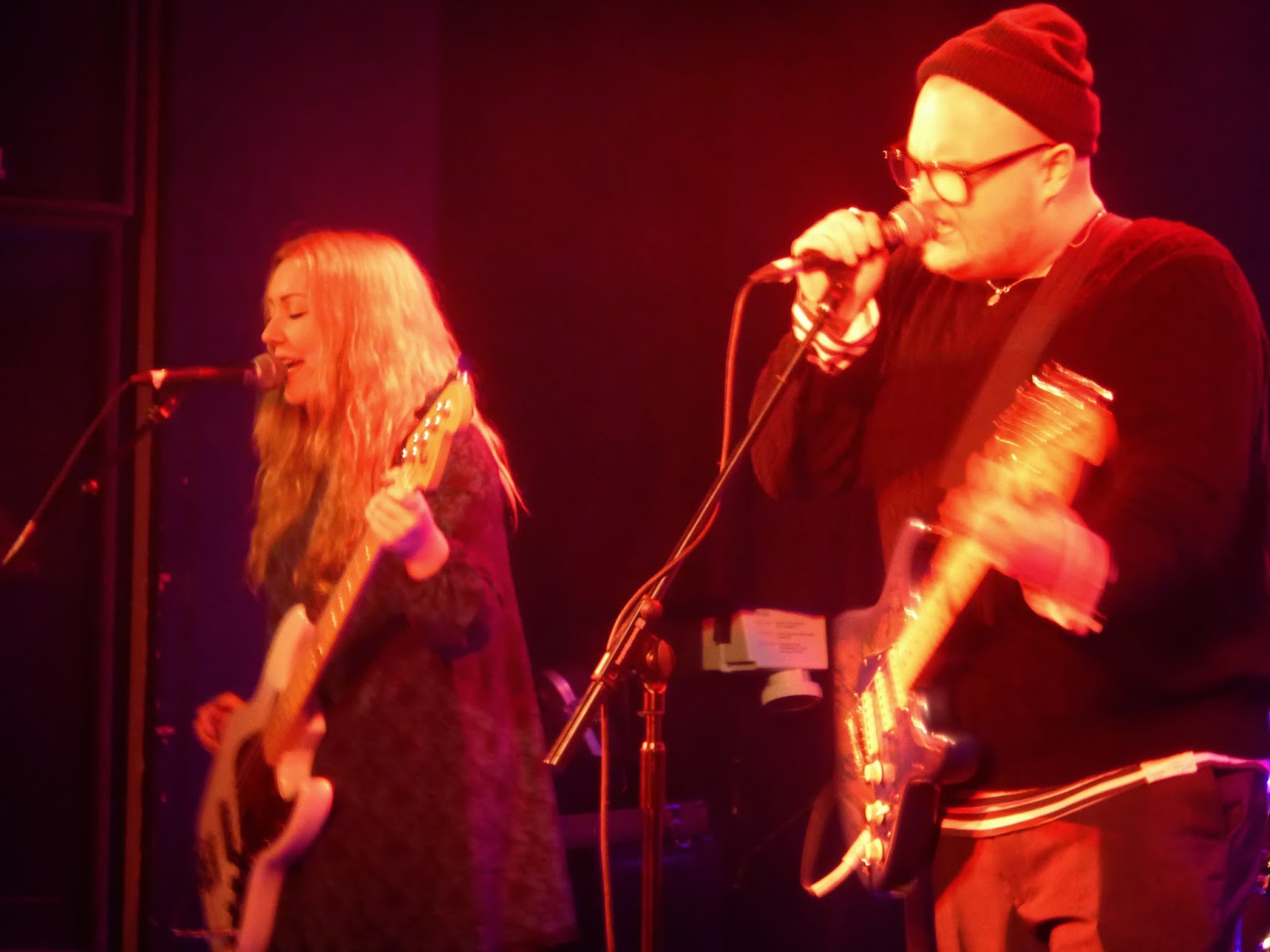 In a career spanning over thirty years, Paul Heaton has been responsible for some of the most easily identifiable songs of that period.  He's currently enjoying a critical renaissance based on this year's album What Have We Become with ex-Beautiful South bandmate Jacqui Abbott. Tonight they round off a successful year and a sold-out UK tour with a Hope Not Hate charity show in the relatively intimate surroundings of Manchester Academy 2.

Before Paul and Jacqui grace the stage, we're treated to an entertaining half hour with The Lottery Winners.  We have a soft spot for them and their infectiously catchy songs, beautifully structured three minute pop gems that burrow their way into your conscience and don't let go.  They're continuing to unveil new material as well which builds on their growing reputation and fan base, and front man Tom charms the audience utterly tonight, having them eating out of the palm of his hand and singing and clapping along to songs they've never heard as if he's hypnotised them. 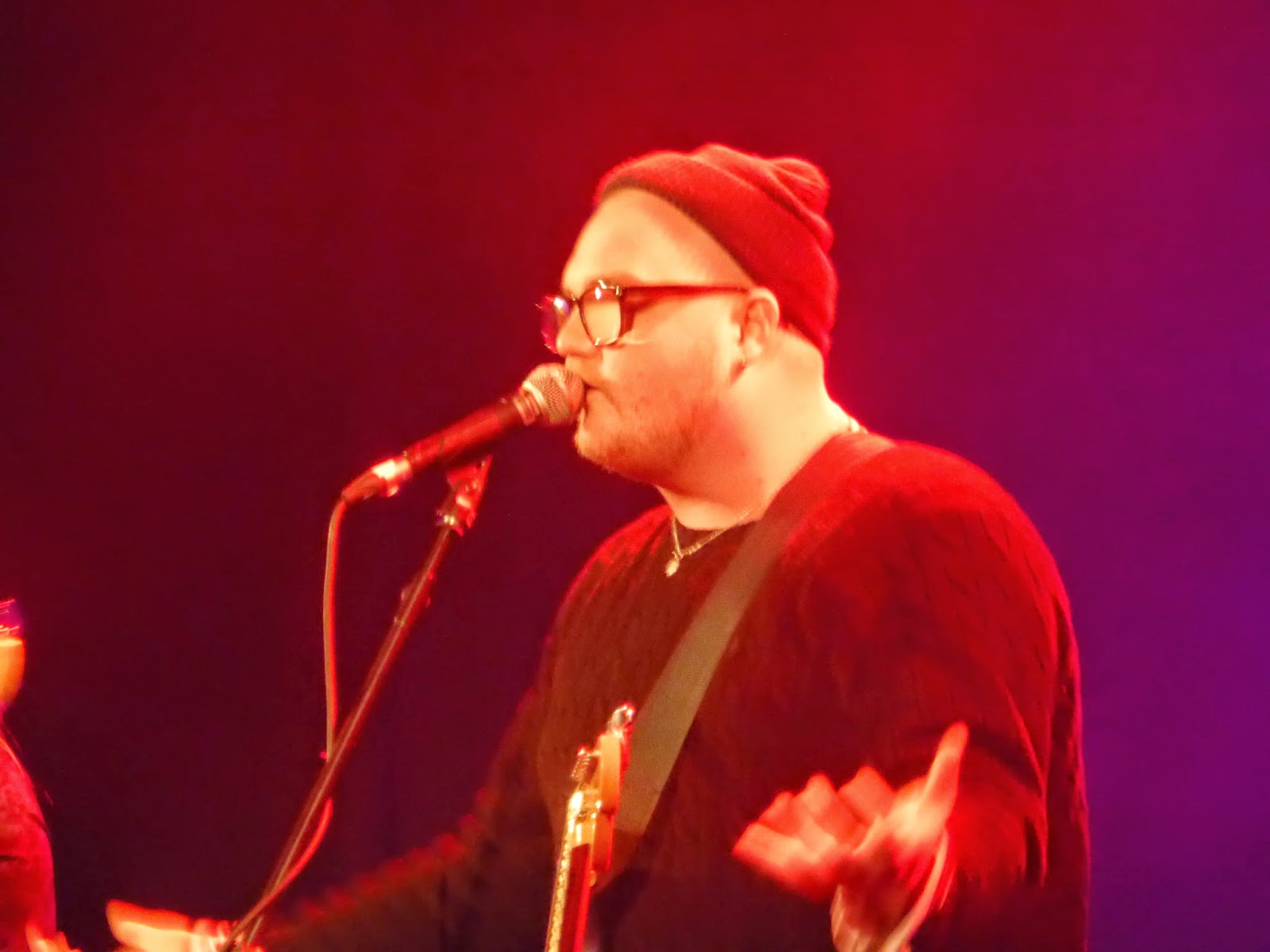 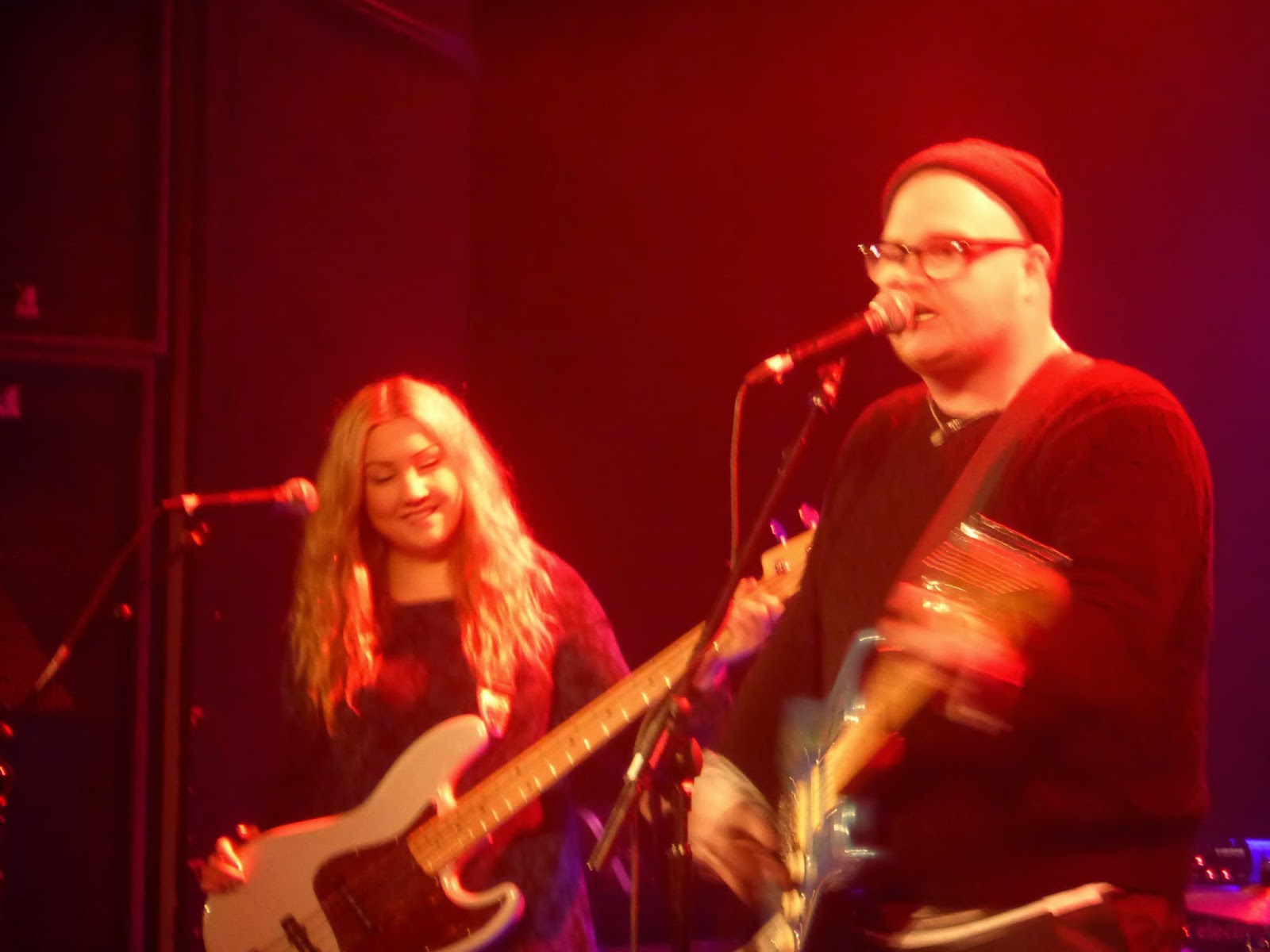 He's a natural showman and he will divide opinion - you verge between rolling in the aisles laughing with him and sometimes wanting to tell him to shut up and get on with it - but it's part of their charm that, along with those songs, makes them a unique proposition in a world where too many bands are trying to be hard to be serious that they forget to entertain a crowd, particularly one that's not theirs. It'd be rude also not to mention the contribution of bassist Katie, guitarist Rob and drummer Joe, who all continue oblivious to their front man, creating these wonderful bursts of perfect pop amongst the chaos. Tom even has the self-effacing modesty to stop penultimate song Flowers, which is an quasi-acapella audience participation song, to joke that's it just a crap Caravan Of Love. It's a harsh assessment. But with songs like Say The Word, Elizabeth and set-closer Pillows they're on to a good thing and from the hints they've dropped on social media 2015 could be a very big year for them. 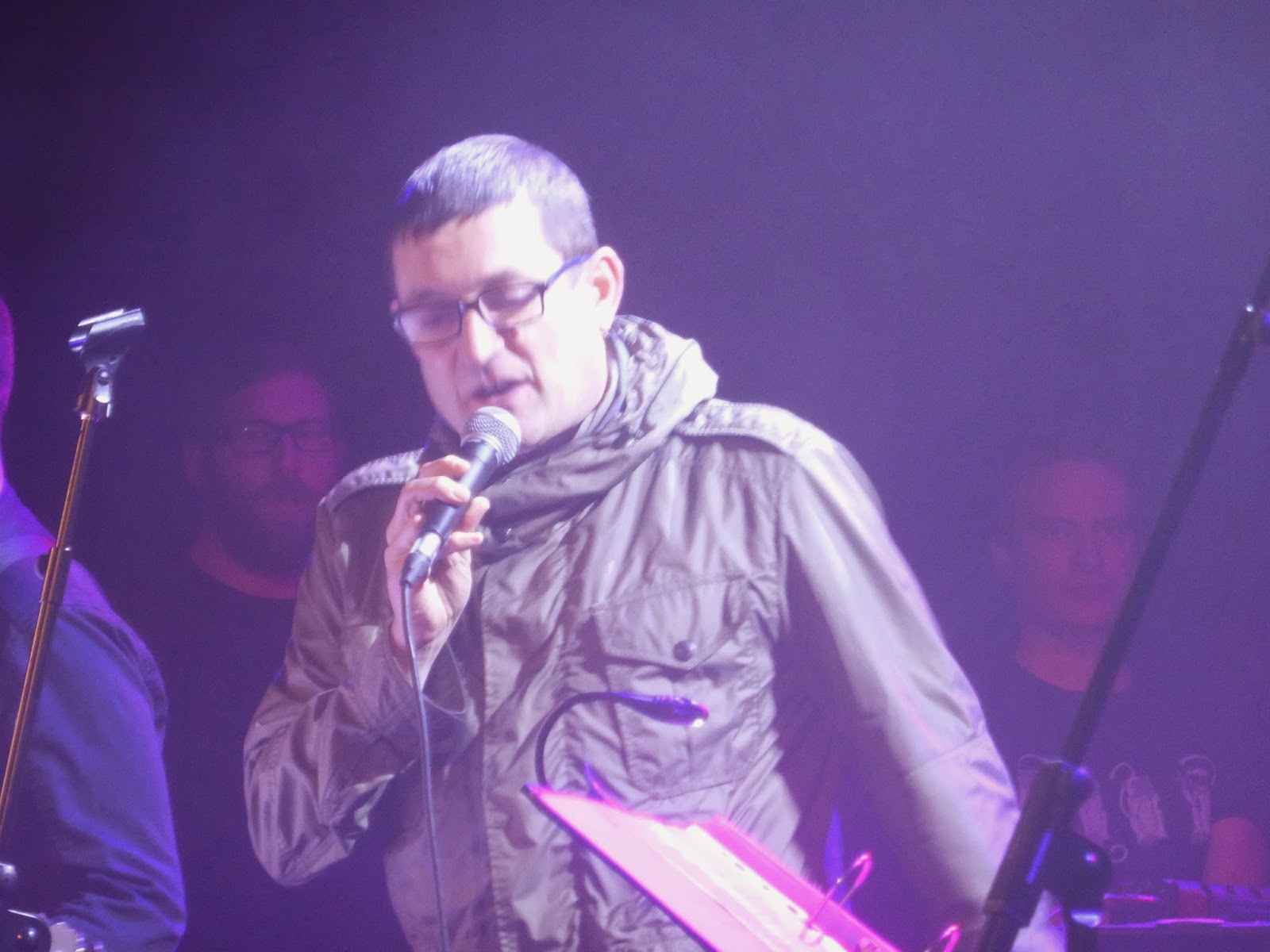 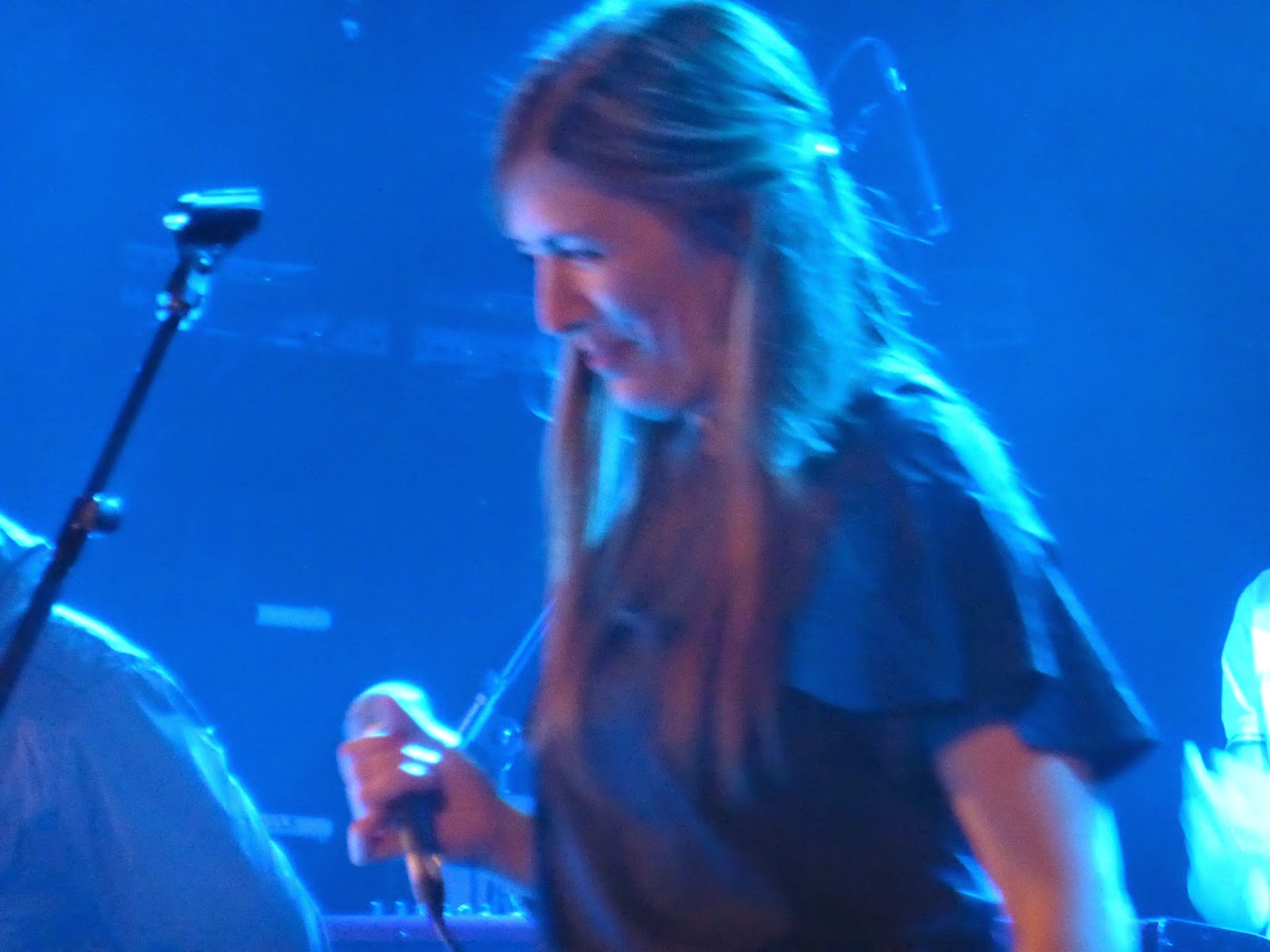 Paul Heaton has had an interesting career, and you suspect he'd hate hearing that word bandied about, from his time in Hull-based alternative troubadours The Housemartins before forming the multi-million selling The Beautiful South and more recently his album with ex-bandmate Jacqui Abbott that has brought him back into the public eye and won a host of new admirers.  He's also remained true to his working class roots, now owning the wonderful Kings Arms pub in Salford, where he discounts prices for union members, supporting the GMB union in their campaign for a living wage including demos at retail outlets in towns they've played on their recent tour and tonight's gig, a far cry venue-wise from their recent sold-out gig at the Apollo and their summer 2015 date at Castlefield Bowl, is for charity with the audience additionally requested to bring along donations for local food banks.  Add to that his principled decision to quit as Sheffield United patron over the Ched Evans affair and plenty of other things he'd modestly just shrug his shoulders at, he isn't your traditional pop/rockstar.

Tonight's set spans those thirty years, drawing from The Housemartins' best known songs, those big hits that made The Beautiful South a household name as well as a significant chunk of this year's wonderful comeback album What Have We Become as well as two new recordings they've recently released post the album. It's that album that has brought them both back firmly into the public eye and also given a new lease of life to the older material as well as developing a whole new fan base. The songs from it tonight stand up against everything else around it, testament to the fact that after a few projects that didn't quite spark as intended, he's definitely, as someone commented post-gig, got his mojo back. 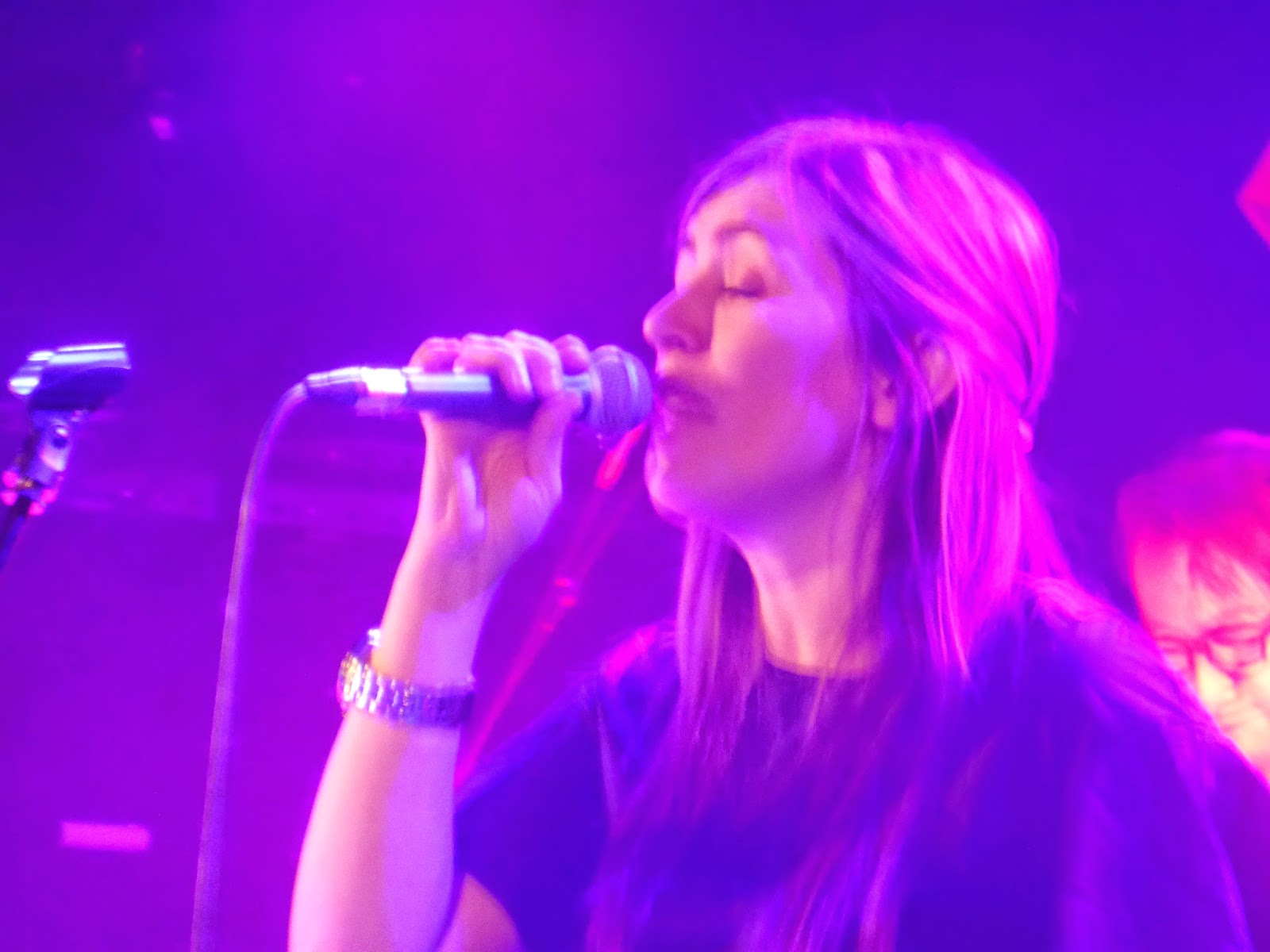 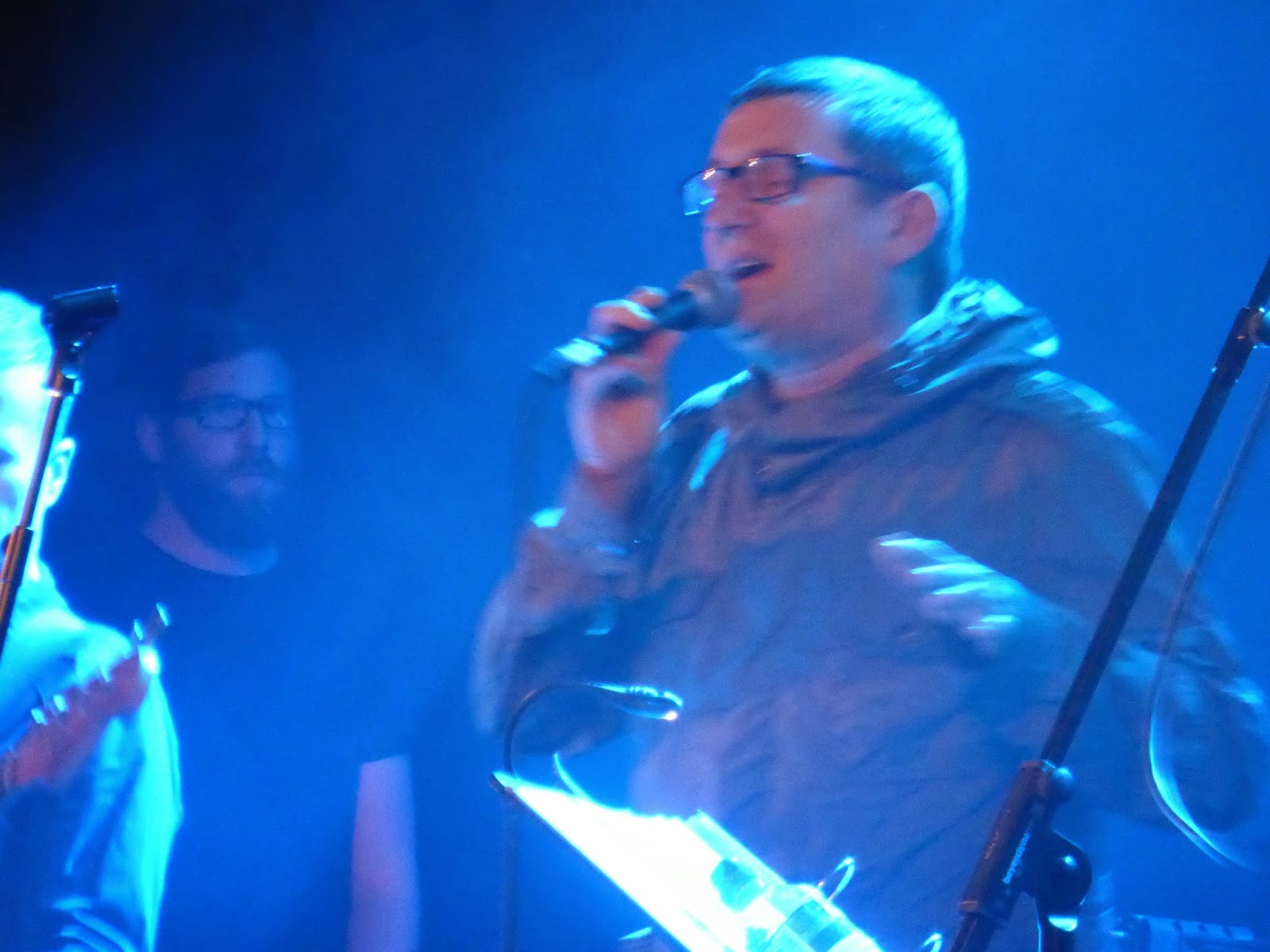 It isn't just about Paul though of course and the principal cause for that mojo returning is stood next to him up on the stage.  He does however provide us with the best analogy of what makes this duo work and why Jacqui is so vital to the success of this record as she was to the continued success of The Beautiful South once she joined.  One of the anecdotes he tells is how he dreamt he was the guy who invented the hole punch and Jacqui walked into a bar as the inventor of the ring binder.  Her voice on its own, when she sings Rotterdam and Everybody's Talkin', makes you wonder why she wasn't a huge star in her own right, particularly as she never stops beaming from ear to ear throughout and the way in which she engages with a child in a wheelchair sat in front of the barrier.  She leaves the talking to Paul though except for when she dedicates a song to her son whose birthday it is today.

The rest of the band provide jazzed up, funked up versions of some songs, particularly The Beautiful South hits Old Red Eyes Is Back and Perfect 10, whilst remaining true to the originals on others, particularly the evocative cover of Everybody's Talkin'. Guitarist Johnny Lexus, Paul's chief songwriting partner on the album, is almost a veteran of the Manchester scene whilst there's bass, violin, melodica, keyboards, drums and brass as well.  The long drawn-out ending to Let Love Speak Up Itself, which closes the main set, is a prime example of how they add to the songs rather than just performing a role of session musician.

What's telling tonight is that that someone completely new to Paul's work would not necessarily be able to place the songs in a time and place, both on the basis of the way the songs have been arranged for the live show as well as the audience reaction. The song selection covers all bases with five songs from What Have We Become plus new song Real Hope, a cutting accurate observation on the X Factor phenomenon and the recently recorded Etta James / Elvis cover Loving Arms, nine of the most recognisable Beautiful South classics as well as six Housemartins favourites.  There's only a couple of very special artists that can lay claim to be able to have done this. 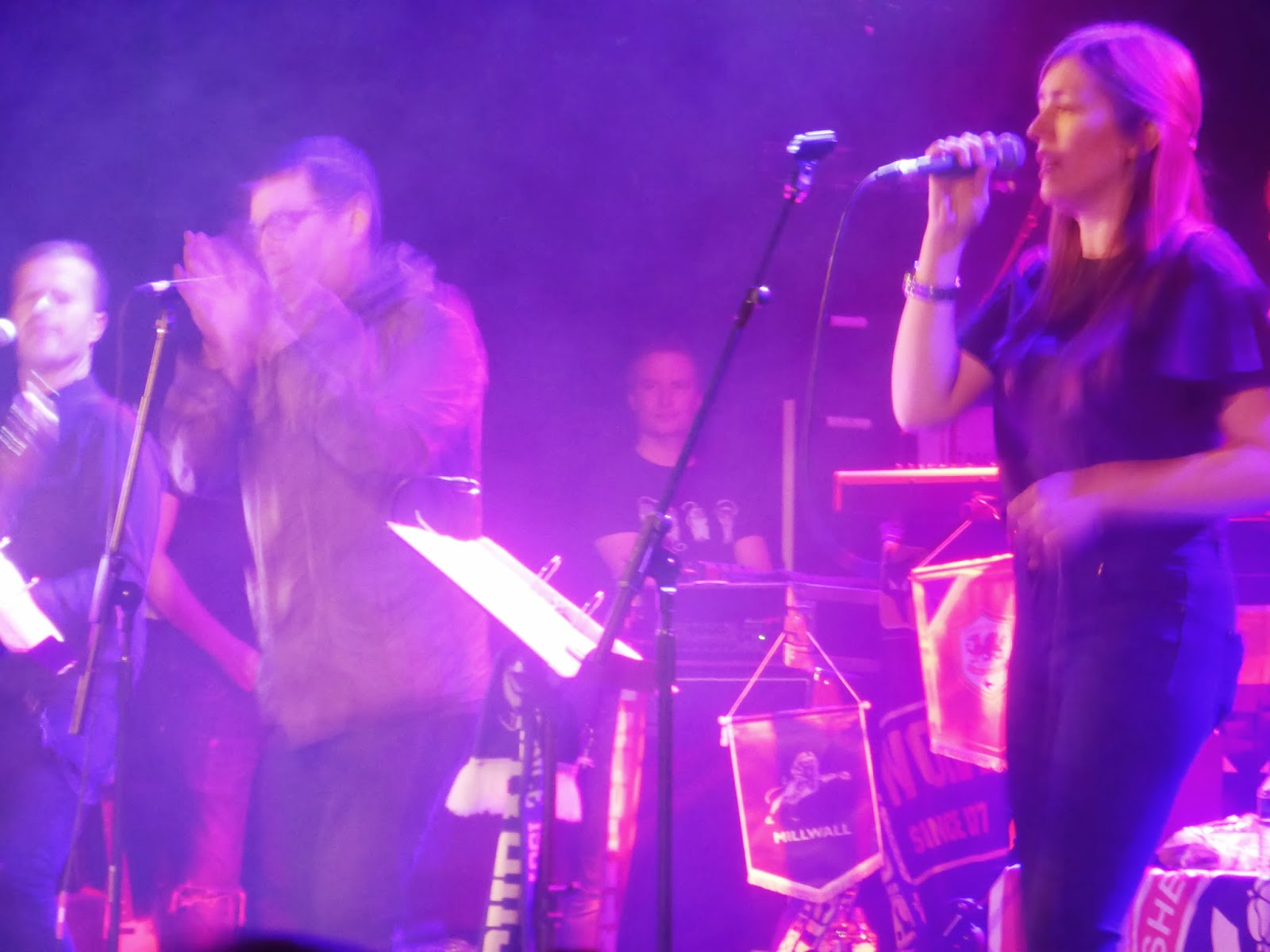 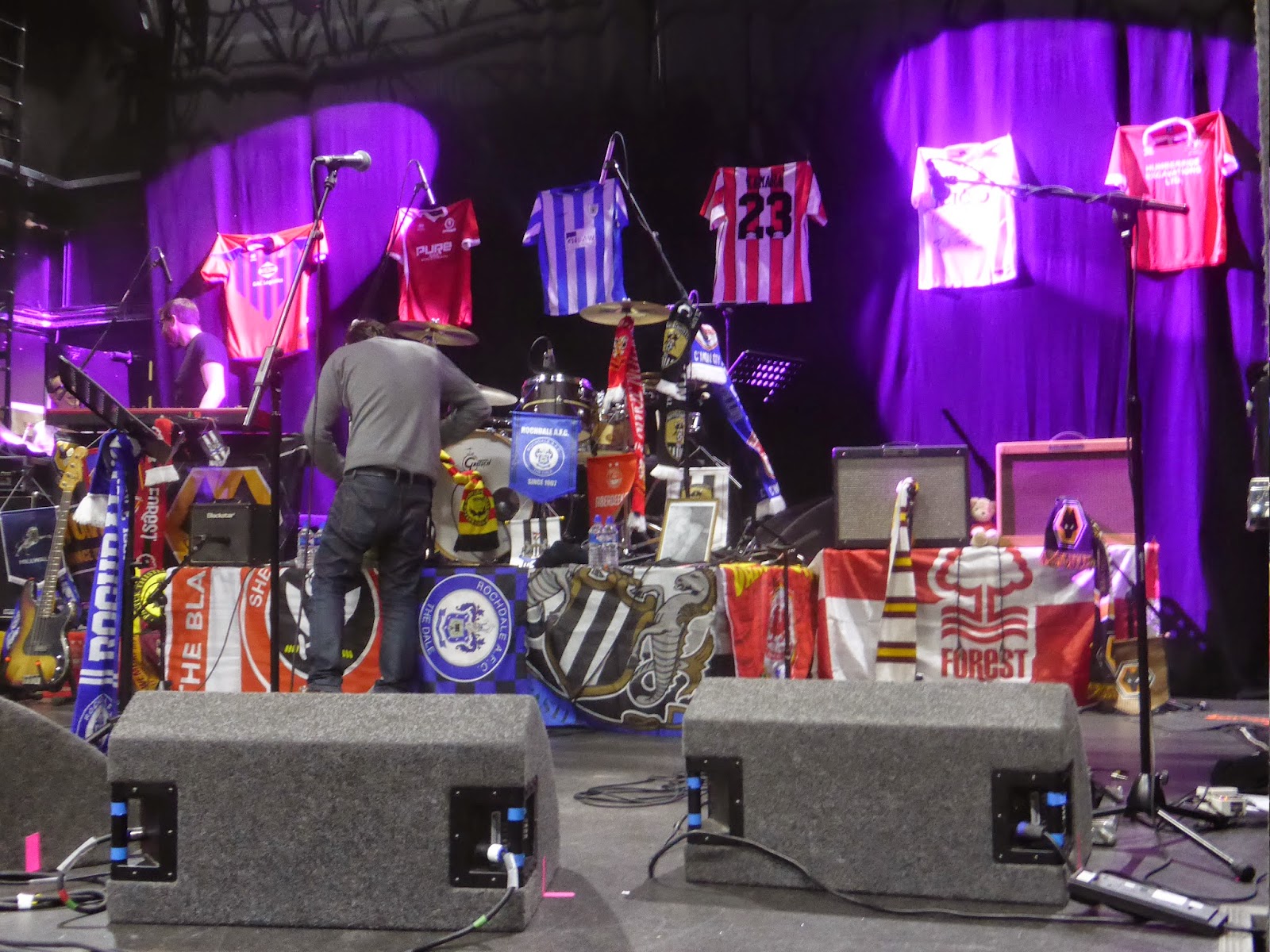 Paul's in-between song stories are hilarious as well. He tells of dreams of being rogered by Gary Glitter, the uproar about the lyrics of Don't Marry Her (Fuck Me) on the album version as Blue Is The Colour was given as Christmas gifts, tells us not to throw food we've brought with us at the stage particularly cans as the band will drink them, advises us not to trust Dana and how Jacqui and he performed on Pointless.  The stage is adorned with football memorabilia and pictures people have drawn of them which he playfully mocks at one point (comparing the picture of Jacqui to as if she'd had plastic surgery by David Blunkett).

It was never cool to like The Beautiful South, The Housemartins were unfairly viewed at the time by music snobs in the same way The Proclaimers are today and the new album, with Paul now in his fifties isn't going to suddenly give him street cred, particularly with some of his dad dancing moves he shakes at points.  No one in the room cares though if this is a guilty pleasure and if it's embracing middle-age gracefully - it's three decades of some of the most articulate, crafted, endearing pop music you'll come across as well as relevant new music and the band bring it right up to date.

They played Moulding Of A Fool, The Right In Me, We're Not Deep, One Last Love Song, Costa Del Sombre, Sheep, Prettiest Eyes, What Have We Become, Build, Loving Arms, Everybody's Talkin', Real Hope, Old Red Eyes, Good As Gold (Stupid As Mud), DIY, Don't Marry Her, Me And The Farmer, Let Love Speak Up Itself, Rotterdam, Happy Hour, Perfect 10 and Caravan Of Love.