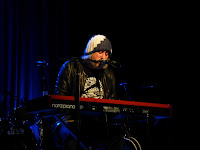 It's fifteen long years since Badly Drawn Boy (Damon Gough) won the Mercury Music Prize with his debut album The Hour Of Bewilderbeast. After a couple of years off the scene, he's returned to play it in full ahead of a new album later in the year. We caught up with him at an emotional homecoming Manchester show that acted not just as a celebration of the album, but also as a form of personal catharsis.

There's been quite a bit written about the circumstances around the album which is written in the main about Damon's long-term partner and mother to his two children whom he's no longer with. Always a man to wear his heart on his sleeve at any time it's a brave thing to do to lay himself so bare in front of several thousand strangers as he does throughout, but in particular at the start of the second half of the show. When he stops and walks off a couple of minutes into the opening track The Shining, we fear the moment might overwhelm him. But his team quickly reassure him and he comes back out and as the evening progresses you can almost feel the healing effect the reaction he gets is having on him. He constantly thanks the crowd for their support and love and when it's usually a sign of meaningless platitude, he genuinely means every word of it and there's probably plenty a quiet tear shed around the hall as well as up on stage. He's a man who needs love and the Bridgewater Hall is bursting at the seams with it.

Once we're past the false start, Damon takes us on a journey through The Hour Of Bewilderbeast, reminding us how different the album was from anything else around at the time. Whilst it had the chart-friendly singles that made him his name, the record itself was more than the sum of its parts. There's short, simple pieces, some instrumental that tie the record together which could mean that playing it live doesn't work - but the middle section of Cause A Rockslide where there's samples and unusual instrumentation it does perfectly, helped by Damon explaining the context of it. Having an audience sat down does help keep their attention throughout most of it, but the attention to detail that he and the band have put into recreating the album is captivating whether it's the moments that are most familiar to the crowd or the bits in between. It's a concept album in a way that albums are no longer made - telling a story, taking the listener on a journey - rather than cramming a few radio hits at the start and filling the rest up with songs that the die-hards will cling to and in that sense it's perfect for this much maligned format of show. 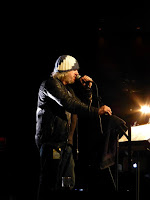 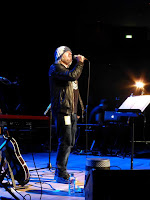 You can feel Damon growing in confidence as the set progresses, as each song is rapturously received. He dedicates Magic In The Air to the departed friend of some people he met outside, he humours a heckler from the balcony who's persistent in shouting at him before calling him a "daft twat" as you would a good friend and twice he makes his way down to the front to shake the hands of anyone and everyone down there. He continues to tell us how much tonight means to him throughout, particularly as it's Manchester and standing on this stage reminds him of better times.

The second half of the set is a resume of his career post Bewilderbeast and confirmation, if it were ever required, that he's more than a one-hit wonder. He starts with a series of songs on his own, as he's played so many of his infrequent recent shows. A Minor Incident, dedicated to his ex and his two children, is particularly poignant given he dedicates it to his ex and his two children as is fellow About A Boy soundtrack song Above You Below Me which follows it.

In Safe Hands from his 2010 album It's What I'm Thinking Part One also demonstrates that despite, his profile dropping commercially, he still produced achingly beautiful, raw and emotional music that's incredibly personal to him and which, as a result, others can relate to and seek solace in. It's testament to the love in the room that most of those that don't know this later material sit and listen to it and appreciate it.

The band come back on and are introduced with a heartfelt round of thanks for making this the most enjoyable tour of his life - given he's a renowned hater of life of the road it's refreshing to hear that he's found enjoyment in it again. With the guitars turned up they jump around the rest of the better known parts of Damon's back catalogue from About A Boy, All Possibilities, the marriage proposal in song You Were Right (in which he throws in a reference to the night Frank Sidebottom died in recognition of the recently departed Chris Sievey), the painful heartache of I Saw You Walk Away and the social and political commentary of Born In The UK.

He concludes the show with an elongated run through Silent Sigh, possibly his best known song, and to watch the joyful interaction with the rest of the band as they bring the song to its end, three of them up on the drum riser and jumping off together, would melt even the hardest heart. There's so much written about music being a healer, something to break someone out of a rut and we're witnessing it in front of us. It's still uncomfortable at points, but the sheer scale of the response from the crowd is overwhelming. Manchester (and the wider North West) looks after their own and Damon is one of us.

There's still time for him to sing the song that turned him onto music at fourteen. The band leave the stage and he sings Springsteen's Thunder Road with the aid of an instrumental backing track as if he were that child in their teenage years singing it into a hairbrush in front of a mirror. It's the final act of an exorcism of demons, a burst of uplifting optimism and a flashback through the years to the innocence of teenage years when nothing mattered.

Whilst the focus tonight is on his debut, the second half reminds us that he's consistently been one of the most intelligent and articulate songwriters of his generation despite the plaguing self-doubt about his work at points. Tonight's reception should hopefully assuage some of those as he starts the road back into putting out new music, because there will be always be a very big place in the hearts and in the record collections of many people, in Manchester and further afield, for Badly Drawn Boy and that ubiquitous woollen hat.