Control Of The Going - Manchester The Yard - 9th August 2015 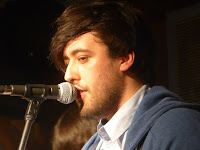 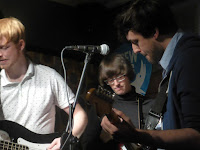 For a band only playing their second gig tonight Control Of The Going have got a bit of a buzz building around them, already having secured a support slot with local heroes Purple Heart Parade and an Academy 3 show in October. They're already onto their second release as well - the single Wild Flower following quickly on the heels of debut EP Epilepsy Bus Ride. We went along to The Yard to watch them overcome technical problems to impress again.

Preceded by an act with just a keyboard, the band's first challenge is to set up without the aid of a soundman and with limited space to fit all six of them on the stage. With Ashley hiding behind Tom and Liam they just about manage it and start the set with Open Your Eyes. It's almost a public soundcheck as it sounds great in its component parts but the mix isn't right. They do a bit of shuffling around and fix most of the issues.

This set is quarter of an hour longer than their recent debut so there's more new material added in that we haven't heard before. The new single Wild Flower is debuted towards the end and they capture the thrilling essence of the song as the multiple guitars collide and bounce off each other as the introduction grows in intensity before Liam's first vocal comes in. The other two new songs Reflection and Step Back demonstrate that they're a band still developing before us. The latter sees them experimenting more with their sound, a more direct forceful style and Liam and Tom sharing vocal duties.

The Message, our favourite song of theirs so far, has immense potential to be stretched beyond its three minutes into something more expansive and mind-blowing and they know it, but for now, it's there as a taster and a teaser of what's to come. It'll ultimately replace Don't Let The Sun Go Down as a set-closer when they inevitably revisit it, but for now that's a fitting end to their show, dark, brooding, chiming guitars, keyboards popping up then dropping back down and a rhythm section driving it along at just the perfect pace. 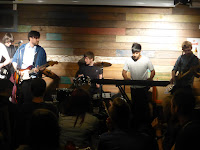 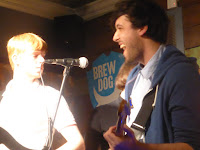 Tonight's a test for them. The venue's only really set up for solo artists and the lack of sound man and time to set up properly poses them a challenge they won't have faced before, but it's one they deal with in their stride.

We'll leave the last word to the group of blokes sat at the back of the pub coming to the end of their Sunday drinking session who think they remind them of Joy Division in parts but who stop their conversations to listen and at the end of the song ask us why they're playing in a pub rather than bigger venues.  That'll come with time.