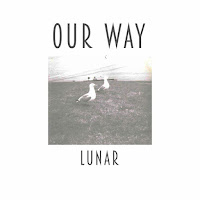 Our Way is the debut single by Manchester four-piece Lunar. Sam, Christie, Luke and Max may only have played two gigs so far, but their name is starting to create a buzz around town. The single is officially launched at Sound Control on 22 August, but we're proud to give it an exclusive first play as this week's tip on Shell Zenner's Amazing Radio show. We spoke to front man Sam Carson to find out more about the band.

Could you introduce the band to us please?

We're a band from Manchester, made up of Sam Carson on vocals and rhythm guitar, Christie O'Connell on bass and backing vocals, Luke Bonell on lead guitar and Max Pilling on drums.

How did you get together - have any of you been in bands previously?

I was in a band called The Shambles before Lunar for about a year, playing a few gigs and it kind of faded in to nothing and I wanted to start gigging again which was why we started this band. Christie used to sing in a band called Off Piste with other lads from school and Luke used to play lead in a band.

I've known Christie and Max since high school and I met Luke in college through having the same music taste and same mates. We started the idea of a band when Luke, Christie and I were hammered at a Peace gig earlier this year in Manchester and we talked a lot of shit that night, but that's basically how it all started. After we got Max on board we started flying through songs and practicing as much as we could.

Tell us a little bit about the single Our Way - what's it about and what inspired you to write it?

The single took about twenty minutes to write and about two solid days to record, which was a killer. It's a song about people who hate how their life has turned out, or don't like the position they've found themselves in and when people try to interfere with things that have nothing to do with them. I was in some shit with my girlfriend when I wrote this, when I am not, and it's basically saying yeah it's pretty bad at the minute and everyone is talking out their arse, but it's only a matter of time until it sorts itself out.

How does the band write songs and work on them?

At the minute it's just been the songs I've wrote which I've brought to the band and we've worked through them. Most of the time I'll bring a song to the band and it'll totally change and it turns in to something bigger and better.

Intro was an idea that Luke brought to the band and we developed that into what it is. That'll probably all change after Sound Control because we've got more time to sit back and write songs at a steady pace.

When we practise Luke is always playing random shit on his guitar and it sounds mint, and I'll say some thing like "fucking hell what was that" and he'll have no clue. Yeah, we've got loads of stuff in the pipeline... 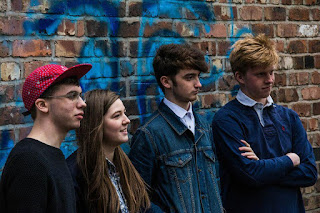 You've got a fairly distinctive sound on the single and some of the other tracks we've heard.  Who would you say your influences are?

The sound is mostly due to the producer, and we can't thank him enough. He helped us loads when we were recording Our Way. I'm massive into The Courteeners, The Stone Roses and The Strokes, where as Luke is into Nirvana and Oasis. Christie is into more indie stuff like Peace and Dog Is Dead and Max is into near enough anything you can think of.

One thing we can all agree on is an undying love for The Smiths though. We don't really know what we sound like really, we've been told we sound quite punky live but we don't see ourselves as a punk band, and the single (we think) is quite poppy. So a massive mix of bands.

You've only played a handful of gigs so far and you're headlining Sound Control for your launch. What can we expect on the night?

Yeah I can count the number of gigs we've done on one hand so far, but that doesn't mean you'll be able to tell that when you see us. If you've been to any of our other gigs, then you kind of know what to expect, although we've got a few surprises ready to keep you on your toes. Hopefully it'll be quite rowdy in there because we're attracting a decent sized crowd so if you're planning on coming get your tickets quick!

We've got some great support bands on; Ryan Jarvis, Church Party and Tourist Attractions who are all definitely worth getting down to see too. There's been a lot of buzz about the single so far, so we're hoping that'll extend into the gig and it'll be a top night!

What are your plans after the release of Our Way and the launch gig?

After the release of Our Way and the gig we're going to keep writing. Hopefully the momentum from the gig and the buzz from it will keep us moving, I've got a load of songs ready and I know others in the band do too.

We've been offered a few gigs supporting some amazing people who are established bands which will be great for a relatively new band like us, but we can't say too much more than that at the minute but you'll find out soon enough. We're going to gig as much as we can for as long as we can, and just see what happens.

If you had one sentence to describe the band, how would you do it?