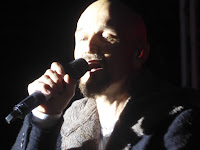 James headlined the first night of Edinburgh's Magners Nights festival on the Ross Bandstand in Princes Street Gardens. In front of a boisterous crowd, James played a set mixed with some of their biggest hits, tracks from last year's La Petite Mort album and a few less well-known tracks from their back catalogue.

With the most picturesque of backdrops, Edinburgh Castle, in the background, James started their set with Walk Like You, the seven-minute opening track from La Petite Mort. As with previous gigs, it's been refreshing to see how the album appears to have been well-received and people know the songs when they're played rather than just wanting the greatest hits. The song itself is a great introduction to the set and allows the band room to breathe and experiment, Saul changing instruments mid-song to add some gorgeous violin. She's A Star and Just Like Fred Astaire follow and Tim comes down to the barrier, joking that he wasn't going to go crowd surfing as the last time he did in Glasgow resembled the South Park episode where Cartman got an anal probe. 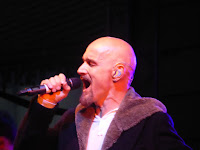 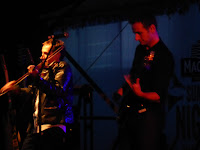 Gone Baby Gone is fresh and loose, the one point where Larry's absence is at its most noticeable as the jagged guitar riff that runs through the song is replaced by something a little softer. Johnny Yen might be over thirty years old now but it's as bold and poignant tonight as it's ever been, a song that's been through several transformations over the years but is still loved as evidenced by the reception it gets at the end.

Say Something and Laid build the crowd into a frenzy. The former is one of James' most straight-forward songs but one of the most loved and tonight five-thousand alcohol-fuelled Scots sing back every word. They then go a little bit bonkers as the unmistakable intro to Laid kicks in. As a song usually held back for the finale it's unusual to hear it mid-set, but no one minds too much as they're too busy dancing or bouncing around.

The strange set-up of the stage means that the band are a bit hemmed in so Tim is constantly prowling round charging the others up, encouraging them on to improvise and to inspire each other. Adrian puts his own mark on a frantic, frenetic Jam J, all stop-start aural pyrotechnics, before they sooth us with a quiet but emotionally fierce PS and Out To Get You, which again demonstrates Saul's reluctant mastery of the violin and being able to use it to steal the show. 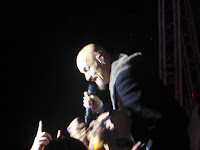 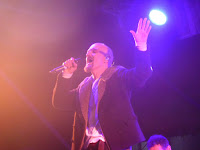 Curse Curse has become a huge James anthem in the tradition of many of their huge hits. It's got all those key criteria, you can dance along to it, sing and chant along and yet it's wrapped up in a packaging that's very different to anything they've done before it. Last time James played in Scotland there was a furore involving the leader of the Scottish Conservatives because they hadn't played Sit Down on the night, but this year it's back in the set to remind us all what a singular piece of music it is, a call for unity and togetherness that's perfect for drunken nights like this.  They finish the main set with Sound and tonight it feels like it's on the edge of breakdown as they improvise and take the song off on tangents that never quite come back to the same point. As the stage fills up with people pulled from the audience, no one minds.

The encore starts with Moving On and a dedication to a young fan that recently passed before the calling card introduction to Come Home sends the crowd into delirium and some frankly atrocious attempts at recreating the 1990s around where we're stood. They finish, just as the fireworks from the tattoo at the castle on the hill start, with a poignant eerie Top Of The World, a last minute call instead of the more obvious upbeat Sometimes. It's a brave move to finish the set on such a song, but also feels completely appropriate as the sky behind the stage is lit up.

James played Walk Like You, She's A Star, Just Like Fred Astaire, Gone Baby Gone, Johnny Yen, Say Something, Laid, Jam J, PS, Out To Get You, Curse Curse, Sit Down, Sound, Moving On, Come Home and Top Of The World