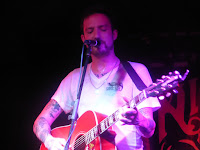 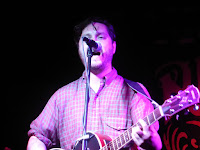 To celebrate the release of his new album Positive Songs For Negative People, Frank Turner is playing a series of solo shows in small venues. The Night And Day is fuller and warmer than we’ve ever seen it as he takes to the stage and treats a captivated audience to twenty-two songs over the course of half an hour. Support came from an excellent set by label mate PJ Bond.

PJ is a perfect support for tonight. Like Frank, his songs are either autobiographical or about situations he’s experienced or observed and they’re taken from his recent album Where Were You and his split album with his sibling Brothers Bones Baby Bones. With most of the audience probably unaware of his work before he takes to the stage he has a lot to do to silence the inevitable chatter and buzz of anticipation for the headliner, but from opener Everglades, which appears to be about offering to take out an adversary of the song’s subject, he makes a great fist of it. 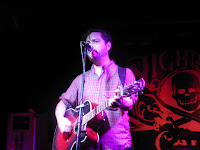 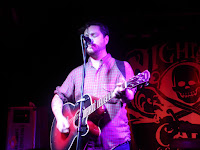 Songs like Broad Street, which is about Philadelphia, I’m In A Bad Way, Savannah and Darling I’ve Been Drinking Nights make a connection with the audience here because they deal with real life situations that people can relate to. And combined with PJ’s delivery, serious about the subject matter but also self-effacing and laced with a wicked sense of humour such a joking about not being invited to the party that was going on in the venue’s toilets, his set is an absolute triumph. In a world where artists often offer meaningless cliché and platitude, you can sense his absolute pride and joy in what he’s doing and being in this room. Of course it needs to be backed up with songs and PJ has those in spades.

By the time Frank takes to the stage we’re in positively sauna-like conditions, but no one really cares such is the devotion of what’s become known as The Frank Turner Army.  The set mixes eight songs from Positive Songs with thirteen from across his back catalogue concluding with a cover of Queen’s Somebody To Love – which by anyone’s standards is a pretty brave move. He includes songs that people have requested recently in there too rather than stick to the same set in the same order each night, a sign of the connection he’s kept with his audience from the days he was playing this room to three men and their dog. As a result the set is laden with fan favourites, oft-requested songs such as Balthazar, Impresario and Wisdom Teeth as well as a scattering of those big arena anthems.

The songs that he plays, whether new or old, generate communal singalongs almost throughout as he rollercoasters his way through twenty two songs in an hour and a half.  They are songs that very cleverly say anything the listener takes from them to everyone, yet mean could mean everything to anyone such is Turner’s innate ability to craft words that feel both generic and yet can be taken very specifically at the same time – take the start of The Ballad Of Me And My Friends where he declares, in unison with 250 raised voices, that “everybody thinks that they’ve got a plan.” When the crowd holler words back to him, it’s because he’s made a connection that so few genuinely achieve. 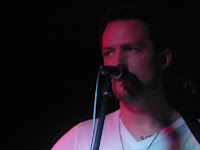 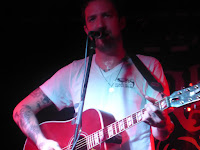 The new songs are rapturously received as well. The likes of Mittens, Silent Key and Love Forty Down, where his voice becomes so rasping you feel his vocal cords might snap in the same way his guitar strings do regularly during the set, are already huge fan favourites that get the same adoring response as the older material. So much great music is crafted to turn around bad times and make people feel good about themselves and look forward and Frank has created an album’s worth of it that hits the spot each and every time.

The singalongs only stop for the beautifully tragic eulogy to his long term friend Josh Burdette who managed the 9.30 Club in Washington until his suicide a few years ago. It’s a song so achingly personal to him, and you can see the wrought emotion in his face as he questions whether he could have done more.

During the set he’s cast glances left during the quieter moments at a group that’s chatting away and, without breaking stride during Balthazar, he asks them if his playing is disturbing their conversation and that thousands would have loved to have been there in their place. It puts them in their place without being rude and for that moment alone, he’s our hero.

Frank’s background and well-spoken manner (bar the persistent swearing) and effervescent enthusiasm often has him decried as not being cool enough, but when he tells us that we should be supporting these venues that form the lifeblood of the music scene, rather than the O2 and such that he can fill these days, you get that he means this. He could quite easily have taken the easy way out and played this gig at somewhere like The Ritz and charged normal gig prices like pretty much every band that’s played an arena do as an “intimate” show, but he chose to play here (and places like The Garage and King Tut’s) and charge a fiver to get in. These are real intimate gigs that many of his peers would only ever play as part of some corporate sponsored event rather than to connect with his devoted fan base.

He remembers where he’s come from and who’s supported him and this is why, despite the venom often directed at him as a punk defector, because of the fact he comes from Winchester rather than Hackney or that he commits the cardinal sin of wanting people to sing along, he’s far more genuine than his peer group. You’d want to go and have a beer with him far more than you would so many of our supposed working class heroes.

Rock n roll is about having a good time, leaving your troubles at the door, losing yourself in the music and words and the people around you not about some chin-stroking experimentation, parochial sense of belonging to a town or city or how many drugs you take. Mr Frank Turner is the very perfect epitome of rock and roll.

Frank Turner played The Angel Islington, Get Better, If Ever I Stray, The Opening Act Of Spring, Reasons Not To Be An Idiot, The Way I Tend To Be, Song For Josh, I Knew Prufrock Before He Got Famous, The Fastest Way Back Home, Silent Key, I Am Disappeared, Love Forty Down, Wisdom Teeth, Mittens, The Ballad Of Me And My Friends, Balthazar Impresario, Photosynthesis, Recovery, The Road, The Next Storm, I Still Believe and Somebody To Love.