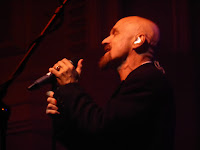 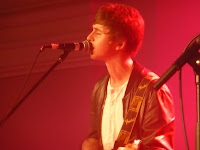 Gigs on the Isle Of Man are a bit of a rarity. Added to the fact that this was James' only indoor full gig of the year as they record their new album in London, it's a new venue to add to our list and this was the place most likely to see new material revealed made this a must-see gig on their summer calendar. Things haven't quite panned out as planned though as guitarist Larry Gott is taking a break for this series of gigs with Adrian Oxaal, who played guitar in the band from 1997 to 2001, manfully stepping into the breach - which make this series of shows interesting for an entirely different reason. Support came from the up-and-coming Sheffield band The Sherlocks.

This is the first time we've seen The Sherlocks. They've played a series of incendiary live shows in their native Sheffield and around the North, but we'd missed them so far. Their social media presence shows they have no lack of confidence in their own ability to the point of arrogance at times (which isn't always a bad thing), so we were keen to see whether it was just bluster or whether they could deliver. 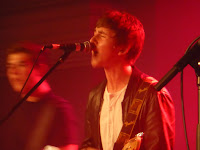 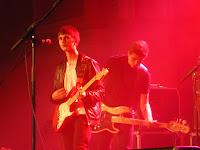 We have to say we're surprised at how good they are, that they can match their mouths (or fingers) with the quality of their songs, a rarity these days. They're not blessed with the best sound set up as James' travel problems meant they didn't get a proper sound check, but such things are also a test of how a band can deal with adversity and part of the learning process. They impress the Isle Of Man crowd and there's a few cries of Yorkshire at the end, but looking past regional parochialism, they look and sound the part - there's a very tight-knit insistent feel to them helped by the fact they're two pairs of brothers and when Brandon's drums lock in with Josh and front man Kiran's guitars and Andy's bass it's clear they're a band that have an instinctive feel for what each other are doing that'll serve them well. The reception they get at the end is far warmer and louder than some of the more celebrated support bands James have had in the past few years.

Despite a set full of songs with big sing-along choruses and they're aware of the power of a three-minute anthem they might just lack a real killer breakthrough single at the moment and there's the odd point where their (apparent) love of The Courteeners shines through a bit too brightly in a couple of songs, but they are minor quibbles and part of the development process. They play a new song called Blue that stands out towards the end of their set and suggests that they're still developing as a band and they save their real stand out song Chasing Shadows for the end. They're clearly not fazed by playing these stages and with a band of the stature of James. Their star is rising. 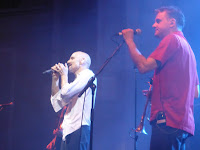 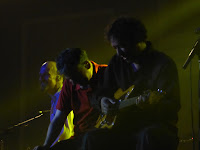 James open the set with the return of a much-loved classic from their earlier years when they couldn't get a break. Over thirty years old, Johnny Yen sounds as fresh and revitalised as it ever has. Andy Diagram's trumpet floating around the ornate setting over the improvised breakdown section. It's clear immediately that, despite only arriving on the island at six o'clock due to a flight delay allowing virtually no soundcheck and Adrian only having had a couple of hours practice sessions having flown in from Canada, that they mean business. A band can take flight in such circumstances, but James have always faced adversity head on, relished the challenge and battled their way through and tonight what hasn't killed them off makes them stronger.

The set, by necessity, is packed to the gills with the most familiar of songs from their back catalogue. But rather than disappointing us by not having that curve ball element, it reminds us of just how many stone cold classic singles they have - one stacked in after the other. If James have ever played on the Isle Of Man before it was a long long time ago (they get their first go at sitting down for Sit Down, which hasn't been seen in the UK for decades) so it's also perfect for an audience starved of live music without an expensive trip to the mainland. By resting songs for periods, even the likes of their less complex hits She's A Star and Waltzing Along come back invigorated and uplifting rather than simply a plug in and play disdain that so many bands treat their biggest singles with.

It isn't all about their big hits though as they play five songs from last year's La Petite Mort album, the biggest test of Adrian's ability to reintegrate into the live set. Saul takes lead on some of the guitar parts, Jim and Ron Yeadon help out on backing vocals and Adrian's natural instincts mean that the songs are as successful as those around them. It's also refreshing to see how the likes of Curse Curse and Moving On are received as rapturously as the behemoths around them on the setlist. The former almost breaks down at one point, but they rescue it and the smiles on stage show they're enjoying the evening as much as the rest of us. Interrogation understandably lacks a little of the guitar flourish, but Mark's keyboards and Andy's trumpet make up for this and create an unique twist on a song that lends itself to twisted inspiration and improvisation. 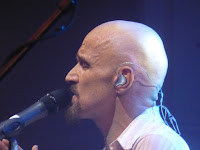 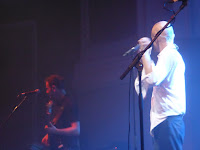 It feels like they're on a mission tonight. Fueled by the need to react to the chaos, Tim prowls the stage, encouraging, coaxing, challenging and engaging with his band mates, like a caged lion hemmed onto the stage by the modest security set up meaning an audience venture was unwise even by his standards, driving Adrian on to let go and show us what he can do on the likes of Sometimes and Sound, inviting a dancer up on to the stage during Getting Away With It (All Messed Up) who gives him a run for his money in the ecstatic dancing stakes.

Andy ends up on the balcony for Sound which closes the set but it'd be tough to top the moment when Saul picks up his violin on Out To Get You and delivers a virtuoso solo that has the band slowly coming back in and building the song to a momentous conclusion, but it's an evening strewn with highlights and no low points.

Tim tells us that the beauty comes from them not knowing what they're doing and the circumstances surrounding tonight collide and conspire to create something quite beautiful, special and unique - Tim described it as shamanic and it was one of those nights where music took us all away from the problems of the world for an hour and three quarters and assured us that everything will be alright in the end.

James played Johnny Yen, She's A Star, Waltzing Along, Come Home, Gone Baby Gone, Walk Like You, Tomorrow, Getting Away With It (All Messed Up), Curse Curse, Interrogation, Out To Get You, Born Of Frustration, Sit Down, Sound, Moving On, Sometimes and Laid.

Email ThisBlogThis!Share to TwitterShare to FacebookShare to Pinterest
Labels: James, The Sherlocks