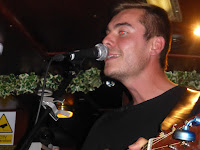 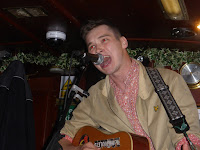 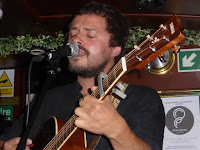 A gig on a barge is a wonderful idea and the next in a series of interesting venues for Liam McClair in the build up to the launch of his Honest EP in September. Whilst the industrial sites of Trafford Park might not make the best canalside viewing, our attention was held by Liam, Jordan and Hugo's brilliant sets in a very unique setting.

Opening up the evening's events just after we set sail is Hugo Kensdale, a name we'd heard but whose music we hadn't yet discovered. He often plays with a band and other musicians, but his set of articulate songs works really well acoustically. We find ourselves tapping our feet along to the likes of Slow Moving Traffic and Mr Humble Pie and transfixed by the intimacy of the appropriately titled Claustrophobia. He plays a new song called Zebras and Crocodiles that we'll be looking out for when he releases it, but it's the final track Animals that impresses us most, an impassioned heartfelt song that sees Hugo losing himself in the music. We're impressed. 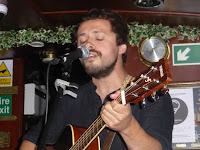 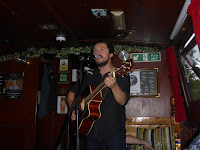 We're also impressed by Hugo's unflappable attitude. When the barge judders to a halt whilst performing a three-point turn he's completely unfazed and he also manages to resist smashing his guitar into the face of the bloke who insists on shouting a conversation to his mate about three feet away from where he's playing.

Next up is Jordan Allen and he starts off with a poem entitled The Boy That Time Forgot. What this makes you realise is that if he didn't have a guitar in hand, Jordan could well be a poet. His songs are full of social commentary and story telling in the way the likes of Mike Garry and John Cooper Clarke tell them. Take early single Rich And Famous where he muses that "a Jordan with big breasts is worth more than I'll ever be" as a case in point, but it's something that runs throughout his set on the likes of Unchartered Youth which focuses around observing night outs during his degree course in Leeds. 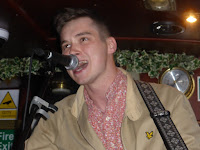 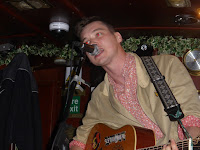 As he prepares to go in the studio with his band and a big-name producer, he reveals some of the newer material he's been writing - Go Home Alone, Dancing In The Dark, Blowing Smoke, Mr Blue Sky - and the songs are unmistakably him, retaining all that immediacy of his first few singles, but with a slightly older, wiser outlook on life. They rub shoulders perfectly with his older material though - and it's always a good test that songs still sound fresh and vibrant a couple of years after you first hear them and Daydreamer's Girlfriend, Set In Stone, I Wanna Be Remembered and the aforementioned Rich And Famous still do.

After promising to break through for quite a while, it seems that things might finally be on the move for Jordan and with this set of songs, his boyish charm and a band that translates these songs into potential terrace anthems, it feels like his time might just be around the corner.

It took us a while to "get" Liam McClair, we'll be honest to admit - we didn't fall for his open and beautifully structured songs immediately. He's not your archetypal singer-songwriter, there's a positivity that radiates throughout from his never-ceasing grin that actually makes it impossible not to warm to him rather than the incessant miserabilism that so many go for. He actively encourages audience participation at times such as on Lose My Faith and a communal singalong of the hook lines to Honest and Honey, something of an anathema to so many singer-songwriters revelling in their own angst, but which works perfectly and cleverly helps to shut up most of the remaining talkers. 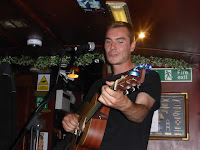 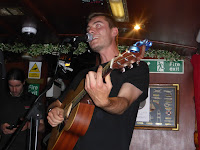 As a case in point, he opens the set with Alchemy, which will appear on his Honest EP next month, a song based on Paulo Coelho's The Alchemist. It sets the tone for the evening as he uses the intonation of his voice to alter the mood of the song as it does later in the set on the blues-influenced Cowardly Man or the perfect pop with a country tinge that is Someday. By the time he concludes his set with the title track from Honest and his previous EP Honey, he's utterly charmed everyone on board, not just with the songs, but his telling of stories and anecdotes behind the songs. Whilst he's now recording with a band for releases, the songs stripped back to their core with just his voice and the acoustic bouncing off the sides of the boat, above those that still think the rest of us want to hear them, feel something special, warming the heart, melting the soul.

There's also a couple of contrasting covers - mid-set he strips back Duran Duran's Rio in perfect symmetry to the contrast between the yachts of the Caribbean in the original's video and our position next to Kellogg's factory and by means of encore he spins an acoustic version of The Clash's Rock The Casbah that has people dancing and making us happy by this point we're back moored up ready to disembark as the barge starts to rock.

As we leave the barge, we're left to reflect on an interesting and unique evening in a very different setting to what we're used to and three different but complementary sets. After a city centre rooftop show before this, we're intrigued to see what Liam and his management team will come up with for the next gig (he is playing a conventional single launch at Gullivers on September 25th).