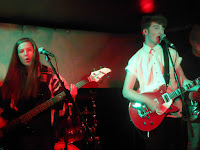 Tonight is Lunar's fourth ever gig, a warm-up for their now sold out in advance single launch at Manchester's Sound Control this weekend. Their set at the Kraak Gallery is beset by technical problems, but once things start working they show themselves to be a band continued to grow and develop with each show.

They open with Come Home and what's immediately evident is the strides forward they're making with each and every show. The time spent in the rehearsal room is clearly playing dividends as even in the short space of time since their first gig they're far more confident, the song hammering the listener into submission with its incessant hook line and insistence that it isn't going to sound like every four piece and their dog's rehash of their influences. 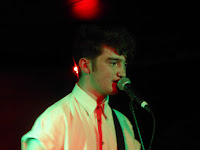 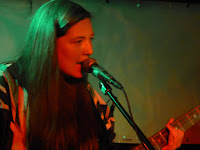 Gonna Get You Down makes use of the classic trick of playing front man Sam and bassist Christie's vocals off against each other. So few bands at the moment have that male/female vocal thing going on - and it's one of things that make The Tapestry by far the best new band in town now Blossoms have been signed - and it makes Lunar stand out in a scene where all-male bands seem to be championed above everything else.

Technical problems kick in, firstly with the drum, secondly with a broken string and an out of tune guitar. Rather than blindly panic, they fix the problem and get on with Love And Affection, a new song that suggests that there's much more expansive and varied material to come. The drum issue forces Sam to perform most of To Be Alone solo and it's the only part where his love of Liam Fray is a little too evident for our liking, but when the band kick in, it's almost a different song and our concerns evaporate.

Showboater again has that male/female vocal interchange and makes its claim to be the next single. Upbeat, fresh and showing off Luke's ability to wring captivating sounds from his guitar, it's a vitriolic dig at the "look at me" culture prevalent today.

The single Our Way has had a great reception since we gave it its first airing when we tipped it on Shell Zenner's show on Amazing Radio and it's fully deserved. The live version is a bit harder and looser than the recorded version, but is no worse off for that.  They close with a cover, which in many ways would be a cop out, but they don't go the obvious route. If it was their song, you'd be talking about it like Doves' Spaceface (ok Sub Sub's) which never feels out of place, but it's a rather unusual choice of Faithless' Insomnia that brings the set to an end. It shouldn't work, but it does.

It's one of the most rewarding things as a music fan to watch a band grow and blossom (no pun intended) into one that's ready to take on the world. Tonight was a learning experience for the band, playing to someone else's audience, overcoming technical difficulties that could (and it looked like it might at one point) overwhelm them and finding a way through.