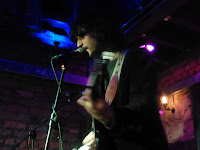 There's a renaissance of classic sixties-influenced airy dreamy psychedelia going on at the moment. Hidden Charms are one of the most excitedly talked about bands in this along the likes of Blossoms and The Vryll Society. We caught up with them at a sold-out headline show at Salford's Eagle Inn as they passed through on their road to bigger things.

For someone who goes to so many gigs, it's sometimes a surprise when there's a massive buzz of anticipation around a band as there is in the claustrophobic converted terrace house that makes up the hidden gem that is the Eagle's music room. Would Hidden Charms playing their first headline show in these parts live up to their growing reputation and the hazy dreamy brilliance of their debut single Dreaming Of Another Girl. The answer is a resounding yes. 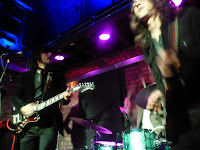 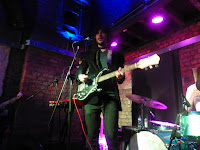 Live though, Hidden Charms are a very different proposition to that single. Of course that instinctive feel for melody and harmony is there throughout, but it's got a much darker filthy blues hue to it. There's hints of a whole range of influences flying around but what they're creating is something that has their own stamp all over it - like an unpolished raw diamond.  And they have the songs to back it up as well - the single and its b-side Long Way Down are the two best-known of course, but they play two new ones towards the end of the set (and they don't give away titles or have a set list or in fact tell us very much at all) that show they're going to be around for the long term.

With Vincent and Ranald sharing vocals throughout and the band swapping instruments around as well, there's no danger of this ever feeling stale. The likes of It's Time, which also has jack-in-a-box drummer Oscar on backing vocals as well, and Lady Like You are impossible not to love, there's an addictive warm undercurrent to them that feels totally timeless and grabs you and doesn't let go. Guitarist Josh, whose guitar head we spend the night swaying to avoid such is the premium on space in the venue, adds dark and deep riffs to the mix.

The crowd are transfixed by them and that's no surprise. Hidden Charms have everything they're going to need - a distinctive look that'll appeal to both boys and girls alike, a very evident joy of playing live, the ability to incorporate their influences into their music but create something that's uniquely them and, most importantly of all, some very great songs. They charm and conquer the room and leave another eighty acolytes in their wake.