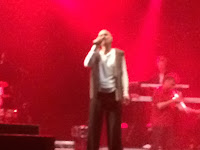 The picturesque setting of Hardwick Hall was perfect for a day's music festival. Sunshine, beer, half-decent festival food and a relaxed atmosphere meant the afternoon was a pleasant experience until the sky went dark at seven and we were then treated to four hours of torrential rain that turned the site into a quagmire. At the end of all that James produced a headline set that banished any concerns of trench foot, made us ignore the water streaming down our backs and legs and the lightning and thunder in the sky above us.

The festival setting allowed us to wander round and catch a few bands. Embrace were troubled by wayward sound that seemed to swirl around and go in and out and we've never really rated Danny live as a singer so we sauntered off to catch a set by Neon Waltz on the Discovery stage and were impressed by their psychedelic-influenced tunes and their front man's best Tim Burgess impersonation. Sadly the crowd had seemed more interested in sitting on the deck chairs near the main stage than catching new bands, but the small arena filled up for The Sherlocks. They delivered a fast, feisty set of three minute songs full of confidence that had people dancing and impressing newcomers to them as well.

It was at that point the heavens opened just as 10CC finished I'm Not In Love, Dreadlock Holiday and some frankly hideous harmonising. We took shelter rather than listen and drown to Razorlight and by the time James came on a significant portion of the crowd had given up as the skies lit up, the thunder rumbled and the ground became muddier by the second. What it did though was ensure that those that stayed were really in the mood for the show - ready to let go, dance, sing and jump around as the elements continued to bombard us. 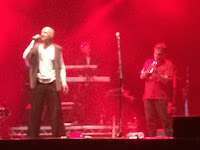 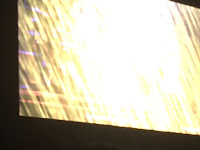 The set was perfect for the situation as well. A series of their biggest hits with the three most accessible parts of last year's La Petite Mort thrown in for good measure. Come Home had both crowd and band bouncing along as the rain got heavier often making it difficult for us to actually see them up on stage as it ran down our foreheads. The weather didn't impact on the sound though which had been fixed from earlier on and Ron Yeadon's additional backing vocals gave the likes of She's A Star and Curse Curse an extra lift.

Somehow spurred on by the inclement conditions, Sometimes was a revelation. The lyrics about a boy leaning against a wall of rain calling come on thunder somewhat apt as the sky lit up and the rain turned into a sheet rather than a torrent. But still the North East crowd, who usually give the band the best reception on their tours, continued to party regardless, singing back every word.

Most front men would play it safe at this point, but Tim made the slightly unwise decision to come down and meet his crowd and dived amongst us during Fred Astaire, risking being dropped head first in the mud bath that had developed across the site. He just about survived, if a little wetter than when he started. Sit Down ended up as a massive communal singalong, those being blessed by madness the ones, and there's thousands of us, that had stayed out in these conditions. Tomorrow, like the weather, was an onslaught, ending with Tim and Saul screaming the final part of the song eyeball to eyeball into Tim's microphone. 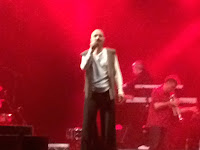 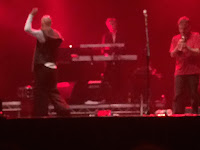 They finished the main set with a delirious drawn out version of Sound that rumbles as menacingly as the thunder that returned after a short respite with even more rain attached to it. There was no way that they're going to be allowed to leave us at this point and Tim came back down to deliver a poignant Moving On perched precariously on the barrier as the rain soaked him through.  The evening was topped off with a raucous rendition of Laid that had everyone jumping around once they could free themselves from the mud that had caked around their feet and ankles.

As in Porto last year, the weather made this a really special gig. It had the makings of a standard festival set with half the audiences relaxing on the fold out chairs that were discarded like a middle class garden party reenactment of the Somme by the end of the night. But the storm lit up the band and crowd as well as the sky and make it a night to remember once we'd all dried out and rid ourselves of the mud.

James played Come Home, She's A Star, Johnny Yen, Sometimes, Walk Like You, Just Like Fred Astaire, Curse Curse, Sit Down, Tomorrow, Sound, Moving On, Getting Away With It (All Messed Up) and Laid