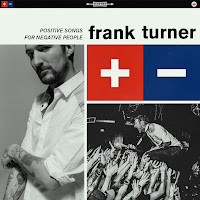 Frank Turner is an inspiration to any musician scraping around the toilet venues of the land that hard work, dedication and the ability to make a connection with people can take them from such humble surroundings to the festival stages and arenas of the country. He's back with an album Positive Songs For Negative People that is both sure to delight his already avid army of fans but appeal and reach more with his direct approach, lack of pretension and the uplifting mood of this album.

Lyrically, Positive Songs.. could be a concept album based around its title. There's the dry acoustic-led self-assessment of opening track The Angel Islington where he's trying to win back a loved one - "I'm the king in a kingdom of mistakes" leading into "Fuck the fishing, I will abdicate" or Get Better's uplifting clarion call "we can get better because we're not dead yet." It's a theme that runs through the record - turning the negative round into a positive, but rather than this becoming a tired cliche, Turner's ability to craft lyrics that appeal to everyone and in which anyone, whatever their situation, can relate to and find hope and resolution make Positive Songs a triumph.

He almost demands that you chant along the "rejoice" refrain that lies beneath "the storm has passed" revelation on The Next Storm. Even the song about the explosion of the Space Shuttle in 1986 has an air of hope amongst the tragedy of the event - "The darkness up above led me on like unrequited love, while all the things I need were down here in the deep blue sea."


The appeal of Turner is about more than just his words though. In an industry that's constantly declaring the latest unimaginative hyped band as the future and saviours of rock and roll and championing the supposed experimentation of so many bland and boring festival headliners, Turner makes no such claims and this record is no exception. It's a pure direct raw rock and roll throughout and never apologises for being exactly what it is - it's there to uplift people, make them sing along, jump around and not stand there thoughtfully stroking their chin and making glib statements that mean little. Songs don't outstay their welcome, only three of the twelve passing four minutes, but it's that directness and the fact that you often don't realise that we've moved on to the next one that makes this such a cohesive collection.

It closes with a very personal touch. Whilst the rest of the record was laid down in Tennessee, Song For Josh is a tribute to Josh Burdette, a close friend of Turner and the manager of the 9.30 Club in Washington who committed suicide, written before and recorded live at a show there and you can hear the emotion almost crack his voice at one point. He asks his departed friend with a resigned air what he could have done to help.  It's a very personal statement on a record that touches on a range of human emotions, feelings, failings and challenges, but ultimately leaves us with the simple consistent message that whatever life throws at you, because as he tells is in Demons "God damn, it's great to be alive", you should face it head on because that's the only way to get through it.

Filling arenas might be seen as a sell-out in the punk scene that Turner left behind as if success is something to be ashamed of, but he's remained true to his roots both on record but also in his approach to his fans and not forgetting the places that made him the musician he is. Strip away some of the production and Positive Songs is a record he could have made whilst still playing the boozers of the Holloway Road.