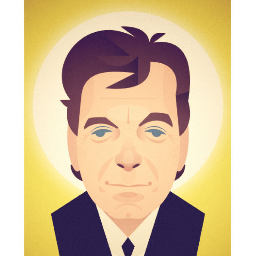 St Anthony is a poem written by Manchester's Mike Garry to commemorate the life of Tony Wilson who passed eight years ago this month after a battle with cancer. Mike has teamed up with celebrated composer Joe Duddell to produce a version of the poem that's set to music to help raise funds for The Christie where Tony was treated in his final days. We spoke to Mike and Joe about how the project got together and what they aim to achieve.

Were you familiar with each other's work before this project kicked off and what instigated it?

Joe: I’d heard of Mike but hadn’t seen him live before meeting him. I had checked out some stuff online tho.

Mike : Yeah I loved the work Joe did with Elbow - I thought it brought them to a new level

Mike, we've read that you never met Tony.  What was the inspiration behind you writing the poem in the first place and the content of it?

Terry Christian - a man under-rated for his vision purely because he is a working class Manc with a bit of a gob. But without Terry this wouldn't be happening.

Joe, had you met Tony when we was alive?  Do you have any particular memories of doing so?

I met Tony twice. Once at the edit of Happy Mondays Hallelujah which my friend was editing in a rush for Top Of The Pops and once when my old band Pullover were being looked at by Factory 2 in 1995. We put on a private showcase for him in London as he missed our Manchester gig. Unfortunately he thought we were “too polished” for him! We most certainly were not. Wish he’s seen us at the Bull & Gate that year…! 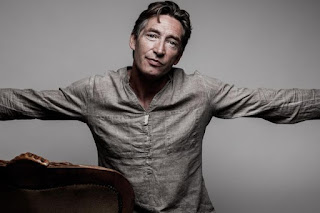 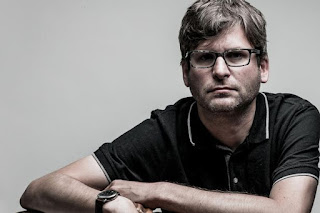 Mike, it's been mentioned that you'd had a few offers or discussions with bands about putting your words to music. What was different this time that made you go for it?

It wasn't an indie guitar band and Joe is a professionally qualified musician. He has worked and studied music for years and years and I find that makes you very good at what you do - the guy is a fucking genius man.

Joe, you've worked with many well-known Manchester musicians before, how different was it working with a poet rather than a lyricist?

Much different in lots of ways but a familiar feel at the same time. Although St Anthony is based on a New Order song, other poems I’ve set of Mike’s have been original compositions so that’s been a departure in some ways (although before working with artists and bands I was always a composer first)

Joe, why did you feel Your Silent Face particularly fitted the poem?

It was the rhythm of the words and the pace. Also Power Corruption and Lies is referenced in the poem (one of the few albums that is) so to reference that in the music made sense

Do you feel this project, as well as raising funds to support the fantastic work that's done at Christies, will also help the city celebrate Tony's life and achievements. He was always a maverick and it's only now it feels that he's starting to get the recognition he deserved for championing the city's culture and music.

Joe : I hope it does all of the above.

Mike : It's a killer project raising money and keeping Tony and the importance of Manchester music/culture/history on the radar

What we can expect from the launch event on Friday night?

Joe - A great performance and a celebration with hopefully lots of cash being stumped up!

Mike : A lot of bald people twitching who wished they hadn't taken so many drugs and drank less.

The single is being released as a download, CD and vinyl on Pete Jobson of I Am Kloot's Skinny Dog label and includes a remix of the track from Andrew Weatherall. There's a launch event at Granada Studios where Mike and Joe will perform the track alongside a number of famous Manchester DJs past and present. All funds raised by the project will go to The Christie.

Mike Garry's official site can be found here and he is also on Twitter.

Joe Duddell's official site can be found here and he is also on Twitter.

The St Anthony project's website is here, where you can pre-order the single and book tickets to the launch event to be held at the old Granada Studios in Manchester this Friday, August 14th. Follow them on Twitter for any updates.