Queen Kwong - Get A Witness 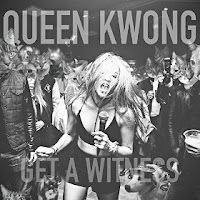 Get A Witness is the long-awaited debut album from Queen Kwong. Over eight tracks, Carré Calloway bears her heart and soul to the world on an album that's brimming with improvisational passion that refuses to play by any of the rules of the industry.

Queen Kwong has made herself a name for her incendiary live shows and the genesis of Get A Witness is very much in line with keeping with that spirit. Whilst some of the songs may have been in her live set for some time, the recording sessions for the album took just nine days. There's no time for fancy pre-production, excessive studio overlays, this is genuine raw visceral music that teeters on the edge, lives on its raw nerves and seeks to recreate that whirlpool of energy and passion of the live shows. It feels unfinished in parts, as if the songs haven't quite completed their journey, but rather than this be a problem, it enhances the impact of the record in a world where artists compromise the integrity and honesty of their music in the search for that elusive radio play.

The album starts off with Cold Daggers and guitars so jagged they'd rip you to pieces if you got too close to them and an incessant repetitive tight drum pattern that is the only constant point in the song.  It's that chaotic feel that allows Carré to allow the space and freedom that the band create to leap and bound from one vocal style to the next baring her soul through "the hole in my chest that's so damn wide" and it feels like the record is acting as a catharsis for her and we're only one song in at this point. Newt feels claustrophobic, Carré fighting the menacing suffocating sound of the band, battling demons.

The mood of the album then changes with the title track. A beautiful minimalist opening hinting at soft blues guitar and piano and a half-spoken half-sung tale of being trapped - "the room is a tomb" - and having lost love. Next up is a cover of Elvis Presley's Love Me, not necessarily what you'd expect sonically with what has gone previously, but in fitting with the mood and subject matter of the album it works perfectly. The delivery is beautifully pop in its execution, the simplicity of the music allowing Carré to emote the declaration of love perfectly.

Red Devil is a vitriolic picking over the bones of an old relationship, an exhumation of any lingering feelings set to a chainsaw guitar riff "now my things are in bags, set on fire like the trash, I've got nothing" - that hole in her chest that she refers to at the start of the record becoming a chasm and in fitting with the almost improvisational recording process, the last minute of the song, after Carré has her last word, wanders off into a world of its own.

The final three tracks - Medication, Purrfiction and Bells On - are further evidence of the impact of the recording process. It feels like the musicians are playing a different song and telling a different tale to Carré at times such is the improvisational spirit that pervades this record, but somehow it works perfectly - guitars collide head on as she proclaims "sometimes I wanna die so you'd have to love me forever" on the former or she revels in a new-found love of herself on Purrfiction.

Get A Witness is a unique record that doesn't play by any rules. Whilst it might lack a sense of direction as a whole and as a unit, this is more than countered by the raw uncompromised energy that runs throughout it. Like so many great debut albums - Patti Smith's Horses and Throwing Muses' self-titled spring immediately to mind - it's the public opening up of a creative mind with more ideas than the owner knows what to do with, more emotions than an artist is usually willing to share with their audience and a soul that is still searching trying to find their place in their world. It's not the easiest record to listen to, but it's one that's remained true to its creator's spirit and soul and one that will reveal more each time you hear it.

Get A Witness is available digitally from Amazon and iTunes.