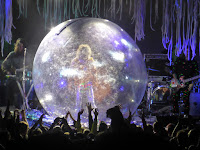 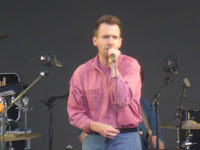 The second night of Magners Live at the Ross Bandstand in Edinburgh witnessed a psychedelic mind-bending set by The Flaming Lips against the stunning backdrop of the castle and fireworks displays. Manchester's Dutch Uncles provided the support with tracks from this year's album Oh Shudder and selected tracks from their growing back catalogue.

Supporting a band with such a thrilling live set-up as The Flaming Lips is a daunting proposition, but Dutch Uncles are certainly up to the task. Unafraid to wear their eighties influences on their sleeves, and name checking Kate Bush and Talking Heads in the process, they run through an upbeat set of keyboard-heavy songs from their four albums to date. They cover most bases of that catalogue - with four songs from Oh Shudder that was released earlier this year and its predecessor Out Of Touch In The Wild as well as the likes of Face In from their debut. 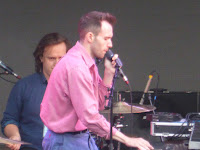 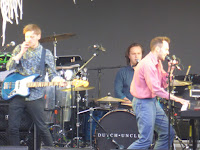 It'd be easy to dismiss Dutch Uncles as quirky, especially when you watch front man Duncan Wallis' dance moves which are very much rooted in the 1980s where their influences date from, but there's something quite beautiful in the hooks, rhythms and melodies of their songs that make you look deeper beneath the surface. They may not be of this time and not possess the postured cool of some of their contemporaries, but Dutch Uncles are a mighty fine pop band that deserve far more attention than they've had. The crowd go from being fairly ambivalent at the end of the first few songs to giving them a rousing reception at the end of their set.

There's always a sense of anticipation as to what you'll get with The Flaming Lips. They're a band with so many ideas, both aurally and visually, that you're never entirely sure what you'll get - whether those frankly weird elements that make up their show will come together and blow you away or whether they'll leave you standing there scratching your head and wondering just what they've been smoking. Tonight, for the most part, it's the former. 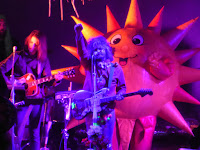 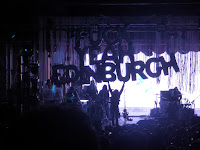 They start off late - front man Wayne Coyne tells us there's an issue inflating one of the gigantic inflatable butterfly's feet (we told you) - but The Abandoned Hospital Ship is a majestic opening that sets the tone for the rest of the evening's events. There's moments of hard, fuzz-heavy rock music interspersed with beautiful fragile moments of gentle psychedelia as the evening progresses.

Their set selection covers most of their best known songs - from She Don't Use Jelly, Yoshimi Battles The Pink Robots, Feeling Yourself Disintegrate and a set-closing Do You Realise as the fireworks from the tattoo on the "castle mountain thing" (as Wayne describes it) light up the Edinburgh night sky. But when they play less celebrated tracks such as Pompeii Am Götterdämmerung and Psychiatric Explorations of the Fetus With Needles the audience's attention is held rapt by what is happenning up on the stage. 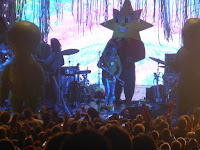 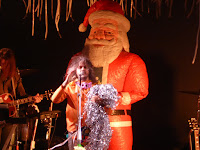 Despite the chaos going around him, with all sorts of inflatable figures (including Father Christmas - in August for christ's sake) filling up the stage and a massive silver "fuck yeah Edinburgh" that gets released into the arena, it's Coyne that you can't take your eyes off. For Vein Of Stars he puts himself into a inflatable ball and bounces out across the audience, he sings Butterfly, How Long It Takes To Die, almost suffocating himself with some debris from one of the stunts and he's insistent throughout that the audience get involved, repeating "come on come on" like an over-excited child between songs. At points there's a husk to his voice that makes you think it's going to give out but his adrenalin sees him through, whether it be letting off streamers into the crowd or standing against the fire-like backdrop is a messianic pose. 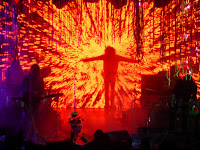 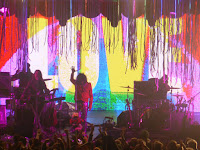 As their set ends to a repetitive, almost hallucinatory, flashing LOVE in captials on the screen backdrop, it encapsulates perfectly in a moment everything about tonight's show. The Flaming Lips are one of the few bands you could genuinely go and watch with little or no interest in their music and be completely captivated by their stage set. However what they do so cleverly is create a set that entwines music, visuals and the sheer hyperactive energy of Coyne into an out-of-the-ordinary evening's entertainment.