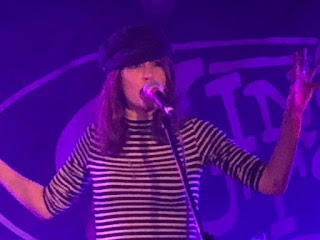 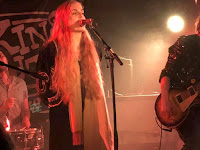 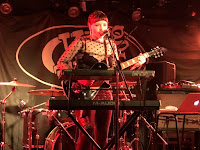 Findlay brought what felt like her first UK tour in an eternity to a close on Sunday night at Glasgow's King Tut's Wah Wah Hut supported by Brighton's MarthaGunn and local Baby Taylah. Playing the majority of songs from her debut album Forgotten Pleasures, Findlay and her band delivered a set that warmed up the audience and left us scratching our heads as to why she's still playing venues of this size.

Baby Taylah is the first of the support acts we catch and we're impressed by the way she mixes backing tracks with live guitar and keyboards and her emotion-filled voice to deliver four songs very different in their styles, but to which we find ourselves involuntarily tapping our feet. There's a world of difference between the minute she starts playing to her in between song chat where she effectively takes the mickey out of herself, laughing at her "supply teacher on a night out" look and wishing she hadn't put in the huge hooped earrings and telling us that her Dad is probably tutting at her talking such nonsense. But to be honest, it actually endears most of us to her a little bit more.

She's got the songs too. Pulling Out Big Guns and For Hearts are full of attitude and delivered with a poise and an insistence on being heard that's impressive, whilst Is It True, cut down from a seven minute rant at an ex who's wronged her into something more palatable is more acoustic in its approach but no less impressive in its end result. Amy, for that is her name, finishes though with Good Enough, which she tells us is everyone's favourite song of hers, and she can add us to that list as well. She's releasing this dramatic piece as a single in the new year and hopefully it'll give her exposure to a much wider audience.

Next up are Brighton five-piece Martha Gunn and it's clear from the start that they mean business. Fronted by Abi, one of the most natural and fluid band leaders we've seen in a long time, their set is one big melting pot of unashamed rock and roll, whether it be big bold anthems or when they slow things down and still maintain the enthusiastic response they get from the Sunday night Glasgow crowd. By the end they're eating out of the palm of their hands, having been summoned forward to dance, to clap their hands in the air to tracks like Hell For Leather and Honest.

They're an incredibly tight live unit without ever looking they're going through the motions. They've got the gang mentality that you can sense from a band in the way they interact with each other on stage. That translates itself to the audience as well who in all likelihood will never have seen them before as this is their first ever Scottish gig, and actually the first time Abi has set foot in Scotland. When they give the standard patter about being excited, you've got no doubt that they're genuine because it feels like their means for existence is to play live and that translates to the audience. For a band we've never heard anything by before they start to play, by the end of the set we want to hear a whole load more. 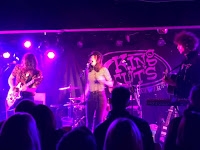 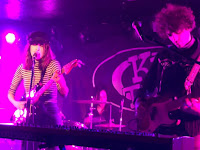 It's almost a miracle that Findlay is still here making music, lesser characters than Natalie would have been disillusioned by the industry shenanigans that effectively put her career on hold for two years just as she was gaining momentum. Buoyed by a continually loyal fan base both in the UK and Europe, she's still here though and has plenty to say, as evidenced by her debut album Forgotten Pleasures, which eventually saw the light of day earlier this year.

It's that album that makes up most of tonight's impressively long set, with a new song Christina mid-set showing that she's still got a creative spark burning deep and they also deliver an exciting cover of Shocking Pink's Postcard, which fits seamlessly among her own songs, which feature eleven of the songs that make up Forgotten Pleasures, including that run of singles Off And On, Greasy Love, Junk Food, Monomania, Waste My Time and Electric Bones that should have seen her break massively in the past three years rather than struggle for airplay and an audience for reasons beyond her control. Together on the record and in this live set where Natalie and her band bring them vibrantly to life. It's a dark bitterly cold Glaswegian Sunday night, but there's an energy not just in her performance, but that of her band, and in the camaraderie between the four of them that gives these songs a harder edge like they mean every word and every note.

Things don't go to plan at first with the keyboards cutting out twice during the first song and some feedback issues which means it's only at the third attempt that they actually get going. Fortunately they shake this distraction off almost immediately, making light of it rather than being thrown off course. Whether she's playing guitar and simply leading the band, Natalie is the absolute show woman, living every moment of these songs, engaging with the audience throughout including humouring one almost incomprehensible heckler who insisted on shouting between songs towards the end of the set. One minute she's singing of the pleasures of hot and sweaty sex in Greasy Love, the next on Monomania declaring "no one loves you like I do."

By the end of the set we're even more confused as to why Findlay isn't a huge star. She ticks all the image boxes that the industry look for, but her steadfast refusal to conform to what's expected of her probably counted against her. What that does though is actually accentuate her appeal to those fortunate enough to have crossed her path. Effortlessly cool, able to move from full on rock songs to playful moments to a slower more seductive approach without breaking sweat, she's as potent a live act as ever with an excellent band at her side. With the promise of new material in the offing for 2018, maybe her chance to break through will come again and we'll cherish intimate nights like this.