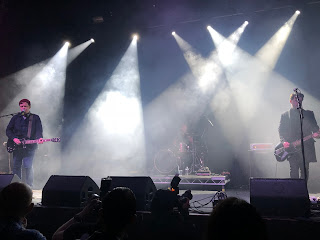 Sacred Trinity, Peer Hat, their debut London show, Head For The Hills second stage headline and their own packed Gorilla show have made it quite the year for Ist Ist and for their final Manchester show of the year, they top the bill at the iconic Ritz for Scruff Of The Neck's Christmas Blow Out party.

The crowd that had bounced around to the likes of Glass Caves and Larkins had dissipated by the time Ist Ist came on to stage, testament to the fact that they're sort of the black sheep of the Scruff Of The Neck family, not really fitting in with many of the other bands on the label in terms of style or target audience, although it's interesting to note that those who didn't run for the last bus for school or college the next day soon got into the contrary noise that they were faced with.

That trajectory of shows that Ist Ist have played this year has seen them grow into the more exalted surroundings. Still a ferociously intense live band, as demonstrated by Adam's blood-curdling yell during final track Diversion, they've also opened themselves up and let their audience into their dark world which on the likes of Strangers, Silence and Right Before Your Eyes, their last three singles, is surprisingly welcoming. Whilst they wouldn't dream of writing songs full of pop tones to try and win over an audience, behind their imposing presence and the incessant pounding of Joel's drums is a knowing acknowledgement of melodies and changes of pace to songs that set the audience's pulses racing and form part of the reason why they're regarded by their older audience as the most thrilling live band in town. 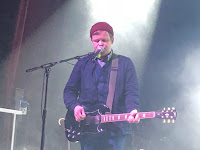 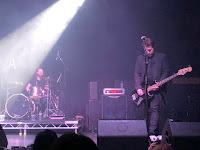 Whilst it's very clear that tonight they could just do with having everything turned up to at least double the volume, they fill the room, something that we've seen some great unsigned bands from this city fail to do when given the chance. Opening song I'm Not Here, played live for the first time, looks set to follow the other five into the dark hearts and minds of their growing fan base. Right Before Your Eyes, their most recent single, feels like they've hit the sweet spot with the song and worked out just the right tempo to play it at to make it have maximum impact.

Emily, written for Adam's wife, is a song that's survived the cull that put paid to many early favourites and it feels like it's a song evolving and waiting for the time it's asked to step up to the plate as a single. You can hear where they're tweaking it, trying to perfect it, yet still not losing that energy that sits at its core. Silence makes the Joy Division comparisons more ridiculous each time they play it, and that and Strangers that follow it have the most pulsating and exciting bass lines that crash into a wall of guitars and drums and then soar off into the distance. The moment the chorus of the latter kicks in is like the moment of epiphany when you realise this is size of hall Ist Ist should be playing in, the scale that these songs demand. Whilst they lack the immediacy of The Slow Readers Club, that was the last time we had that feeling with a band from this city.

They finish with Diversion, a spectacularly angular song that ducks and darts through different passages, trying to change and shed one skin like a chameleon into another. Starting with a simple drum beat that puts you on edge wondering what's coming, stopping dead then kicking in with a bass line over which Adam half sings, half threatening mumbles the verse before letting loose with a violent shriek that echoes round the room.

With a run of limited edition singles and a live album behind them that sold out in ever shorter time and their debut EP planned for early 2018, it feels like there's a momentum building behind Ist Ist, a recognition that they might not play by the same rules as the other bands in town, displaying that arrogance that the greatest Manchester bands always had in their own ability and making a mould rather than trying to fit into one. It's why they don't just have fans. If you get Ist Ist, you love them unconditionally, like the band there's no half measures.