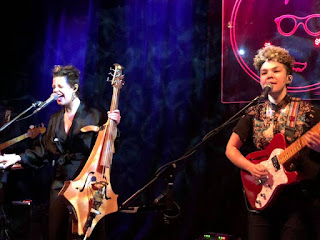 Moulettes returned to Manchester as part of their extensive UK tour supporting their last album Preternatural. The four-piece transformed the concept album into a chameleon-like live set that fused rock and folk and points in between without ever going off piste as the dual vocals and on-stage interaction of Hannah and Raevennan made for a visually as well as aurally exciting hour and a half.

Concept albums are always tricky beasts and more often than not they don't work. With Preternatural, an album about creatures but which explores how the activities of them can be related to human behaviours and responses, the concept on paper doesn't look strong. However it's a roaring success and even more so in the live environment where Hannah has the ability to explain the stories behind the likes of Pufferfish Love about the Japanese variant that spends a week building a sand castle to woo his partner or the immortal jellyfish of Medusa who is being bred as a beauty treatment to keep old women looking young whilst the dramatic intent and interplay of the songs can be brought to life to the eye as well as the ear.

Moulettes have undergone quite a transition from their folk days of their self-titled debut album, both in personnel, but also in vision as their final song Requiem aptly demonstrates. Here, cello mixes with traditional rock instruments such as bass, drums and guitar and some keyboard and sampling trickery to create something that one minute feels prog, the next folk and the final minute (of Medusa in particular) something so very quiet and playful as Hannah and Raevennan tease each other who will play the last note. With Richard (drums) and Oliver (bass) helping to glue these songs together, they manage to both threaten to blow us away with volume and then suddenly seduce us with warmth and detail. The other older tracks, Between Two Mirrors and Lady Vengeance from Constellations and Songbird from The Bear's Revenge also benefit from this new line up's direct and open approach to their performance.

The real excitement in the Preternatural songs comes from the sheer volume of ideas that make up every song. Whilst many bands adopt a verse-chorus-verse-etc approach to their songs and seek to replicate it, Moulettes jump from one idea to the next, often before the prior one has been fully-formed and lived out to its end, always afraid of standing still and losing the interest of the crowd. The telling of stories helps us engage with the songs and understand why there's songs about octopus, coral, birds of paradise and parasites like Rupert Murdoch and also strips away the intensity of the performance into something more welcoming between songs.

There's humour as well, a request for Behemooth is met with a response that they haven't finished yet and without spoiling any secrets that song is quite popular, Hannah joking they're not going to turn into Morrissey circa Glastonbury 2003 and just play "the shit songs" and there's a moment at a delicate end to a song where they stop just as an audience member drops a glass and everyone bursts out laughing. This creates a warmth and inclusion for the audience to involve themselves more in the show and interact with Hannah as she asks us to rate our day.

Moulettes have been going for over a decade now, always on the outer fringes of the music industry, always unfashionable and not caring about that fact one jot, creating music that's always changing and evolving, like the personnel line-ups of the band themselves. Tonight they deliver a set that brings Preternatural back to life, encouraging us to go back rediscover, reevaluate and learn something new about the concepts it talks to. They make it fun too and the diversity of the sound ensures that we're gripped to what twist or turn they're going to make next.

Email ThisBlogThis!Share to TwitterShare to FacebookShare to Pinterest
Labels: Moulettes, The Moulettes