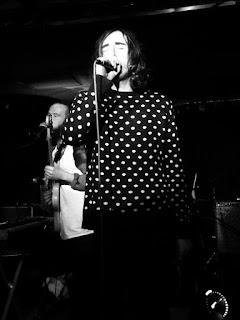 Purple Heart Parade have been away for most of 2017 building up a not inconsiderable and growing fan base around the country including London where they came to the attention of one of the most adventurous psyche labels in the land AC30 with whom they promptly signed on the dotted line. Ahead of an EP release and more in 2018 they returned back to Manchester to one of their old haunts Aatma for a low-key homecoming. Support came from Burnley's The Goa Express.

The Goa Express have been building a growing following in 2017 and it's clear that some of tonight's crowd have made the trip especially to see them. They're an interesting contrast to the headliner as they deal in rich melodies and songs that are more likely to hit you first and then run off as the next one moves in for the kill. Songs will often clock in under three minutes so that your attention is never allowed to wander too far. 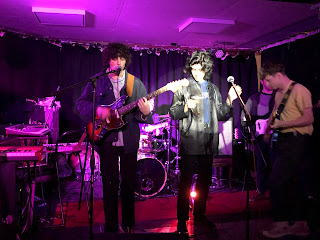 Driving guitars and slightly wonky but perfect just the way they are keyboards are tied into hooks that lift you up by your coat tails and they seal the deal with a mix of three vocalists who share lead responsibilities and get involved in call and response sections in songs across the set. Since we last saw them they've got new songs in their armoury as well that show that they're still developing as a band and tonight you can sense that they've won themselves even more admirers.

It's one of the strange anomalies of the music industry that Purple Heart Parade seem to be doing better outside of Manchester than they are at home with their London shows being packed out and Manchester shows like tonight feeling like they're coming home to seeing their mates who they started off playing to. Perhaps their performance is too intense, their refusal to operate under any of the usual rules of song structure too difficult or even perhaps Pete's penchant for coming amongst the crowd and throwing himself to his knees may be a little much for some but all of this is intrinsic to the experience of listening to and watching them. But whatever their reasons, none of that even enters the minds of the faithful down the front who abandon everything to them for forty five minutes.

Since they've been away and got themselves signed they'd been working on an EP for AC30 and whilst they give little away about the content they've got new songs Mission Hills and Red Rose Country mixed in among old favourites such as The Room and their encore Starfucker Blues.

We're two minutes into Pepsi Cola Addict, a swirling whirlpool of guitars that slowly build, before we hear Pete and like many of their best moments, Purple Heart Parade are at their most intoxicating where he's fighting to be heard over the maelstrom until everything drops down and his reverb soaked voice takes over. Butterfly House aims high before descending from the clouds and floating around wistfully with Pete's vocals drifting off harmoniously as the song comes to its conclusion. Mission Hills swirls around gracefully, Pete sounding almost angelic in the first verses as the band sound like they're holding back before unleashing themselves on the suspecting listener with a blistering control of pace and volume. 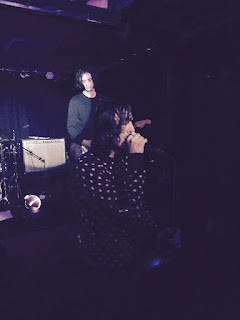 Red Rose County starts off even more wistful and reflective and provides the perfect foil to the reverb that soaks Pete's voice. The way the song soars and then drops back down and then repeats the trick feels like they're allowing us a calm before the storm and the set-closing Lone Star operates with a similar philosophy, but a very different gameplan. The Room gets cheers of recognition although as the song itself has lived through various variants on the Purple Heart Parade line up, it's a very different beast to when it was unveiled as the band formed three and a half years ago.

They're called back for an encore of crowd favourite Starfucker Blues, still a big booming hulk of a song that bowls everyone over in its wake and takes no prisoners. It's a glorious uplifting final reminder that Purple Heart Parade can take an audience and lift them out of their skin. As it comes to an end, the audience demand more, forcibly in some cases, but they're gone off into the night leaving us with a strange sense that we won't see much of them next year as they've got fields further away to conquer.