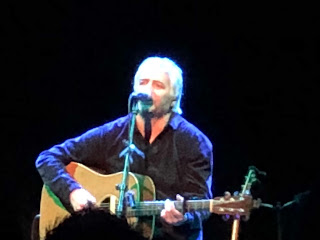 The big room at the Royal Northern College Of Music is the glorious setting for the final date on John Bramwell's tour to launch his album Leave Alone The Empty Spaces. A seated crowd was treated both to favourites from his I Am Kloot back catalogue, but also a sizable selection of songs from the album and its as-yet-unreleased follow-up. Support came from Dave Fidler, who also performed later as part of John's band during his set.

Dave's joined by his brother Andy (who also features in John's band) at the start of the set for Silver Spoon. It's immediately clear that these refined surroundings are going to give us a sound all night that's perfect for the acoustic guitars that lead most of the songs, but also allow every little detail and nuance to be heard by the audience and not get lost. He opens with Silver Spoon from his debut EP I'm Not Here, a beautifully simple song that shines for that very reason. Dave's connection with the crowd is down to that, he hasn't got airs and graces, just a slightly mischievous polite charm that wins people over. Add to that the quality of the songs, steeped in classic songwriting traditions, but with his personality and warmth mixed into them, and it's no surprise that John's audience have taken to him and there's no complaints that he's still supporting. 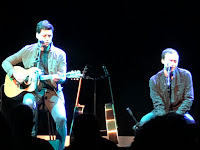 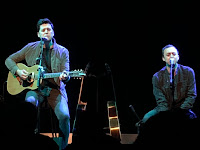 He's also recording a new album which means he's road-testing new material. Love And Electricity, Can't Stand It and Home To Me should all feature on the next record and if they're any indication of what's to come, it means album two will be a progression from the debut, but without sacrificing anything that made it such a poignant and immediate record that hit raw nerves on first listen because of the personal nature of some of the songs, a theme that's continued on the likes of Home To Me. He adds in mouth organ on Easy Gone Easy Come, Andy contributes cajon and backing vocals to some of the songs to lift them and they finish on a cover of Simon And Garfunkel's Last Night I Had The Strangest Dream which feels particularly poignant and spine-tingling as there's hardly a sound in the hall other than their voices.

There's a really expectant buzz in the hall as John makes his way to the stage "with a touch of the James Bonds" after Dave, Andy and his other two cohorts Alan Lowles and Adrian Gautrey strike up the opening bars of the album's title track. It's immediately clear how relaxed John is and how he's struck up a rapport with his band mates on these new songs. Dave had earlier referenced "the revitalised John Bramwell" and it's easy to see what he means. Between songs he's full of his usual chat and lots of stories we've heard before but which never stop being funny, even telling us people say they like to hear them every time. He jokes about tuning the guitar, joking he traded in his tuners for a massive curry in Birmingham, and spending half the gig talking instead of playing, getting tangled up in his guitars when he changes them over which leads to a tale of knocking a guitar tech over as he came on with a new guitar and he does a mock commentary of someone going out to the bar for a drink.  He's ditched his traditional bar crate that he rests upon for a stool, referring to the "Val Doonican years" as a result although later he's given a foot stool that turns out to be too low.

The first half set is predominantly focused on his I Am Kloot catalogue, the songs stripped down to just an acoustic guitar, the genesis of their creation, whether it be as far back as the turn of the century and the likes of Bigger Wheels and No Fear Of Falling (which he plays unplugged at the end) or the later period Sky At Night and Let It All In songs such as The Moon Is A Blind Eye, To The Brink, Masquerade and Bullets. There's almost silence in the hall throughout the set, save for a guy behind us who insists on commentary on songs, , a respectful reverence as he holds our attention with every strum of the guitar and has us hanging off every word. 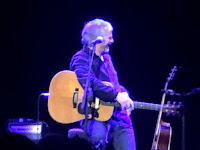 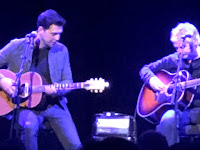 As ever there's a great connection between John and his audience, well-meaning heckling between songs greeted with a smile, a laugh and a reply, one time shouting "Hello scousers" to some guys up on the balcony and engaging in repartee with others throughout.

He's joined by Alan on keyboards for parts of the set which adds a different twist to the versions of Kloot songs that people have come to know and love. The addition of keyboards to Gods And Monsters, Bullets and 86 TVs add to the tension inherent in the original. The Same Deep Water As Me makes a welcome return to the set and is dedicated to his girlfriend Jo as it's her favourite song and John doesn't even mention the boost it's just received by featuring on the BBC1 series The A Word. It still remains one of his finest compositions ever, stripped down and with every little nuance in John's voice transmitted via the crystal clear sound it's even more evocative than the full band version. 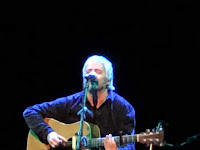 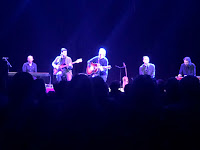 The main set ends with seven new songs, four of which are so new that they don't even appear on Leave Alone The Empty Spaces. The full five-piece band, with both Dave and Andy singing backing vocals and harmonies, is a perfect means of delivering songs that stand up to and in some cases above anything John has written before. There's a joyous feel to them, a spirit of reinvigoration and love in them that's very clear even by the grin on John's face at the end of each one and how he tells of coming up with Who Is Anybody Anyway whilst sat at home on the sofa with his dog Henry.

The as-yet-unreleased songs, which John introduces to bigger cheers each time, are more upbeat than the Leave Alone The Empty Spaces songs, deliberately so in John's two album plan, and there's genuine beauty, hope and optimism in the likes of Working My Mind Off and World Full Of Flowers that hasn't appeared in much of John's work before and, as each one finishes, the smile that cracks across his face at the response to songs most people in the crowd have never heard before tells its own story. It would have been easy to sit back and work the circuit of acoustic singer-songwriter playing the same set of ex-band classics to a solid but slowly declining audience waiting for the inevitable band reunion, but this new material is something genuinely special.

Inevitably the encore contains Northern Skies and Proof, both of which allow audience participation and feature right at the top in John's best known songs, before John moves away from the microphone as the band leave the stage for No Fear Of Falling as the room falls completely silent to listen before erupting in applause and giving him a standing ovation at the end.

As someone who's followed John's career for the best part of three decades, it's wonderful to see him looking as happy up there on stage as we can remember and that time hasn't dimmed any of his creative spirit and ability to craft lyrics that touch both the heart and soul and which can be related to through the listener's own experiences even though they may differ to John's. With Leave Alone The Empty Spaces getting a hard release in February and the second album due at some point in the not too distant future, it feels like John has got his mojo back.

John Bramwell played Leave Alone The Empty Spaces, Bigger Wheels, Meet Me At The Station, Mouth On Me, Masquerade, I Still Do, Time's Arrow, Fingerprints, Astray, From Your Favourite Sky, Gods And Monsters, The Same Deep Water As Me, Bullets, To The Brink, The Moon Is A Blind Eye, Who Is Anybody Anyway?, From The Shore, Working My Mind Off, Days Go By, Sat Beneath The Lightning Tree, Get Away From This (Leave No Traces), World Full Of Flowers, Northern Skies, Proof and No Fear Of Falling.