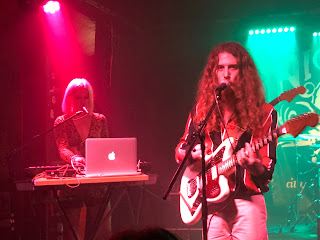 There's a lot of hype about Fuzzy Sun at the moment. They appeared in Blossoms' Christmas video and rumour has it that Tom Ogden is producing their forthcoming debut single and they've already booked in a four-night residency at Jimmy's for February through to April next year. All of this without having a single out in the public domain. Last Friday's show at Jimmy's was billed as their debut gig so we went along to see if they lived up to the billing.

This isn't actually their debut gig as they supported Redfaces at Jimmy's a week or so ago, but they've absolutely packed out the Night And Day and it's an audience that's here to actually listen to them as well, something that isn't always the case when a hyped band that no one knows the songs of plays one of their first shows.

Vocals are shared with Kyle as lead and synth player Daisy on backing vocals and harmonies and this gives their songs a very laid back and melancholy feel to them. They certainly aren't ones for bowling over the crowd with loud guitars, preferring something more seductive and alluring, drenched in light psychedelia that the dual vocal approach helps to spread. There are guitar solos, particularly on the slowed down Deep, but they're the sort that wash over and around you rather than blast your ears off. It means that you're not going to get the immediacy of what the hype machines refer to "bangers" but you sense that they're smart enough to be playing a different game. 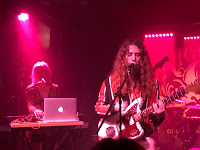 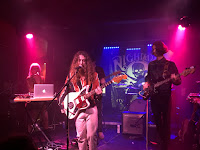 Do they have the songs? It'd be unfair to judge any band definitively at the stage of their second gig as most bands will have ditched a lot of songs they play at early shows as they develop their writing before they're six months down the line. However, there are signs that they've got at least four - So Sad, Keep It Up All Night, One Love and their forthcoming debut single After All This Time that will win over hearts and minds very quickly. They've also got enough about them to make their own rules, deliberately not sounding like anyone else yet still sounding eerily familiar. And by cramming seven songs into their twenty-five minutes they also avoid the pitfalls many bands do of overcooking the songs.

Are they worth the hype? The audience response says it possibly is, but of course it's way too early to tell. They didn't blow us away and have us staggering out proclaiming the next big thing to all and sundry, but then when has a band playing their second ever gig done that? They've definitely got something though. With the lack of any recorded output, we've excluded them from our Tips For 2018, but, in reality, we suspect you'll be hearing a lot more from them than many, if not all, of the bands on that list.