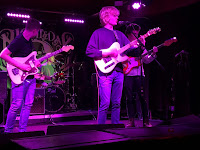 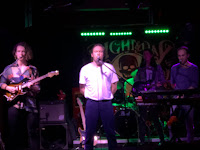 For a band just six months into their existence Kula Bay are making the sort of buzz that bands have taken years to generate. Already favourites of BBC Introducing in both Manchester and Liverpool due to them coming from Warrington, often a musical desert until recently smack bang between the two, with their debut single 7 Hours, they can still count the number of shows they've played on a pair of hands yet they've headlined Academy 3 and tonight The Night And Day Cafe. Reassuringly they prove again that they've got the songs to back up their growing groundswell behind them.

Before Kula Bay we have a set from Leeds' band Heir, who for some reason think there's an enmity between the two cities other than on the football pitch and terraces. On the contrary, they win us over with both the quality of their tunes but also the energy in their performance. They're not afraid to take their influences, we hear Everything Everything and Talking Heads in there, but to mould them to create something that's their own. They've got a love of backing vocals creating harmonies that immediately makes us warm to them as using more than one voice gives their songs a lift that transmits itself to the audience.

The songs are impressive too and get better as the set progresses and this draws the audience in. Their recent single Need You The Most is a highlight, but other songs like Call Me, Automatic and their set closing After Forever don't shirk in comparison. Their aim is to get you moving, get you dancing or at least tapping your feet and a look round the room suggests that they've achieved their objective.

The sign of watching a new band that's going to go places find their way in their early gigs is to see how they've progressed since the last time you saw them. Kula Bay are making small steps at present, but you can see how they're going to turn those into strides as they become more accomplished live and their audience starts to grow. Already since the Academy 3 headline they've ditched any distractions to their core, the set of great songs they've already accumulated, as well as the covers which sadly still get unequal attention in any new band's set due to their familiarity.

They make this look and sound effortless too. 7 Hours is one of those songs that come out of left field every so often and announce its creators to the world. Often it's the case that a band might have just thrown out their best song and then struggle to replicate it, but that's far from the case here as Kula Bay have a seven-song set that belies their relative inexperience as a band. Lost Without You, One Thing I Want and Fool could all of have the same impact that 7 Hours had, immediately being picked up by BBC Introducing and getting repeat plays.

They also feel like they've already gelled into a groove as a live band. They have that intuitive relationship that means that they're in tune with each other so that they don't need to constantly look for reassurance from each other. Matt will take a song in a different direction with a guitar solo that's neither showy or overly fussy, but which diverts your attention to just how good a guitarist he is, but also that he's not trying to be the star of the show. There's a natural feel to the combination of lead singer David and drummer Oli's vocals, a call and response at times, harmonies at others, whilst bass player Matt does what all great bassists do, hold the whole thing together in a cool understated manner.

Whilst it'd be unreasonable to expect a new band to be perfectly polished with less than ten gigs to their name, there's something about Kula Bay that goes beyond the immediacy of the songs and the way they play them. There feels like there's a determination already that they're going to fulfil their undoubted potential, a confidence in it that they back up by their performance and a desire to make this show better than the last one. Some of these songs might not make it through to when they get to their debut album, but in the here and now they're going to win hearts and minds once they get heard by a wider audience and that's Kula Bay's challenge for the first half of next year.