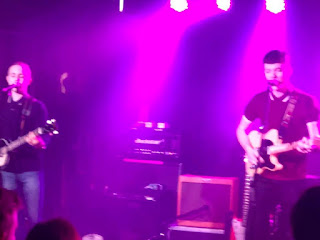 One of the most promising new bands in the country, The Gallerys, made a prompt return to Manchester following a couple of shows in October with a support slot for The King Blues at Club Academy. Playing to a crowd unfamiliar to the three-piece's cheeky brand of indie guitar music that sees all three of them taking on lead vocals during the set, they won over the audience with an ease that suggests that big things may be on the horizon for them in 2018.

It's not hard to tell why The Gallerys have made such an impact in their native Kent and surrounding counties. They take decades worth of influences and fuse them together into something that sounds instantly familiar yet never sounds like they're simply replicating someone else's formula. It's a trick that many less smart bands regularly fail to achieve. The way they share lead vocals, usually alternating between James on lead guitar and Craig on bass with drummer Dan providing backing vocals, also allows them to mix things up, even having Dan take centre stage on Doctor Friend, although we're not quite sure how he manages to both play drums with such ferocity and sing too, particularly as the song jumps around all over the place. 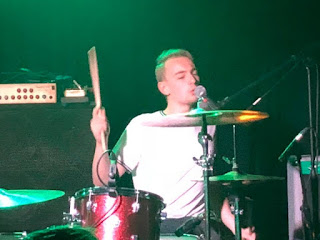 For a band that's not been around for ages they've got an impressive armoury of songs at their disposal, so much so that the title track of their forthcoming EP It's Up To You isn't even included in their set. What we do get though is the sublime Paisley, a song that summons up hazy memories of a summer of love in vivid technicolour whilst the majestic Over The Bridge which displays their ability to effortlessly create songs that attach themselves leech like to your brain.

They've got new songs as well that can have a similar impact. Shadow Street, written about a road in Maidstone, has the audience clapping along by the end, no mean feat for a support band in their home town, let alone two hundred and fifty miles away, whilst Lucid Trail is a slowed down acoustic number that still manages to hold the crowd's attention, again quite a triumph for a support band. With their youthful mix of cockiness and smiling faces they've won the crowd over by the end of the set and won themselves a new crowd of admirers.