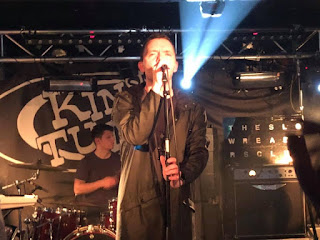 The Slow Readers Club's triumphant sell out UK tour came to an end in Glasgow last night in the hot, sweaty and celebratory confines of King Tut's Wah Wah Hut, a gig that sold out four months ago with weeks of being announced. It felt like an end of tour celebration and a party at the end of a year where they've capitalised on the success they enjoyed following the James tour in 2016 by filling rooms they'd have only dreamt about two years ago.

As Victories At Sea complete their set the anticipation is the room is already at fever-pitch levels as is the temperature. By all measures, King Tut's is now way too small for The Slow Readers Club and tickets had exchanged for £60 on viagogo in the weeks leading up to the gig.  Whilst the recent Albert Hall gig in Manchester was impressive for the sheer scale of it, this is much more an intimate affair, every one in here seems to know every word of every song and prepared to sing them with the band from the start of Fool For Your Philosophy to the last strains of I Saw A Ghost.

It's not hard to understand why though. There's no dip in the set, no awkward album tracks that the band love but which sit uneasily with the fans, no weird experimentation, just song after song, from both their albums and four equally if not more impressive new ones. Once your feet start moving and the adrenaline kicks in, you're immersed in the songs, in the gigs and in the love and passion in the room that feeds off itself and gets even more emphatic as they deliver the likes of Start Again, which sees everyone mimicking Aaron's clock-like arm movements in the chorus, One More Minute and Feet On Fire with their punishing punching beat and soaring choruses and new songs Through The Shadows and Not The Only One, which are a little less full on, but with no less impact, particularly as they allow Aaron to demonstrate the impressive range of his vocals. 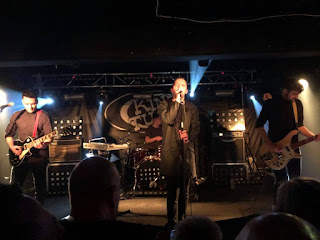 The band sound like a very tight knit coherent unit now. David and Jim may not get the accolades that Aaron and Kurt do, but like all great bands, The Slow Readers Club are more than the sum of their parts. There's a moment during Lost Boys where Aaron and Kurt share vocal responsibilities and catch each others eye and they both turn and smile and look at the other two.

By the time they get to their recent single Lunatic, released well after this date sold out, the crowd are in full flow, the chants of READERS are so loud and continuous they have to wait for them to subside before starting the song and as Lunatic reaches the end of the first chorus and before the second verse kicks in, the Glaswegian anthem "here we, here we, here we fucking go" kicks in from the crowd, a sign of where they're now heading and the atmosphere that's now being created at their shows.

It's followed by Opened Up My Heart and half the crowd know the words already from the videos circulating on You Tube driven by the excitement of what the band's fanbase, and the band themselves we assume, think the song will do for them when it's released next year. An earworm, anthemic, powerful and made for radio and the big halls they're going to be filling next year. If it's a sign of what's to come from album three, then they've managed to meet the challenge of bettering 2015's Cavalcade head on. 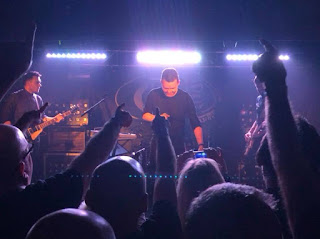 They finish the main set with Cavalcade's closing track Know The Day Will Come, but don't go off for the encore ritual because as Aaron delicately puts it "it's fucking cold outside" and he has a point in that they'd be risking hypothermia, even with his trademark big black coat on, going from the steaming hot room into the Glaswegian night.

The encore starts with Cavalcade, following a modest and heartfelt thank you to the fans for supporting them, and things come crashing to a halt. The crowd simply break out into another set of READERS chants whilst they compose themselves and start again. They finish as has been tradition on this round of shows with the one-two punch combination of Forever In Your Debt and I Saw A Ghost. Much to the chagrin of the security, with no reason really, Aaron tells us to bounce together and comes down onto the barrier and leans over the front rows arms outstretched singing the former. The latter feels like a communal celebration too, despite the dark subject matter of the song, and a connection that every one of their songs, new or old seem to make between band and audience.

The way the band have grown from where they were when this song was first aired in 2013 to where they are now is frankly astonishing. Whilst the potential was always there, we're not sure anyone ever thought this would ever happen, despite the obvious undeniable quality of the music. 2018 is going to be the year that everyone knows who The Slow Readers Club are. And it's going to be magical.

The Slow Readers Club played Fool For Your Philosophy, Sirens, Start Again, Grace Of God, Not The Only One, One More Minute, Feet On Fire, Through The Shadows, Plant The Seed, Lost Boys, Block Out The Sun, Lunatic, You Opened Up My Heart, Know The Day Will Come, Cavalcade, Forever In Your Debt and I Saw A Ghost.