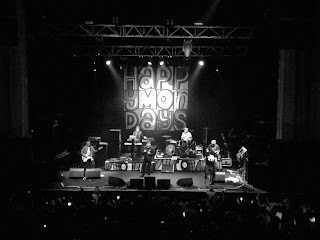 Rounding off their tour in Glasgow, a rejuvenated Happy Mondays bring the house down. Stuart Ralston headed down to the O2 Academy to catch the last night of Happy Mondays' 30th celebrations.

A near two month tour seems a daunting proposition for most bands but not the on-form Happy Mondays. Having started the tour in Dundee in early November, they've toured the length and breadth of the country and popped over to Dublin too. Having been mightily impressed by the opening night of the tour, I thought I'd catch them again. As before, they were spectacular.

The Academy is far from the best venue in Glasgow but once DJ John da Silva has warmed the place up, the crowd are in fine spirits. The Mondays rattle through a Pills N Thrills set mixed with their biggest floor fillers. Opening with Lose Fit and Kinky Afro, Shaun and Rowetta are in fine voice. Rowetta could sing anything and is easily one of the best vocalists of our generation. They've never been better on Bob’s Your Uncle. She pops in and out of the set as required, and when she is on stage she has a massive vocal presence - a key player in the Mondays. They all are to be fair.

Whilst they could easily become a nostalgia act, there is a real sense of purpose from the band. As ever, Paul Ryder knocks out mean bass lines whilst over at the other side of the stage Mark Day adds the sweetest of riffs and looks like he's having a ball all night. At the back, Gaz Whelan and new keys player Dan create the beat and the groove that the fans love. The set has been slightly trimmed back since the start of the tour. This is a shorter and sharper set. It's a real party with a playlist including the club mix of Hallelujah, Rave On and 24 Hour Party People. Each and every tune is celebrated by the crowd. Bez continues to add to the party vibe, but in short doses now.

Ending with a power charged Step On and the all-time Mondays classic W.F.L., the crowd leave happy. Six months earlier in Glasgow, the Mondays closest contemporaries The Stone Roses played their (probable) last ever gig to a massive, freezing Hampden Park crowd in the middle of summer, just a mile away from tonight's show. Six months on and The Mondays have generated a heaving mass of party people and created an intimate celebration. The Mondays may not attracted such a big an audience as The Roses but they have a loyal, dedicated all-ages fan base. Teenagers through to forty and fifty-somethings partied throughout the show.

Like The Roses, The Mondays are an important part of our musical heritage. They might not have added anything new to their set on this tour, but they have a fantastic back catalogue that they could easily have played an entirely different set and still sent fans home happy. Their tunes are timeless and we hope to see more from them next year.