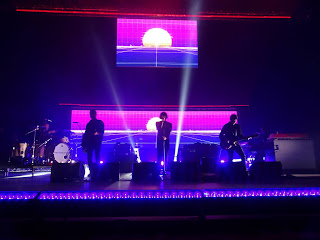 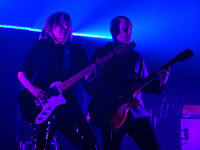 The Charlatans returned to their spiritual home of Manchester on Saturday night for a celebratory show at the Apollo. Whilst pleasing the crowd with a selection of their biggest hits, they also sought to challenge a beer-fuelled audience at times with lesser known tracks from their recent album Different Days. Support came from the evergreen and ever-energetic Brix & The Extricated and the devil-may-care attitude of brilliant newcomers Average Sex.

Average Sex are a whole load more fun than their name would suggest. Fabulously playful, Laetitia insisting on telling us the band's name at the end of every song and trolling the men in the crowd by playing on the name. Their songs are part playful part deadly serious. On the title track of their superb debut EP Ice Cream, she coos "your face is like a big ice cream, I want to lick it before it melts" with a wicked smile on her face that tells you she both means it and that she's toying with you too. Their songs are short sharp bursts of energy, Hey Boy is delivered with a knowing wink as Laetitia denies being crazy despite slashing tyres and burning dogs, whilst You Suck is a vitriolic rant at a cheating ex.

The band are interesting to observe, from Louise's almost indifferent cool to the boys' more geek-chic look, but they gel fabulously together over the half hour of their set. Ice Cream has hints of Tiffany's Radio Romance playing in the background, but it feels like that's just a nod to a real range of influences that come together to form something that's cheeky, seductive yet also more rock and roll that bands that want to be so and follow the text book. Average Sex might have their tongues firmly planted in their cheek half the time, but they're a thrilling, exciting rock and roll band that stand out from the crowd like so few dare to do. 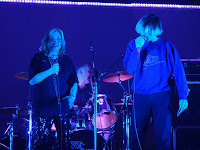 Brix & The Extricated are loud and bassy yet belie the years that Brix and her band have been in this game in one form or another. Moonrise Kingdom is a dreamy soundscape with a hard edge to it and Brix makes sure we know she's meaning this still with an impassioned vocal that feels like she's living every single word of these songs. Her band are old hands at this game and know exactly what to give her to allow her to take centre stage. US 80s-90s and Pneumatic Violet are delivered with a power and passion and a purpose that simply makes you stop and listen.

The set finishes with Tim Burgess wandering on stage and them delivering a duet of The Fall classic Totally Wired. It's a nice moment with which to conclude the set, but what it also does is show us that Brix is still making great music, relevant, vibrant and as always full of a passion and intensity that comes straight from the heart, something that the filling room recognises. 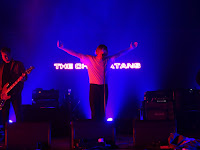 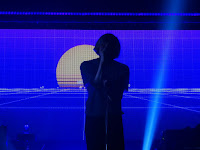 The anticipation is palpable in the now heaving Apollo, more tightly packed in than it has been for a long time, as the intro music comes to a halt and the band make their way to the stage. It feels like something's not quite right as Tim works the crowd not by word but by his now trademark featherweight boxer fists in the air pumping address.

After a minute or so and some discussion they start up Just When You're Thinking Things Over. As it finishes it's clear the technical issues haven't been resolved and after some discussion they decide to leave the stage whilst it's fixed. For some bands this could kill the mood that's built up, but it'd take a lot to do that here tonight.

The Charlatans though don't take the easy option of simply running through their hit singles and the token new song. They're as proud of their last two records as they are of what made them their name in the 1990s despite an audience baying in the main for those big anthems that they know and love. That means that for every Weirdo, One To Another and North Country Boy, there's an Emilie, Senses, Spinning Out and Hey Sunrise. It's a brave move that threatens to lose some of those around us mid-set who've been out all day, but they manage to negotiate that particular tightrope and So Oh, Talking In Tones and Plastic Machinery can still delight the hardcore down the front who don't seem to stop moving from start to finish.

They're savvy enough though to know that you can experiment if you also give the crowd a little of what they want towards the end. So as the evening draws to a close with Tellin' Stories, Come Home Baby, Love Is The Key, Over Rising, The Only One I Know and Let The Good Times Be Never Ending, there's a genuine celebratory atmosphere and a heaving mass that extends back well past the mixing desk as the party mood of the crowd (and there's some exceptionally pissed people here) is sated and friends hug each other and bellow the songs back to each other.

A lot of the appeal of The Charlatans is down to the infectious engaging indefatigable personality of their front man, but this is a band in the truest sense, the songs don't just hang on the words and actions of one man, but the close-knit togetherness of a band that's been through the wringer over the years, something the closing video of Sproston Green poignantly reminds us of as images of Jon Brookes and Rob Collins appear on the big screen at the back of the stage. As if to underline the point, there's two special guests - Stephen Morris from New Order on a second set of drums and Donald Johnson of A Certain Ratio on bongos - for the aforementioned Sproston Green and Different Days' Over Again that precedes it.

As the final bars of Sproston Green echo around the room and the roar is deafening, it's worth remembering that it's a victory that this band still exists. That they can still pack out a venue of this size and refuse to play by the standard rules of engagement that many of their contemporaries, with a few honourable exceptions, adhere to is a success in itself and testament to the restless creative wandering spirit of the band that's kept them going through the hardest of times. They'll always be known for those big hit singles of the 1990s and they'll never turn their back on them but they'll insist on playing them on their terms.

photos by Bev De Friend - no reproduction with permission

Email ThisBlogThis!Share to TwitterShare to FacebookShare to Pinterest
Labels: Average Sex, Brix & The Extricated, The Charlatans