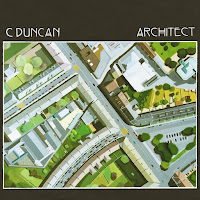 Architect is a remarkable record in many ways. Firstly, if you weren't told, you wouldn't believe that it was recorded in a Glasgow bedroom, With that in mind, you listen to it and revel in its meticulous construction and delivery and marvel at its singular sense of purpose and direction. Every note and every word feel like they're there for a reason, and at no point does anything ever feel superfluous or overdone.

Take Silence For Air for example, a shuffling electronic beat with harmonies drifting just under the surface, waiting for their time through the verse before lifting themselves into the forefront of the song for a while before returning.  There's two differing vocals fighting for space at the start of For, but rather than dueling, they're oddly complementary.

He Believes In Miracles is a monologue told in a number of vocal styles, again with lovingly layered harmonies giving the whole thing a comforting lift.  Garden feels like a pop version of more recent Radiohead work recorded in a bedroom – a song that never stands still in one place, devoid of traditional song structures, insistent backing vocals and an album's worth of idea, some fully-formed, some still sketchy, all bundled up in four minutes.

Here To There is a journey song, and there's a restless feel to a lot of the lyrics on the album, an undercurrent of wistful yearning that permeates not just the words such as the talk of “floating on air” and returning to where they started from on the penultimate As Sleeping Stones, and the positive uplifting intonation of the vocals, but the music as well. The predilection for using layered vocal harmonies is apparent throughout, but rather than being cloying or irritating repeatedly lifts the songs to the point where you could imagine a huge string section being needed to replicate the impact.

It finishes with a beautiful denouement, An achingly simple I'll Be Gone By Winter is intentionally the least ambitious track in its scale on the record, but it doesn’t need to be such is the emotional impact it has, a pre-emptive tale of saying goodbye to loved ones

Architect doesn't try and drown the listener with a massive range of styles and effects. It knows the limitations imposed on it by its creative process and surroundings, but it places no limits on the ideas that are explored throughout. It's a big record made with limited means and it's all the more wonderful for that. It will be interesting to see where he goes next – whether this is a flickering bedroom obsession that’ll run its course or whether the ideas explored here are simply a precursor to something truly ground-breaking and sonicly challenging. Either way, Architect is an utterly fascinating addictive listen that reveals more with each play. One of the albums of the year without question.