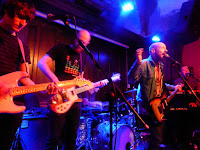 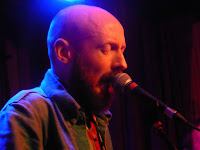 Formed out of the ashes of The Minx and featuring three of them, Heavy On The Magic played their first gig last night at The Castle in Manchester. We went along to check out what Chris Haddon and his cohorts had been up to and were treated to a set that felt both familiar but also pointing towards a new exciting direction.

With just one song to go off, the short sharp bittersweet burst of Val Doonican Express, we approached The Castle with a curiosity to hear the new ideas Chris has been talking about excitedly on social media. Other than him we didn't know the line-up of the band and it was welcoming to see both bass player Steve and keyboard player Kieran from The Minx up there on stage. Whilst there's no such pleasantries as introductions and little information on line we can't report the names of the drummer and the guitarist.

They start off with the aforementioned Val Doonican Express and, like The Minx, there's a boundless energy to the live show. Chris jumping around like a demented jack-in-a-box and it's a mean feat he doesn't floor someone in the cramped space up on the stage. The song, like Chris, never stands still, and this is a trait that runs throughout the set. Money To Be Made, The Bug and Pool Etiquette all weigh in at three minutes or less, but rather be gone in the blink of an eye, they leave a lasting impression by dispensing of any fuss and going straight for the jugular - if the drums don't batter you into submission, the twin guitars or the bass hooks will get you.  Chris takes lead vocals, but Kieran's backing vocals add a more melodic slant in parts. 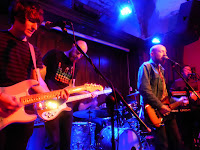 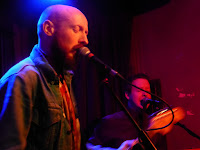 Whilst those first four songs bear all the hallmarks on The Minx, there's something different in the last three songs. Chris is quite a charismatic unique front man so it's impossible to avoid comparison completely, but starting with the fabulously titled Weed Smokin' Hipsters Gonna Rule The World we're left with a feeling that this could develop into something bigger. Coupled with a tune that has ambitions to fill bigger rooms than this, that title becomes a great potential singalong chorus with which they could end a gig.

Ever engaging, Chris chats between songs before being told off by his mother for swearing at one point. The next song Sinkin' Thinkin' takes the foot off the gas a little and features more vocal input from Kieran and demonstrates that there's far more to them than three minute hit and run punk-styled moments.  But they save the best for last. We've read the set list on the stage and rather be disappointed that The Can Can isn't a bizarre cover, we're enchanted by a song that feels like a cross between REM's It's The End Of The World and the more melodic side of The Minx. As it scurries away to its drum-heavy conclusion, we're both comforted by the familiarity of what we're hearing but excited about the journey to new places that's started off tonight.

Heavy On The Magic can be found on Facebook and Twitter. You can also get a free download of their cover of Devo's Gut Feeling by signing up to their mailing list.  They play a headline show of their own at The Castle on August 21 and play Ramsbottom Festival in September.