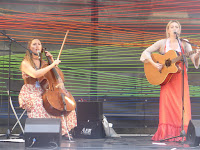 Although there's very little Mancunian about the headline attractions at this year's Manchester International Festival, there's one small corner of Albert Square that is showcasing some unique talent from the city. Even The Stars went along to catch our old friend Little Sparrow perform two sets on Saturday afternoon.

One of the great things about watching Little Sparrow live is the range and versatility of musicians she plays with. We've seen her play solo sets and we've seen her with six in the band and with a range of musical collaborators. One of our favourite combinations though is when it's just her and cellist Sarah Dale. Their two voices interact perfectly together, working in harmony in parts and almost dueling in others. The fragile delicate nature of some of the songs is perfect too for the drama that the cello creates or the lilting, consoling feeling that it generates in the more intimate moments of the set.

The set is split in two on request of the organisers and rather than play a set interspersed with covers as is often the case at such events, Katie (aka Little Sparrow) plays the whole of her debut album Wishing Tree in full as well as Memories Maid, the b-side to the Struck Gold single. Whilst there's issues at times with amplification, it allows an appreciative audience to reacquaint themselves with the beautiful simplicity of the songs or, for the majority, to discover one of the many hidden talents of the city that are showcasing themselves on this stage (see also Sobi, Lucy And The Caterpillar, Charlie Cooper and Josephine amongst others). 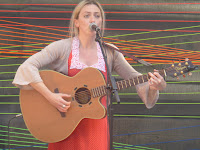 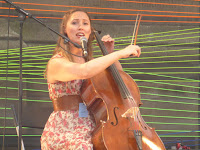 Like the album, the set shows off the whole range of Katie's repetoire. There's the strange tales of an attic talking to its inhabitant that is Polly or the bear that falls in love with a human that is The Hunted. Yet there's also the more straight-forward unadultered love songs that are By My Side and Struck Gold or the will-they won't they dramatics of Sending The Message, where the vocal interplay between Katie and Sarah is at its most impactful. The beauty of these songs is that they can work in so many of the different band set-ups yet here they are at their starkest, clearest and most direct and, when it's turned up loud enough, it envelops the audience that are sat waiting to be entranced and enlightened. Katie's operatically trained voice makes people stop their conversations and listen.

Katie's her usually ebullient self, chatting away between songs in her very non-Mancunian accent and engaging with Sarah as well. It's over two years now that these two have performed together and there's an instinctive chemistry both in their playing and singing as well as the between-song chatting. The two voices are perfectly attuned to these songs - Wishing Tree, soon to be released a single, is a brilliant three minute bundle of fun that's perfect radio material and here that interaction both in the vocals and the impact of the cello win over the appreciative crowd before she finishes with a dreamy The Swallow Flies, a beautifully simple yet powerfully poignant performance of the final track on the album.

Little Sparrow plays Acoustic Amnesty at Salford Trinity Church this Thursday (16th) as well as another set in Albert Square on Friday (17th) at 5.30pm.