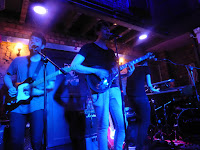 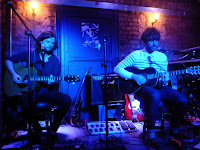 It's been a long time since we last saw Embers. This is only their second gig in at least twelve months and their first of the year. We feared the worst for them, but we're delighted to report they're back armed with a set of big big songs and, of course, some of the marauding epic anthems that made us fall in love with them in the first place. Support came from an acoustic set by Lucky T Jackson.

Playing as a duo tonight, Josh and Paul from Lucky T Jackson open up tonight's proceedings with a short twenty-minute set. They're a band we've heard much about, but our paths hadn't crossed until this point, but on the basis of tonight we will definitely be looking out for them. Their songs sound beautiful stripped back with subtle hints of country and blues. The likes of Make It Up To You, Catch Your Breath, Echoes In The Air and their set-closer That Particular Girl seduce you with a warmth and depth that's often missing in acoustic performances. They also put their own spin on the Elvis standard Don't Be Cruel after explaining that they get their name from the character he plays in the movie Viva Las Vegas. We're impressed particularly as this is apparently their first acoustic gig and can't wait to see them perform as a full band. 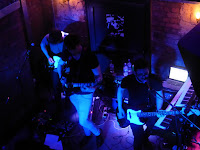 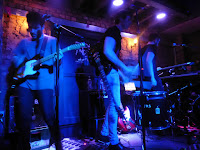 Embers are a band that mean business. A converted terrace house in Salford isn't really big enough to home the ambition and reach of their songs. Although they're not psych by any stretch of the imagination, they wrap their arms around the disparate strands of everything that gets labelled with that catch-all phrase and turn into something powerful, something that dares to turn itself up as loud as it can yet without losing any of the intimacy, intricacy and melody that lie bubbling just beneath the surface. Take their Part Of The Echoes single as an example - for sheer scale it's a phenomenally ambitious song yet once that they deliver without seemingly breaking into a sweat.

There's plenty more of that too. We're unsure as to where the wheels came off for them last year but it wasn't creatively as the new songs such as Digital Rust, After Dark and Adrift that they reveal tonight share that same sense of purpose, the ability to uplift and astound the listener that those early songs that grabbed our attention did way back when. You watch them perform and they mean it, like they're exorcising demons through the means of song, whether it be the hyperactive guitar Steven or the pummeling pounding drums of Nathan that propel songs forward and skywards.

We get just the nine songs in an hour set. The magnificent Sins Unknown and Hollow Cage have lost none of the raw energy that bowled us over when they burst onto the scene. If we had to draw comparisons we'd probably go for Ride as both bands appreciate the power of switching everything up and blowing the listener away yet also being capable of lifting them off their feet with moments of genuine melodic beauty in between blasts.

We're happy to report that Embers are back, let's hope they don't leave us again any time soon.