Track Of The Day : Hidden Charms - Dreaming Of Another Girl 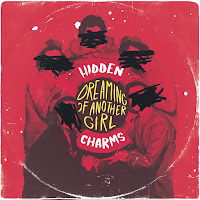 Dreaming Of Another Girl is the debut single by London four-piece Hidden Charms. They've already created a growing buzz with their live shows and the single is certain to embed them in many of next year's tip lists.

It's released on legendary Liverpool label Deltasonic and is produced by Shel Talmy, whose previous work has included The Kinks' You Really Got Me and The Who's My Generation.

The song itself manages the mean trick of wearing their influences on its sleeve, but whilst also sounding contemporary and far more than a mere rehash of them. Like Blossoms there's a timeless feel to the song that should see it appeal to both young and old and those of us in the middle.

They're about to embark on a series of dates around the UK :