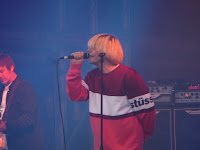 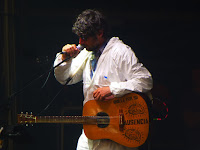 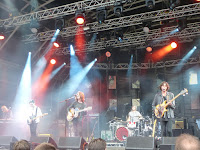 The Charlatans aren't from Manchester, yet this is regarded as a hometown gig and as the sun goes down and they move from one hit single to the next a sea of arms raised aloft across the Castlefield Bowl prove Ian Brown's oft-quoted line "It's not where you're from, it's where you're at" as they continue their remarkable resurrection on the back of this year's stunning Modern Nature album. Support comes from Super Furry Animals and Blossoms. 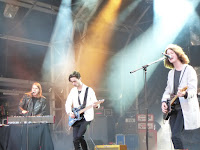 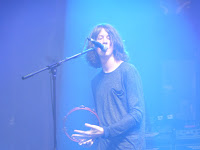 It's roughly a year to the day since Blossoms first took to this stage at last year's Summer In The City and it's remarkable how much they've grown in that time. They're now armed with a cocksure fire and confidence that makes them feel at home on this sort of stage. Their sound fills the bowl and it feels like they belong here. And with songs like Cut Me And I'll Bleed, Blown Rose and the set-closing Blow as well as recently added new ones On The Beach At Night and Charlemagne, the world is theirs for the taking. 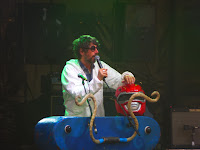 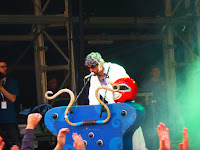 Next up are Super Furry Animals who start their set dressed in white jumpsuits and who end it by leaving the stage in the middle of The Man Don't Give A Fuck and coming back dressed as some kind of hairy creature. Add to that Gruff's penchant for communicating to the audience by holding up big signs telling us when to applaud or thanking us at the end and it's all a little bit surreal. 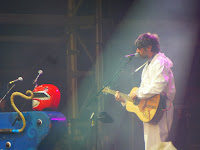 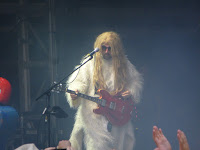 Fortunately, it's also brilliant. The aforementioned The Man Don't.. is an expletive laden crowdpleaser but it's the likes of Juxtaposed With U or Rings Around The World from the start of the century that show them off as masters of merging together various strands and influences into something that's beautifully melodic that's perfect for a warm summer's evening. They flit around their impressive back catalogue for Mountain People off their debut or Hello Sunshine, but each song works perfectly and the crowd love them.

It's time then for the headliner and they come on to the sound of Anthony H Wilson introducing them from a 1990 Granada live TV broadcast and then the Coronation Street theme tune and Tim Burgess leads us in a communal singalong, arms waving, of that most Mancunian of pieces of music. 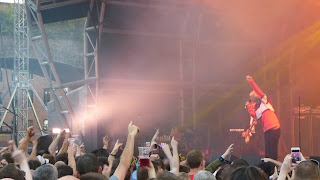 What then follows is a demonstration of how far away from that Madchester movement they moved. It was a touchpoint for the likes of them, James and Inspiral Carpets rather than their defining point as it was for the likes of Roses and Mondays. The Only One I Know and Then are of course present and correct tonight, but it's the list of real big hitters - Just When You're Thinking Things Over, One To Another, How High, Can't Get Out Of Bed, North Country Boy et al - that mark them down as one of the finest singles bands of the last three decades.  Their set recognises this - everything is pretty much a single other than the new songs - and rightly so, as this feels like a celebration of a band still being here against all the odds having lost two members in tragic circumstances. By the end everyone in the bowl is up on their feet dancing and singing along.

The new material more than holds its own too. The selection of tracks off Modern Nature is cleverly done as well - they go for the ones like Talking In Tones, So Oh and Let The Good Times Be Never Ending - sound like the big Charlatans hits of the past, but brought right up to date with an unflinching sense of purpose and belief running right through each of the songs they play. 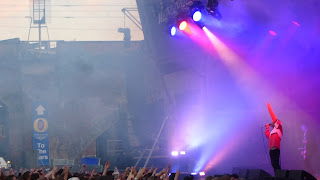 Tim Burgess is a brilliant front man. You feel that if he wasn't up there singing, he'd be in the front row, dancing along and singing with the rest of us. His boyish impish charm, which he still possesses after all these years and all the trials and tribulations and tears, shines through and it's impossible not to warm to him.

They're joined at the end for the one-song encore of Sproston Green by Dexy's Midnight Runners' brass section as well as Stephen and Gillian from New Order. As the keyboards take the song off into the stratosphere, the song feels as relevant and appropriate now as it did a quarter of a century ago.  It's their anthem, their calling card, a song that defines them as much as any of their impressive array of big singles that people sing along to throughout tonight. 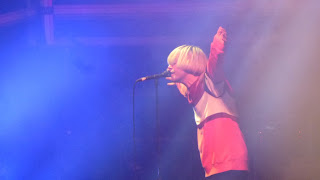 The Charlatans might not have the kudos, street-cred or the mystique of the Roses, but to the crowd in the bowl tonight, they are for that moment in time the most important band in the world. They touch and connect on every level with every single song of a brilliantly planned and executed set that's perfect for the time, the place and the people.