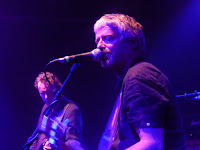 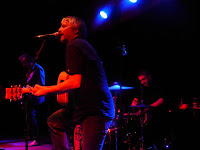 There’s a very special relationship between I Am Kloot front man John Bramwell and Hebden Bridge Trades Club, probably the best small venue in the country. His solo shows are the stuff of legend and one of those was captured for immortality on his Live At The Trades album. Tonight, he’s here with his band as a one-off show around their summer festival season.

In a way there’s a lot of parallels between this venue and the band. Dark, warm, welcoming and part of an alternative culture that’s celebrated by those in the know, you feel that both are a little overwhelmed when adulation is thrown their way as they’re happy being who and what they are and compromise is a dirty word.

For Kloot, this year has been about resetting the band’s boundaries, of going back to the land, to the raw, John uses the word punchy tonight and it’s an appropriate metaphor. When they play To The Brink, from the Sky At Night album, John tells us they don’t have an accordion player and that we, the mob, can play that part for a small reward and we do and it feels like there’s some form of spiritual union occurring, as it does again later as we bellow out the refrain from Northern Skies. 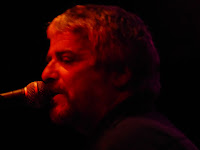 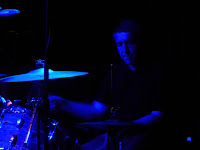 In between that though, we go on a journey through Kloot’s back catalogue, plenty of tales of “drinking and disaster”, explorations of love and loss, self-doubt and mild schizophrenia yet which have a weird uplifting, optimistic yet realistic undercurrent to them. Songs like The Same Deep Water As Me, Because, Ferris Wheels, Storm Warning – the list could go on and on - are so poignant because there’s something in there that people can relate to and you know that Bramwell has lived every moment of these songs in his conscious or sub-conscious. There’s self-depreciation, open and honest assessments of male weaknesses (Storm Warning, Dead Man’s Cigarettes) - it’s a man wearing his heart on his sleeve for all to see.

The magic of I Am Kloot though is in the interplay between the three of them. The songs are powerful enough to work in a solo acoustic setting (as John demonstrates starting the encore with an unplanned rarity Not A Reasonable Man) or with the expanded line-up of recent years, but there’s something quite unique that defies definition or imitation when the three of them get together. You can see why the likes of The Libertines, who are huge vociferous fans of the band, cite the bare-boned catharsis as one of their major influences. It’s born of the raw, vicious chemistry of Pete Jobson’s bass lines that are often unrecognisable as such due to his ability to wring sounds of it that lesser players could only dream of and Andy Hargreaves’ drums and percussion which move from rumbustiously driving along the likes of One Man Brawl and Over My Shoulder to providing seductive soft edges to Because and This House Is Haunted as well as Bramwell’s guitar and that world-weary voice powered by decades of hard and heavy living and loving. 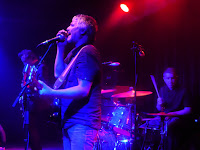 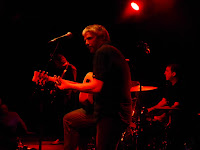 The venue plays its part too. The crowd, just a couple of hundred of lucky souls, are mostly receptive to everything on offer which is heavily weighted away from their most successful last two albums. The sound, as ever here, is spot on, crisp and clear helping to accentuate the light and shade of the songs and the lights are simple but extremely effective, the only issue being a smoke machine bellowing out at times, never reaching the stage, but threatening to asphyxiate the middle few rows.

You feel that if the Trades Club had a house band then I Am Kloot would be that band. There’s a lot of love from band to venue and it’s reciprocated. John jokes about the local rivalry between the town and Heptonstall village that overlooks it, that they don't turn the mirrorball on in the venue in case "it wears out" and praises the crowd for their knowledge of the songs whilst playfully mocking middle England crowds that don’t get them.

The evening comes to an end with two hundred and one drunken souls cavorting their way through a communal slightly ramshackle Proof at the end of a near two hour set and it genuinely feels like we’ve all come together as one in a mutual bonding session to drown our sorrows and exorcise all those worries, concerns and woes that most of us experience to the musical soundtrack of the three men up on stage in front of us. And that’s the ultimate power of I Am Kloot.

I Am Kloot played One Man Brawl, Cuckoo, Life In A Day, This House Is Haunted, Gods And Monsters, The Same Deep Water As Me, Dead Man’s Cigarettes, Someone Like You, Masquerade, No Fear Of Falling, Fingerprints, Over My Shoulder, To The Brink, 86 TVs, Storm Warning, Here For The World, A Strange Arrangement Of Colour, Ferris Wheels, Because, Dark Star, Strange Without You, To You, Northern Skies, From Your Favourite Sky, Not A Reasonable Man, Twist and Proof