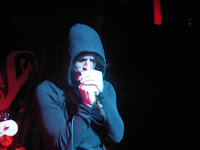 The Blackrays may be relatively new players on the psyche scene, but on the basis of the show we witnessed at the Night And Day at the weekend, they're one of the more forward thinking, sonically challenging bands around. They create dark, threatening, metallic waves of sound that both pummel the listener, but also have a warmth and depth to them that's both exciting and fascinating, leaving you wondering what's coming next.

They open up with a brooding, building number without front man Rhys Bloodjoy on stage and when he does he's donning a hoodie that covers most of his face for large parts of the set, but The Blackrays aren't about visuals although when Rhys lets go, it's as if he's been possessed by musical demons that his band mates have spirited into the room. From behind the hoodie, comes half-sung, half-shouted, often indecipherable words as the cacophony of noise envelops him and all of thus close to the stage as the effects on his vocals blur and distort intentionally. 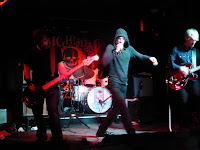 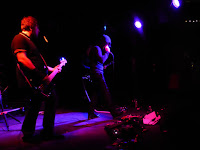 But The Blackrays are about more than noise, there's shards of melody poking through, a persistent, insistent driving sense of purpose that comes from drummer Oliver's thrusting, dynamic rhythm whilst bassist JP and guitarist David are almost oblivious to the antics of their front man. At times they sound like a heavy metal band, all big posturing build up and then letting loose wildly but always in complete control. Single Here They Come is frantic, scattering its musical seed far and wide as it bowls its way from one sector to another on its journey.

This could all be a hideous mess, but they hold everything together taut, always on the edge of potential breakdown, waiting to collapse under the sheer weight of their ambition, but their control means that the fall never comes and the audience leave exhilarated, beaten and breathless. In a scene that's got so many bands making great music, The Blackrays are pushing the needle a bit further, spreading their net a little wider and creating something that's both disturbing yet unnervingly addictive.

Email ThisBlogThis!Share to TwitterShare to FacebookShare to Pinterest
Labels: The Blackrays