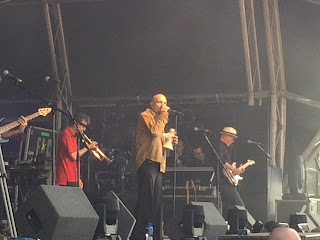 As part of their summer festival season, James played a slot second on the bill at the Splendour Festival in the picturesque setting of Wollaton Deer Park on the outskirts of Nottingham. On a sun-baked day, they mixed some of their best-known hits with tracks from their most recent La Petite Mort album.

The line-up at Splendour Festival is an interesting mix - before James and The Specials come to the stage they're preceded by boy-band Lawson, who put on an entertaining show and get a great reception even though it's not really our thing, and the impossibly enthusiastic Indiana and her surprisingly catchy take on electro-pop. The festival setting is beautiful, set at the bottom of a long hill with the impressive Wollaton Hall towering over it and the weather is perfect for a day out in the sun in the fields with well-run and well-managed bars serving liquid refreshment.

As is often the case with festivals this isn't a James crowd despite the smattering of daisy t-shirts and the odd terrible piece of fake merchandise that eBay seems to have spawned. When Tim goes down to the barrier during Come Home and looks to go surfing across the crowd he almost comes a cropper as people aren't quite sure how to react to him. He doesn't make the mistake of trying it again later.

They start with Sound, still an interesting choice to open a set to an audience of this make-up despite it being one of their top ten hits. But as Andy's trumpet calling card pierces through the heat haze and, for once, the festival sound is pretty much spot on, it turns out to be a smart choice as it mixes familiarity with their natural instinct to play with their songs, to play them slightly different and to challenge their audience. Tim tells us that they haven't been playing the next song much but it's now back in the setlist. It's no surprise when Larry's 1-2-3-4 countdown crashes into Sit Down and the whole place up and down the hill are joined together in a form of communion. They don't mess with it, try and stretch it out and it's quite a rough, raw and ready version and is all the better for it. Rather than an albatross around their necks, it can be something of a celebration if it's used right.

Curse Curse, the first song of four they play from La Petite Mort, is next and like the others they play later, it more than holds its own in what's more familiar company for large sections of the crowd. Mark's electro-wizardry drives the songs along, Tim loses himself in dance and the audience join him. Gone Baby Gone is raw and dirty, jagged guitar and bass lines merging into keyboards that make the song feel constantly on the edge of breakdown, thrillingly raw and vibrant and probably a world away from what those reacquainting themselves with the band or watching them for the first time would expect. 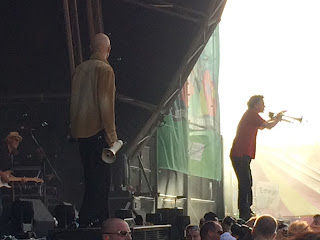 Come Home is obviously more familiar and, with Mark once again high up in the sound, something that's been a feature of the live shows in the past couple of years, it gets the crowd moving and singing along, either reliving their youth or discovering that these old men can still mix it with bands half their age. Tim talks about testing the audience's listening abilities by playing something other than nostalgia as they take things down for five minutes with a beautiful Out To Get You. It's a song that rarely fails to hit the mark and its quiet beautiful aching melody has a gorgeous calming impact as it rolls up the hill and back down again and Tim and Larry duel with vocals as Saul picks up his violin .

Conscious that time is catching up on them yet insistent on showcasing La Petite Mort, they have a very public discussion of what they play next, fixing on a shortened version of Interrogation. As they set up, Tim tells us he saw The Specials when they were The Coventry Specials supporting The Clash.  Interrogation, with its pumping pummelling drumbeat shot across with shards of trumpet, is something of a triumph, tight, fierce and intense and never gets lost in the expanse of the field. Moving On is next up and Tim explains the story behind it (the death of his mother and a close friend) yet the song has the opposite impact to the events that inspired it with its big, bold strident verse moving in an instinctive singalong chorus, proof of James' enduring ability to produce killer singles.

They finish with Laid and Sometimes. The former starts with an almost acapella first verse with just a slightly wonky acoustic guitar which gets the crowd to start singing it with Tim before the rest of the band crash their way into proceedings and pockets of the audience throwing themselves around to it. It's a perfect festival song and today it has a vitality, an energy and vibrancy that lights up an audience that's basking in the un-British summer weather. There's no attempt at extending Sometimes out into a singalong ending, probably wisely given the make-up of the crowd, but that imbues it with a frantic, scurrying urgency that occasionally gets lost as it gets transformed into a celebration.

Plenty of James fans queried why they were supporting The Specials rather than the other way round. We didn't hang around as we had friends to catch up with over a chicken vindaloo, but what was clear was that Splendour wasn't your traditional music festival - it had a quite brave eclectic and often contradictory mix of bands with something for almost everyone (the second stage was topped by Bananarama and The Twang - quite a contrast there). James came and reminded people of their past, but hopefully also surprised people who'd lost touch with them with their present with the four songs from La Petite Mort.

James played Sound, Sit Down, Curse Curse, Gone Baby Gone, Come Home, Out To Get You, Interrogation, Moving On, Laid and Sometimes.