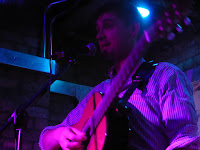 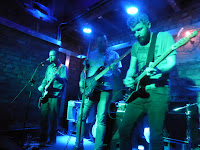 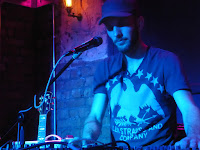 Having had the delightful pleasure of discovering C Duncan's debut album Architect we were eagerly anticipating his first show in Manchester in the intimate surroundings of the Eagle Inn. With another eighty people crammed in, we were intrigued to see whether Chris and his band could transform the layered bedroom recordings of the album into the live environment. We were not disappointed.

Opening up the evening is Paul Bytheway (his real name as he tells us half way through his set) and we're faced with a huge table with assorted gadgetry between us and him. He's very softly spoken and we fear the worse as one of our party had been less than complimentary about the tracks he'd heard, but, we're glad to say he was wrong. The mix of using a wide range of vocals, guitar, keyboard and electronic loops works really well and with judicious use of the technology he creates something that's interesting enough and varied enough to keep the listener's attention, something that's often difficult in this venue.

He doesn't try to over-complicate although on his final track with a one-man 808 State style intro he hints at something more experimental. He's genuinely endearing throughout such as when he tells of a song Love Is A Word that he used to propose to his wife-to-be and he creates a fascinating juxtaposition between his reserved personality and the fact he's up there on his own creating all of this without the aid of others. 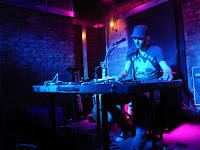 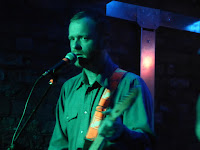 Next up are False Nines and this is only their fourth-ever gig. They're a four-piece with the traditional two guitars, bass and drums line up and therefore to stand out they have to impress and make their mark from the raft of similar all-male bands that are on the circuit, which is difficult when you're still so early in your career as a band. They are blessed however with a series of songs that show a lot of promise and hints that once they've got over that initial period of bedding in as a live band and getting familiar and comfortable together that something more expansive will come and they can move from simply impressing us with their musicianship and songwriting craft to something that could genuinely thrill us.

There's three songs in particular that catch us and two of them will form their first single release once they've got the mixes finished. Can't Afford To Wonder and Light A Fire both have hooks that grab the attention and hold it and given they've had the focus of studio time to record them, they feel a little more rounded and purposeful than the others do just yet - but it is only gig number four. Be Suspicious and final song Greater Things though suggest that as they develop they'll get more expansive, more ambitious and not be afraid to venture away from the risk of repetition that bands of this make-up often get caught up in. They're one to keep an eye on and an ear out for. 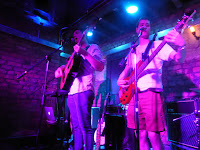 This is Chris' first time in Manchester and throughout he's genuinely in awe of the fact that he's filled this room without every having been here before, but such is the acclaim that his album Architect has gathered in the short couple of weeks since its release (and 6 Music's Stuart Maconie is skulking around the back of the sold-out room) that there's a genuine sense of anticipation that we're witnessing a stepping stone to bigger things even before we've heard a note and know whether he can transform those songs that were recorded in his bedroom into the live environment with other players.

We genuinely need not have worried. The live show perfectly captures the real gamut of emotions, styles, pace and volume of the record - from the fun experimental Garden which closes the set through the more tender moments such as He Believes In Miracles, Say and For that start it off. His band are perfectly attuned to the mood, spirit and intent of the record and are therefore able to faithfully recreate it when it needs to be, but also to develop, enhance and add new shade to it where required. It's the first time he's played with a drummer as well and other than a few parts where the songs are particularly tender when the size of the room can't compensate them being miked up they fit in perfectly. But what makes this all so wonderful is the way his vocal interacts in perfect harmony with that of his guitarist to recreate that beautiful feeling that runs through the album and it allows that intimacy, the warmth and honesty of the record to be transmitted to the room.


Chris plays an impressive fourteen songs including pretty much all of Architect and leaves us with a beautiful completely unplugged I'll Be Gone By Winter for which there's absolute silence in the room, a sign of how he has wooed and captivated the crowd with both his music and his personality. His infectious consistent grin tells us he's slightly shocked and overwhelmed by the reaction he's getting. He'd better get used to playing sold out shows and to much bigger crowds than this though very soon.