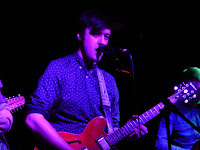 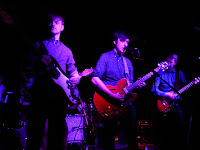 Tonight is Control Of The Going's first ever gig. On the back of their debut EP Epilepsy Bus Ride, we're intrigued to see if they can pass that mandatory litmus test of any band's mettle - whether they can cut it live.  They pass with flying colours.

First song Open Up My Eyes sets the tone for the rest of the set, a persistent forceful drum beat that doesn't try to be too clever but which makes its presence felt throughout around which the bass, guitars and keyboards wrap themselves. With so many people on stage, it feels odd to say that the songs feel understated - that they are built around a ethic that, if you pardon the preposterous pun, has them in total control of where the songs are going. Not for them the traditional verse / chorus / verse / chorus / middle eight / big chorus ending of so many bands, these are sublime and almost delicate pieces of music, elegantly crafted and focused.

As they move into second track, In Line, that formula is still in place, but with a different set of variables. The keyboard, stuck at the back of the stage, makes itself heard as the guitars drop down but the effect is no less impressive.  Reflection, with its chiming, addictive, repetitive guitar riff and that earworm lyric "now that we're older we're wiser" to the fore, is the first song from the Epilepsy Busride EP and it's transformed perfectly into the live environment. 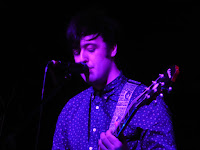 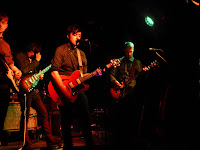 The next two songs - If Only and The Message - make up the trio from the EP and cement that impression that they can transform the studio into venues like this. On the former, Liam sounds like Ian Curtis for one small moment and then the song lifts itself away. He's not the sort of front man who's going to jump around the stage and tell the audience he loves them at the end of every song - but then Control Of The Going are much more about the collective unit than they are about individual personalities.

They save the best for last though. Don't Let The Sun Go Down is a sprawling, threatening epic that bowls you over with the unstoppable momentum of the song. Despite there being six of them up on stage, including three guitarists, they don't try and overwhelm you with noise in a way lesser bands would. There's an intuitive control of volume and pace that they've mastered that works equally well on songs that last three minutes as on those that last more than double that.


As we make it back to the soundboard, we're stopped by a man in a shirt and tie, who assumes we're their manager (we're not), who gushes enthusiastically about them for several minutes. He'd never heard of them before yet alone heard them, but he's overwhelmed by their distinctive sound and the fact that they don't sound like anyone else, but grabbed him immediately. There's your recommendation.