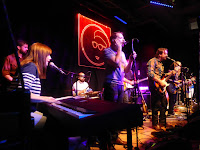 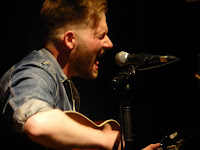 It’s been eight long years since the last The Earlies tour following the release of their second album Enemy Chorus. Defying the logistical problems of the band being based in the US and Manchester, they’ve reformed to record a new album and play a series of dates as a reintroduction to the band.  We went along to the Band On The Wall to watch the eleven (yes, eleven) piece band perform tracks from their two albums and their recent Message From Home EP.

Opening up the evening was a solo set from Even The Stars’ favourite Liam Frost.  He’s playing solo tonight and performs seated. Stripped back of other instrumentation the genuine beauty of the songs shines through and the poetic raconteur in him is emphasised as he tells the tale of family bereavements and emotional and relationship turmoil. The three songs from his recent Wild Places EP – the title track and the closing two songs – whet the appetite for another EP to be released in October as well as the long-promised third album. 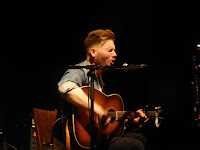 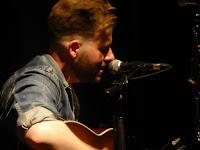 He’s on good form too, playfully teasing one audience member about his cover of Sade’s Ordinary Love being sexy rather than the Is This Love that the gentleman is calling out for and joking about choice of rapper on his t-shirt and jacket. It’s also good to report that the majority of the group gave him the respect his songs deserve and actually listened rather than talking throughout.

It’s one of life and music’s mysteries why Liam Frost isn’t revered in the same way so many lesser songwriters are. The songs from those first two albums, of which we get just a taster tonight, are some of the finest to come from this city this century and demonstrate their quality and versatility by being no less effecting whether performed with a band or solo.

There’s eleven of The Earlies filling the Band On The Wall stage (it’d be worth hanging round The Shacklewell Arms where they play later in the week just to see how they fit everyone and everything in the room) when they make it out. The instrumentation ranges from banks of keyboards, drums, bass, guitar, three lots of brass, a cello, a melodica and a number of things that probably only the maker would know the name of as well as subtle but not overpowering samples and technical wizardry. With so many on stage, and so many talented musicians in their own right, it could be an awful dreadful mess, but such is the chemistry between them that remains undimmed with time that it’s the exact opposite.  Even when it sounds like a mess, a coming together of so many different sounds, it’s a beautiful, glorious, delirious one – much more a collective than a band. 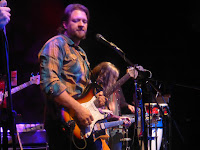 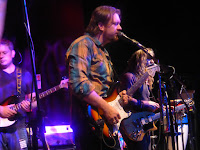 Despite their number they still manage to imbue an intimacy into songs like One Of Us Is Dead giving it a beautiful longing, almost country feel and it’s a pattern that’s repeated throughout. There’s no superfluous instrumentation, no need for everyone to contribute something all the time and this creates a perfect vibe on stage that transmits itself to the audience. There’s a lot of love in the room for what’s going on up on stage and the people up there. As they run through tracks from Here Come The Earlies and Enemy Chorus, people mouth along the words, those down the front lose themselves in shuffling swaying dance moves. As the set builds, the celebratory atmosphere grows with it reaching a crescendo for the encore of Morning Wonder and Dead Birds from that acclaimed debut.

Vocal responsibilities are shared across about half the people on stage, but focus around Brandon and Sara Lowes on keyboard and their two voices blend together as beautifully as the music around them. The others add harmonies and backing vocals to lift the songs even further – again where necessary and always with impact.

It isn’t just about reliving the past though. Defying their geographical constraints, The Earlies are working on new material, as should be written into the contracts of any band reforming. There’s two tracks performed tonight - Abandon and Disappearing Man – and they both demonstrate that the ability to fuse so many ideas and so much ambition into songs hasn’t betrayed them with time. To the untrained ear, you wouldn’t pick them out as new and the crowd love them too.

The Earlies always were a bit of an outsider band in town, their make-up fluid and possibly an inhibitor to greater acclaim and success, but to the people who loved them they were a band that truly mattered. Tonight’s celebratory set reinforced that, reintroduced them and pointed towards more great music and shows to come.

The Earlies played One Of Us Is Dead, Wayward Song, No Love In Your Heart, Bad Is As Bad Does, Abandon, Burn The Liars, Foundation And Earth, When The Wind Blows, Little Trooper, Disappearing Man, Enemy Chorus, Bring It Back Again, The Devil’s Country, Breaking Point, Morning Wonder, Dead Birds