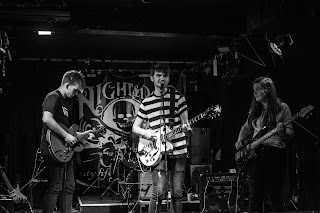 Headlining the Night And Day in Manchester for your second gig is a pretty good start to your career particularly if you haven't even released a track yet. We reported on Lunar's first gig at the end of May and caught them again to see how far they've developed in the interim.

Tonight's set is short and sweet due to the band before over-running and issues with kit, but for a band in the infancy it's a good thing to hit an audience with a short sharp burst and leave them wanting to discover more. And that's what Lunar do. The place isn't packed as a lot of their mates didn't get in, but by the end the reception they get from everyone in the place tells its own tale even though the majority wouldn't have even heard of them before.

Their set features a brief instrumental with the inventive title of Intro and four songs.  The first song Come Home was one of the first they demo and features mostly front man Sam Carson on vocals. It's impressive on its own, but as they move through the set to songs they've written more recently then it's immediately apparent that they're still developing as songwriters as well as a live band. The chemistry on stage is apparent and you can feel that there's an intuition between the four of them there that marks out the wheat from the chaff in bands playing these sorts of venues.

Gonna Get You Down and their newest song Showboater are cases in point. They're not the finished article yet, but they feel fuller, bolder and that the band are starting to gel. They make great use of the interplay between Sam and bass player Christie's vocals. There's a dearth of bands that have both male and female vocalists singing together, but these two songs have much much more to grab us than mere novelty value. They're strong forceful numbers that are delivered with a confidence that belies the fact that this is their second gig and these are the first fruits of them writing together.

We hadn't heard upcoming single Our Way since that first show in May and since then they've been in the studio recording it for their debut single release to coincide with their Sound Control headline set in August and we're struck by how far the song has come. It has a brilliant simple chorus "I don't care what they're saying, but I know that it will go our way" that can say as much or as little as you want it to and you see visions of people singing along to it in big crowds.

Lunar are a band to keep an eye out for. There's a lot more to them than the Gallagher/Turner/Fray aping worship prevalent on the scene at the moment. The male/female vocal interchanges work really well as the two voices are suited to attack choruses together and their songs don't just sound like watered down versions of the great first one they wrote a while back or their heroes. We're sure there will be a lot of growing up, developing, false starts and about turns to come for them, but they're definitely on the right path.