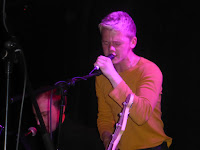 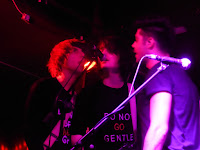 This Feeling's club nights at the Night And Day always deliver a quality contrasting mix of local and national talents and July's was no exception. Headlined by local heroes White Boy, still counting the number of gigs on their fingers and alongside them Welsh heroes Trampolene making a long overdue and welcome return to Manchester as well as Bad Molly who are earning themselves a growing reputation here too, the crowd was treated to three very different yet in their own way exceptional bands. 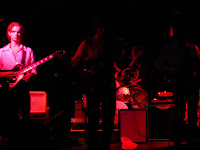 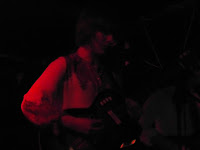 Bad Molly open up proceedings and they've brought down a young and enthusiastic crowd down with them, including one guy who's almost break dancing to them by the end of the set. They describe themselves as psych/rock and they immediately demonstrate a love of big rock moves, loud driving rhythms that lift the audience up.  They start with Come And Go and Silvergold, two songs that they've already revealed on their Soundcloud and whose guitar riffs in particular mark them down as a band that understand their influences and allow them to seep into, but not overpower, their songs. They take a love of the past and fuse it with modern contemporary touch points to create something to win over the crowds as they've been doing steadily all year.

They've got an infectious energy too that rubs off on the crowd. Front man Tyron bounds around the stage like a man possessed, the floor bouncing under his weight, totally engrossed in the sound his band mates are creating and the songs give them the space to do that as many of them stretch towards five minutes, allowing them to expand on their ideas rather than stifling them with traditional song structures. Their big ideas don't always hit the mark mid-set, but that's not unexpected from a band learning their trade and with a very obvious confidence in what they're doing - they play a song they've written today just to underline that and you wouldn't have known had they not told us. More times than not they do though and they succeed in the mission which Tyron tells us is to make sure we have a good night. 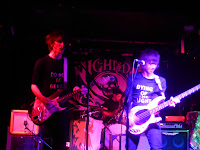 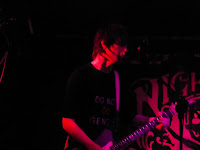 Trampolene are up next, fresh from a six-hour drive from Wales and an impending return straight after the set. We've missed them in Manchester as they've bedded in a new drummer and headlined a residency at Club NME in London. There's nothing quite like them around at the moment, they've got that fiery spirit that the Manics had in their earliest days, an approach that both wants your love and attention, but plays hard to get with it. They start with Artwork Of Youth, a poem around a series of firsts in front man Jack's life - from falling in love, blow jobs and finishing with him being the first to get out of where he came from despite never been the first anywhere else.

That outsider feeling, the desire to triumph against the odds is something that comes through in their set. For a three-piece they make a formidable noise for most of the set, Jack and bass player Wayne prowling the stage menacingly as they blast their way through Alcohol Kiss, Under The Strobe Light and the acerbic My Bourgeoisie Girl.  Interspersed with this are two more poems, one about taking the horse drug Ketamin that's laced with wit and humour and the other a droll comical observation of modern life based around a visit to Poundland.

But then just before the close they play a new song entitled No One's Got A Love Like We've Got, the guitars stop, the three of them huddle round the microphone and sing one of the most beautiful love songs you could ever imagine. There's no saccharine punch to it, it's rough and raw around the edges and it's possibly the shock value of a band that lives on the edge and delivers ferocious blasts of rock coming out with something so emotionally bare that makes it so utterly beautiful. They then of course turn volte face and finish off with a cataclysmic thrash through You Do Nothing To Me.

Trampolene are one of a kind, operating under their own terms, indifferent to and untouched by any need to fit in or conform. They'll rip your head off and then stitch it back on and tender the wound and make you laugh and smile at the same time. 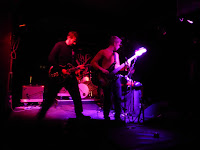 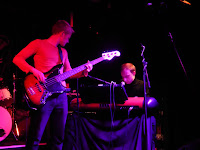 By the time White Boy make it to the stage at 11.30 the Night And Day has filled up with a drunken hen party and people looking for a late night boozer so it's not the most ideal setting for their intense emotive mix of dramatic rock like their cover of David Essex's Rock On or the beautiful achingly romantic widescreen electro-ballad that is album closer Starchild.

Whilst front man Joe has the obvious star quality in the band, immersed and baring his soul in the songs, they are by no means a one man band. Soaring backing vocals, tight drumming, guitars that flourish in the right places and let loose in others, sharp uplifting brass and Jo's bass all add up to a group that sound remarkably fresh and inventive.

Their set focuses on their debut album Glitoris, eight songs in just under half an hour from an album that gets better with every listen revealing a little more each time. These are songs that aren't afraid to nod to their influences, like the very Queen dramatic intro to final song Mama that's enhanced, enriched in the live environment, but without ever feeling like they're trying to ape them. This is heartfelt impassioned modern rock and although it might have been lost on some of the audience by this point, the intensity of their live set alone makes them a must-see band.