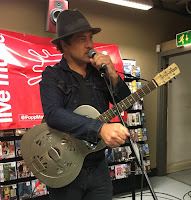 Augustines are one of those bands that grip you the moment you first hear them, then take you on a full on passionate, heart warming, soul finding and often tear jerking roller coaster ride that you either refuse to or can't get off. Glenn Wallworth caught their in-store promotional set at Manchester's Fopp on Monday and shared his thoughts with us on their new album This Is Your Life.

The indie-rockers who were initially formed in New York never stand still and those who have been lucky enough to see them perform live, with testify that they are right up there at the top of the live performers league, with Billy McCarthy their highly energetic and charismatic front man leading the way, backed by Rob Allen on drums and multi-instrumentalist Eric Sanderson.

Having just returned from touring across Europe with Noel Gallagher’s High Flying Birds, the band have just about managed to draw enough breath in order to release their much anticipated third studio album This Is Your Life.

So on Monday afternoon I went along to see Billy perform a mini acoustic promotional set at Fopp store in Manchester, followed by a an album signing with Rob, which Eric was unable to attend due to illness.

They arrived a few minutes later than planned due to a combination of Manchester’s signature rain and heavy traffic congestion, but to their credit the staff at Fopp allowed all fans in attendance to go down into the stores basement early to dry off and get the best vantage point they could in between aisles and aisles of bargain priced CDs, DVDs and other collectable musical items.

Billy duly arrived and broke straight in Are We Alive, the first single taken off the new album. This is already a firm live favourite, as the studio version is full on, doesn’t hold back on any raw power and packs a very hard punch on the eardrums. That said, this is Billy playing it acoustically, he still delivers the same powerful vocals, but works wonders with its transition over to a single guitar, meaning the song loses nothing as a defining album opener.

Next up was Landmine, this song seems to be built up on an acoustic river that flows gently up towards you then spills up over the sides, leaving you drenched in its undoubted brilliance. Billy then threw a short cover version (not sure of the title) into the set, before treating us to the first of his hilarious tales about getting battered and kicked out of a Manchester pub that was holding his own bands after party, this and many other stories throughout the night drip like water off his tongue, his fascinating personal life has had more ups and downs than the nearby Lake District, but these passionate stories are always delivered with such wit and a pleasing sense of humour that is so often missing from the vast majority of today’s society.


Billy then asked the crowd for a few requests and we were given a very, very short clip of Ohio a b-side that the band recorded when they were originally named We Are Augustines, followed by superb acoustic versions of Weary Eyes and The Avenue off the band's self titled second album.

Last but by no means least, Billy broke out into a stunning acapella version of Running In Place, stripping the track down to its bare minimum is an art in itself, but Billy does it with so much ease that it’s hard at times to realise that the drums, guitars, piano and mesmeric haunting gospel style backing vocals are actually defunct on this amazing live version.

Well that’s about it as far the live set went, as Billy was joined by Rob and the pair then spent what seemed like an age, signing copies of the album, posing for photographs and freely chatting away to fans that mean as much to the band, as the band mean to their growing army of fans. The pair then made their way straight to Nottingham to continue their promotional tour, before they kick off the summer with a full set of European and USA dates that finally end in Liverpool on Monday 31st October.

As for the album itself, it’s definitely another upward step in the right direction for a band aiming to rise to the top, to some fans of the bands early work it might lack a little bit of the rough edge that most bands seem to possess when starting out, however if you hang on in there and let the album play to you rather than at you, you’ll soon discover that the newer synthesizer, string, brass and piano parts serve great purpose to many of the tunes and add to what is already a classic mix of whirling guitars, perfect percussion and volcanic memorising vocals.

Kicking off with the howling anthem that is Are We Alive, we are then taken to the synthesizer laden beats of When Things Fall Apart, that's followed by The Forgotten Way which has a great mix of classical instruments driving right through its veins, Running In Place follows on with beautiful backing vocals that supplement Billy's powerful voice to perfection,

May You Keep Well starts off with a 1980’s feel but quickly turns into a gripping melodic melody. Landmine is already a firm live favourite and it comes to life here and ends with a crashing crescendo that could bring a tear to the hardest of humans.

Hold Me Loneliness has a real catchy riff that has me thinking of what could have happened if ELO had met up with Moby. No Need To Explain brings the band back to basics and is sure to be a permanent fixture on future tour set lists, as is the title track This Is Your Life where the pounding drums lead up to rousing chorus that will have you singing along to long before you realise, the ending lines of “knock me down my friend, I’ll just get back up again” perfectly sums up the whole band.

The album closes with the track Days Roll By, yet another masterful mix that slowly climbs through its early verses and ends up leaving you fully caught up, hook, line and sinker. Quite simply, you need to listen to Augustines music, buy their albums, go and see them perform at one of their incredible live shows and then come back and tell me what a great recommendation I gave you.

Email ThisBlogThis!Share to TwitterShare to FacebookShare to Pinterest
Labels: Augustines