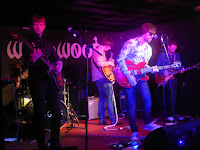 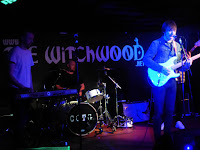 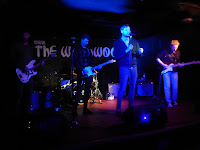 Sunday night in Ashton-Under-Lyne isn't where you'd expect to see three great bands on the same bill, but tonight's show demonstrated that there's still life in the suburbs away from the city centre venues that dominate the North West music scene. Tameside's very own Control Of The Going head up a bill with The Jungfraus and The Maitlands.

It's thirty years since we saw our one and only gig at the Witchwood (Inspiral Carpets) and nothing has changed much about the old place. Whilst other venues have come and gone and been forgotten about, it has bucked the tide of closure and convertion to a pub that serves overpriced food off a shovel to the nouveau hip. It's a proper gig venue that pays attention to the unfashionable fundamentals like a decent sound set-up and affordable booze.

Opening up are The Maitlands. It's impossible to write about them without immediately honing in on front man Carl L Ingram. The L is important he tells us later. He introduces second song Kingdom United as "being about, who gives a fuck about what it's about" and a song later in the set as "a modern classic, I wrote it" and he's being deadly serious. This makes us warm to him as the world is full of anodyne front men that say little and do even less. He chastises his band mates, playfully taking the piss out of them and himself.

Such shenanigans don't take away from the fact though that The Maitlands are an impressive unit as a band - the aforementioned Kingdom United declares "love will always find a way, stay with me awhile" and at that moment the bloodied darkened world-weary romanticism that flows through their songs is at its most evident. Their songs draw you in with irresistible hooks that all great alternative pop-tinged bands trade in and they reveal themselves to be something very different than first impressions. 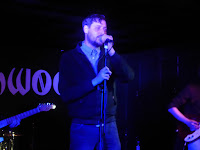 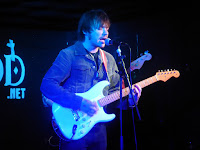 Next up are The Jungfraus. Last time we saw them we described front man Mick as having something of the Jarvis Cocker about him. Either we were pissed or he's changed, but what clearly hasn't is the fact that The Jungfraus are one of the most impressive bands in town even if they might, should fate and good fortune not intervene, go down as one of those lost brilliant bands that people go on about endlessly should their already-recorded second album never see the light of day.

The likes of Roll The Dice, Cow Punch Kiss and Eleanor are the work of a band that's got an cyclonic energy at its core that propels them along, whether it be guitar or keyboard led (as on their penultimate track and set highlight Motor Man), always on the edge, thrilling rhythm that's married to an innate understanding of what makes a great song. Irrational Projections, a song that must lay claim to one of the greatest titles ever, is dedicated to a guitarist who is "no longer with us" and as we sigh Mick tells us "he's in Los Angeles." We love The Jungfraus and so should you.

It's been a huge year for Control Of The Going. It's difficult to remind ourselves it's less than a year since their debut gig and they've established themselves as one of the leading lights on the burgeoning scene that anyone with a vague notion of being psychedelic is being lumped into in Manchester. They are one of the innovators though, along with those that run the nights at Astral Elevator and Aatma, they see beyond the city's boundaries and look further afield for inspiration and devotion. 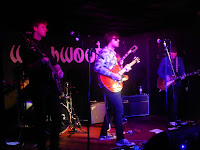 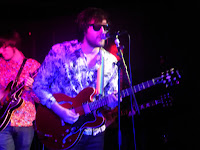 There's six of them up on stage and whilst that does sometimes leave them fighting against each other sound-wise, out of that cacophony, that blurred wall of noise comes real beauty - The Message from their debut Epilepsy Bus Ride EP is a case in point and has set the bar very high for them from the start. However the likes of Wild Flower and their final song and probable future single She are more than up to the mark. What we're waiting for now is the moment when they ditch the shades and turn all that power they're creating on stage on to us in the audience and hit us straight between the eyes rather than directing it internally - the way The Lucid Dream have done - because at that moment they'll unleash all that potential and become the leaders of the "scene" (in very inverted commas) themselves.  You can feel that wave coming.

Email ThisBlogThis!Share to TwitterShare to FacebookShare to Pinterest
Labels: Control Of The Going, The Jungfraus, The Maitlands