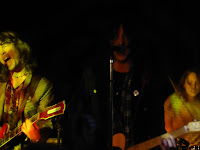 Ahead of a busy festival season, Cupids took to the stage at Aatma for an intimate warm up show. Mixing some of their recent singles as well as some brilliant new material they charmed an audience of all ages.

There's a lot of love in the room for Cupids and they're a band that always pay that back in spades. Ostensibly a four piece, they never conform to a standard band line up though. They interchange instruments, swap over or often share lead vocal responsibilities and they radiate an absolute unconditional love of what they do and tonight is no exception. Jake and Sid swap instruments, move from guitar to keyboard, from lead to backing vocals throughout whilst Ryan on bass adding backing vocals and James on drums, almost hidden at the back of the stage visually but not sonically, provide a driving rhythm blueprint from which to work from. 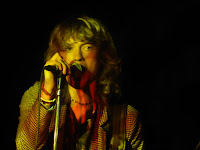 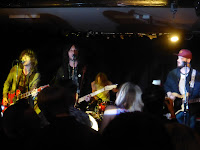 Cupids' history means that they're already having to make tough setlist decisions to squeeze their new material into the time slots they're allocated such is the depth and quality of the material they have at their disposal. New song Study In Extremes is a case in point; they're a band still looking to take the incredible talent they possess in new directions.

The only problem perversely that they might encounter is that they're almost too good musicians to make the crossover - it's a fine balance that they'll need to tread between accomplishment and immediate accessibility that someone like Blossoms possess. They do it on the likes of No One Talks and the final hammer blow of recent single Kickin' In and Money, but you feel like they could break out into a twenty minute prog rock jam, have people staring agog at them and be the happiest band in the world.


Cupids are almost a genre to themselves, a point where decades of music collide, many bands combine into one, pop duels with rock, where influences are just that rather than an immovable template. Who knows what the future holds for them and whether they'll make that breakthrough their unquestionable talent truly deserves, but they're a very special band indeed.