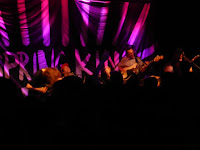 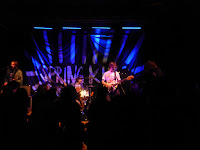 Before taking on bigger halls around the land in the autumn, Spring King returned home to Manchester to celebrate release day of their debut album Tell Me If You Like To in the intimate hot and sweaty surroundings of The Band On The Wall. Support came from Kent's Get Inuit making a welcome return to the city.

It's about eight months since we last saw Get Inuit and how they've changed. They had the songs back then, but what they've developed into, and eight months can be a long time in a band's progression, is a genuinely fierce and unmissable live band. They've bulked out, beefed out and, as witnessed by the growing mosh pit and the fearless stage divers, they've got themselves an audience that has fallen hook, line and sinker for their art-school angular tinged head-on approach to their songs.  When they do take their foot off the accelerator pedal, it's to regroup and come back even harder and it's made a connection between them and their fans in a way that opening bands up and down the land would kill to manage. With a growing band of followers and an increasingly impressive set of singles behind them and with songs like Stuck In The Mud and Barbiturate in their canon, they'll be headlining places like this and bigger themselves within twelve months. 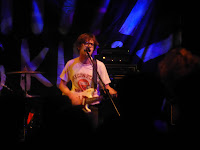 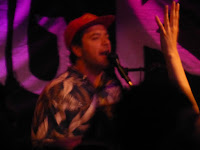 Spring King have been around Manchester for three years now, around the time we moved back to the world's greatest city and this is for some unknown reason the first time we've seen them. It probably won't be the last though. The Band On The Wall is rammed, as you'd expect for homecoming heroes playing their last show of this size before they go nationwide, and it's a youthful audience that makes us feel old that greets them and then proceeds to not stop bouncing, moving or stage diving for the forty-five minute eleven song set that mixes tracks from their debut album with some of their early singles.

For those that don't know them, their singer Tarek is also their drummer, which makes for awkward viewing in a venue like this, but it never once detracts from the impact they have. By default they play most of Tell Me If You Like To and the set builds like a runaway snowball barreling its way down a mountain-side until the point where nothing can stand in its way. The likes of The Summer and the album's title track set the tone, the mood and the temperature for what's to come. They're a band that feeds off the energy of the crowd and vice versa, the bouncers doing a sensible but necessary job in just about keeping order whilst everyone around them is lost in the music and the moment.

Like most of the best bands coming out of Manchester at the moment, you know the ones we write about all the time, Spring King have a sound that is unequivocally them yet they manage to create songs that never once sound like the last one. Detroit, They're Coming After You, Mumma, Who Are You, Rectifier, Let's Ride and City bring up the end of the set, each one carved out of a belligerent mix of drums, guitar and bass and delivered with a confidence born out of the ecstatic response they receive. Tarek can't stop beaming as he surveys the scene in front of him and as well he might, delivering a debut album and selling out an iconic venue in your home town is the stuff of dreams and Spring King are living in that moment and you feel it might just be the very start.

Email ThisBlogThis!Share to TwitterShare to FacebookShare to Pinterest
Labels: Get Inuit, Spring King