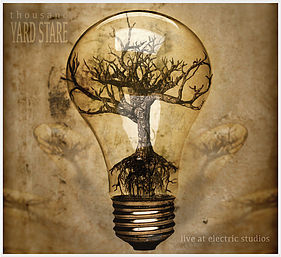 A triumphant return for Slough’s finest, Live At Electric Studios captures Thousand Yard Stare in fine form indeed. Last summer Even The Stars ventured down to a hot and sweaty Borderline Club in London to witness what was supposed to be a one off reformation gig for Thousand Yard Stare. Such was the success of that night - indeed it was one of the gigs of the year for this blog - that the band decided to carry on, playing well received sets at a few of the big “Indie” compilation festivals with the likes of Inspiral Carpets and The Wonder Stuff.  Earlier this year, the band decided to book some studio time and Live At Electric Studios is the result.

Much like a John Peel session, the band - who now reside all over the UK - had just a short time, in this case 2 days, to lay down an album's worth of material. The results are spectacular. With little or no time for overdubs or re-recording, Live At Electric Studios is like an unofficial “best of” album, capturing the freshness and vibrancy of a much younger band. In their heyday, Thousand Yard Stare were masters of the 4 track ep. They didn't have A sides or B sides and this new compilation reflects that with a splattering of singles, ep tracks and live favourites. With a few new ones thrown in for good measure, this is an intriguing release.

Opening with a spirited rendition of later single Version of Me, it is clear that Thousand Yard Stare still have a chemistry and indeed a groove. This is evident too on the magnificently titled new one Heimlich Manoeuvre. The new material showcased here demonstrates the band still have the knack of producing top pop. Keepsake sounds as fresh now as it did when it filled the air in alternative discos back in the early ‘90s. The instrumental Petichor is shorn of the funky wah wah of its predecessor and there's an almost Hendrix-esq guitar sound created by Giles and Kevin.

There are many highlights on Live At Electric Studios. One of them, Comeuppance wouldn't sound out of place on a Stone Roses record whilst Cottager is dominated by their trademark funky rhythm section, ably provided by drummer Dom and bassist Sean. Songs like Seasonstream make you wonder why Thousand Yard Stare were not Top of The Pop regulars.

Live favourite What's Your Level from the (almost forgotten and overlooked) second LP Mapamundi is singer Stephen's finest moment on the album. Closing with arguably their biggest two songs - 0-0 After Extra Time and the epic Wonderment - it demonstrates what a fine old English pop band Thousand Yard Stare are. Both of  the closing tracks are ones that have me reaching for repeat. Indeed, Wonderment, from their 1990 debut EP is one of my most played records ever.

Live At Electric Studios is a solid, triumphant and welcome return and paves the way for hopefully a full long player of new material. In the meantime, enjoy this one, rediscover their small but delightful back catalogue and catch them on tour this autumn.

We interviewed them here ahead of their Borderline show last year.