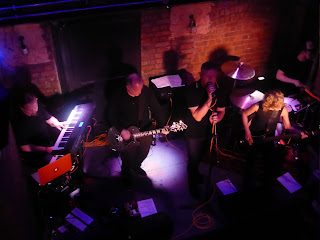 Whilst reunions of Manchester bands that first made their mark around the time the eighties turned into the nineties and the country rid itself of the blight of Thatcher have been making waves for years now, a small but beautifully formed back street boozer amongst the dark satanic new build flats of the western bit of Manchester that's been annexed to form Salford was home to one of the most unheralded and unlikely reunions.

The Rainkings formed out of the split in the road for Inspiral Carpets in 1989 that saw Tom Hingley join and the band head for Top Of The Pops and the charts and Stephen Holt and Dave Swift form a band that bristled and burnt majestically on the Manchester scene without the commercial acclaim that their previous band thrived on. Inspired by Stephen's return to the Inspirals fold and Dave's seeming inability to stop writing song and back with three new members - Cathy on bass, Kev on drums and backing vocals and Paul "Wimmy" Williams on keyboards, The Rainkings revisited some of the finer moments of their past, but also all five songs from last year's excellent comeback EP Fiveways and a further new song called Searcher.  This invite-only showcase is ahead of their official comeback gig proper on Saturday in their native Oldham at Jackson's Pit.

Opening up proceedings is Manchester's own Ryan Jarvis who delivers an impressive mix of his own material - including his fabulous new single Think About it, which is out today and played live here for the first time and its b-side Alright - as well as covers of Courteeners' The Rest Of The World Has Gone Home and Echo And The Bunnymen's Nothing Ever Lasts Forever. His own songs tell of life in a northern town, making the transition from teenager to adult with cleverly observed down-to-earth tales of what he observes as with many of Manchester's finest singer-songwriters. There's touches of early John Bramwell in the way he tells those stories too. 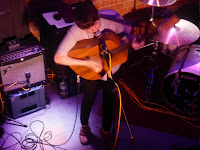 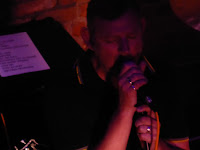 Just after 9.30 and it's show time for The Rainkings. Not showing any real sign of nerves, they're immediately into their stride with In From The Rain from the Fiveaways EP and they sound great. They've been burrowed away in the studio on and off for eighteen months and to some of their fans this night has been a long time coming, but it's immediately clear that the time has been well spent and they've wanted to come back doing this right. The addition of keyboards to many of the older songs gives them a contemporary feel, but the immediate thought is that the lineage is there from that early (and in the opinion of some of us, best) work of the Inspirals - no real surprise given Dave's role in much of the songwriting in that formative period - but without sounding dated at all.

They breeze their way through thirteen songs - almost a 50:50 (6:7) split of new material to old but the life that's been pumped through the older songs such as Take, Get Ready and Step By Step means that it's difficult to tell one from the other. These songs are perfect for Holt's direct vocals - insistent persistent guitar sounds, dark spindly bass lines, thrusting powerful drums and it all imbibed with a flourish of keyboards that recalls but never mimics Mr Boon's Farfisa as well as backing vocals that sit in the right places and add light, shade and some pop tones to some of the tunes.

Whilst people might not be clambering over the Pennines to catch a glimpse of The Rainkings reforming in the way they have for some of their contemporaries from their first wave, this secret reunion is no less important to those that have been waiting a long time for it. There are people travelling hundreds of miles on Saturday to experience this who have been clamouring for it since Stephen rejoined the Inspirals and the Another Time compilation was released in 2013 - it's been more than worth the wait.

The Rainkings' official site can be found here and they are on Twitter and Facebook. Read our 2015 interview with them here and our extensive 2013 pre-Even The Stars one here.

Email ThisBlogThis!Share to TwitterShare to FacebookShare to Pinterest
Labels: Ryan Jarvis, The Rainkings